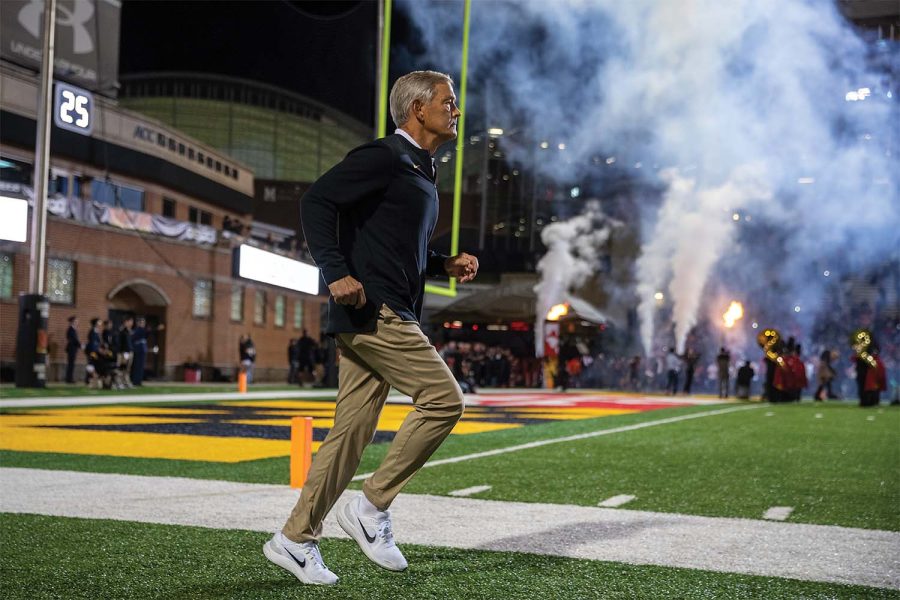 The Hawkeyes' hope of winning the Big Ten West is still alive, even after losing to Purdue before the bye week.

Above a set of doors and below a picture of Iowa’s iconic pregame swarm, a sentence is spelled out in gold lettering on top of a black background inside the practice field at the Hansen Football Performance Center:

“The road to Indianapolis travels through these doors.”

Lucas Oil Stadium in Indianapolis is the annual home of the Big Ten Football Championship game. Recently, despite the reminder written out next to the program’s conference championship banners that hang on the wall near the doors to the indoor field, a trip to the title game has evaded the Hawkeyes.

While reaching the conference championship is one of the Hawkeyes’ goals every season, Iowa hasn’t made the trip to Indianapolis as the winner of the Big Ten West division since 2015.

Wisconsin (three times) and Northwestern (twice) have represented the West since Iowa won the division six years ago.

But after a 6-1 start through the first seven games of 2021, Iowa controls its own destiny regarding the Big Ten’s biggest game: Win out and you’re the Big Ten West Champions.

“We are working on some things during this pause in our schedule as we head into our final five games,” offensive coordinator Brian Ferentz said during the bye week. “The goal is to play relevant football in November, and the rest is up to us.”

Playing in Indianapolis has been a season-long goal for the Hawkeyes every year since the conference began playing a championship game back in 2011. Reaching that goal means being the best in the West division of the Big Ten. Through seven games this season, Iowa is tied at the top of those standings.

Coming up just short of a division title has been a theme for the Hawkeyes lately — especially in close losses to the Badgers and Wildcats in previous years.

In 2018, Northwestern clinched the division with a 14-10 win over Iowa at Kinnick Stadium. A season later, a Nate Stanley quarterback draw on a two-point conversion attempt came up just short, and Iowa lost to Wisconsin by two points to fall out of contention for the division championship.

Last season, even though Iowa won six-straight games to close out the COVID-19-shortened schedule, back-to-back losses to Purdue and Northwestern to start the season cost Iowa — particularly the home loss to the Wildcats, where the Hawkeyes surrendered a 17-point lead.

Northwestern represented the West in a 22-10 loss to the Ohio State Buckeyes in the conference championship game last year.

This season, however, standing at 6-1 with five regular season games remaining, Iowa and Minnesota co-lead the division and with a matchup with the Golden Gophers looming in three weeks.

“A week at a time,” junior tight end Sam LaPorta told reporters on Tuesday. “We got five more and you know, if we win out, of course, we lock ourselves into [winning] the Big Ten West and Big Ten championship game. That’s our goal and we’re gonna try to do everything we can to get there.”

Iowa and Minnesota each have 3-1 conference records, followed by Purdue and Wisconsin at 2-2.

The Hawkeyes’ final five games to end the regular season are at Wisconsin, at Northwestern, Minnesota, Illinois, and at Nebraska.

Aside from Iowa, Minnesota closes the season with Northwestern, Illinois, Indiana, and Wisconsin, while the Badgers face off against Rutgers, Northwestern, Nebraska, and Minnesota.

This weekend’s game against Wisconsin is pivotal — as are all five remaining regular-season contests. With a win, Iowa would move to 4-1 in conference play and drop Wisconsin to 2-3. With a loss, both the Badgers and Hawkeyes would be 3-2 in the conference, but Wisconsin would hold the head-to-head tiebreaker, taking Iowa’s fate out of its hands once again.

Junior safety Kaevon Merriweather stressed that, while every game is important, the late-season matchups hold more significance in determining standings.

“We always say that we have to win in November,” Merriweather said on Tuesday. “In the November games, it’s really important because that’s really what entails how the rest of your season’s going to go. We understand how we need to play and what we need to do.”

And the bye week almost perfectly separated the pre-November games from the rest of the season. Merriweather said his team finished their first season 6-1 and is 0-0 in the second part of this season.

That “fresh start” mindset, aided by the placement of the bye week, is something the Hawkeyes have taken to heart — especially after their worst performance and only loss of the season on Oct. 16 against Purdue.

After nearly every member of the team took some time away from football — Kyler Schott went duck hunting with some teammates on the offensive line and LaPorta played golf — the Iowa-Wisconsin showdown is an opportunity to turn the page.

LaPorta is excited to see how his team responds to its first setback of the season.

“It always feels good to, you know, come back and show that we can bounce back from things like that, and good teams usually do,” LaPorta said.  “I mean, I don’t know if I’d say it’s a statement game, but we stubbed our toe and we’re gonna try to bounce back from it.”

Offensively, junior running back Tyler Goodson said while he used part of the week off to rest and recharge, he and his teammates worked on consistency in the running game. Iowa has rushed for over 140 yards in three games this season but has been held under 80 yards on three other occasions.

“Consistency is the main thing,” Goodson said. “Week in and week out, we always try to focus on consistency. But every game is not going to be what you want it to be. You might play one week where you’re averaging six, eight yards a carry. Next week you might go into a game, average three to four. We know [Wisconsin] has a strong defensive front so we’re expecting a good game from them.”

The Heartland Trophy — Schott said — is one that will be won in the trenches.

Iowa regained possession of the Heartland Trophy last season after defeating Wisconsin 28-7 at Kinnick Stadium. The Badgers had won the last four before last year’s contest. Now, the Hawkeyes want to start a streak of their own.

Iowa vs. Wisconsin is almost always a grind-it-out, smashmouth, physical game — one the Big Ten traditionalists love — and this year should be no different.

Multiple Hawkeyes said the two teams were mirrors of each other: Gritty teams that win with defense, the ground game, and an occasional play-action-pass. They each know what each other team is going to do — it’s largely a matter of execution.

Merriweather remembers marveling at the hard-hitting affair during his freshman year.

“I remember my very first Wisconsin-Iowa game,” Merriweather said. “I remember the O-line and D-line just clashing every single play. And I was on the sideline like ‘Lord, I don’t know how in the world I’m going to be able to ever play in a game like this.’”

While the narrative this season has been every game is meaningful, does Merriweather get pumped up just a little more for the battle with the Badgers, particularly with all the Big Ten implications on the line? 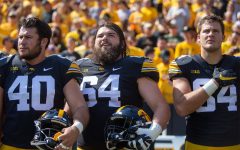 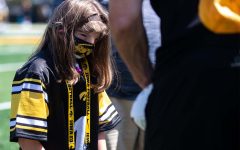 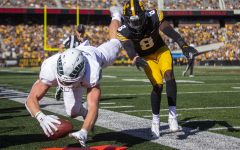 Around the Big Ten: Matchups, power rankings for Week 9