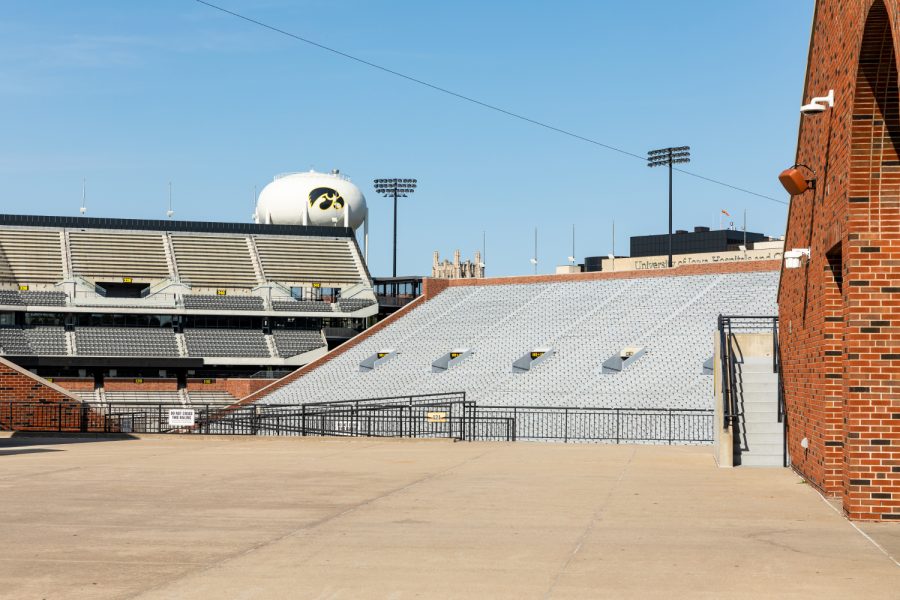 Empty stands at Kinnick Stadium are seen on what would have been the football season opener on Saturday Sept. 5, 2020.

Howard Samek had attended 494 consecutive Hawkeye football games, home and away, dating back to 1979.

That streak was disrupted this fall. It still remains on hold.

The Big Ten announced on Aug. 11 that all fall sports would be postponed to a later date. The conference then amended its stance Sept. 16, allowing its football teams to play a nine-game, league-only schedule this fall, while the rest of the sports remain in limbo.

On the same day the conference announced football’s return, Penn State Vice President for Intercollegiate Athletics Sandy Barbour said that no fans would be allowed in Big Ten grandstands this season — with the exception of players’ immediate families.

Despite that, and having already missed Iowa’s contest with Purdue, Samek is determined to get into games this season.

“I’ve been pursuing everything I can to find a way to get into the games,” Samek said. “I haven’t had any success yet, but I have a couple possibilities that haven’t been completely ruled out. I guess if I’m not able to go it would be the so-called asterisk on the record. There’s a lot of sports records that have asterisks and that’s, I guess, what it would be. I would not say it was stopped, but I would much rather not have an asterisk. I’m begging everybody that I know, trying to find any possible way to get in.”

Samek isn’t the only fan having his game-day traditions disrupted this fall.

Ted Pacha — for whom Kinnick Stadium’s new north end zone club is named — has been attending games since the stadium was called Iowa Field, and he sold refreshments on game day.

“I wouldn’t say two words to anybody,” Pacha said. “I wasn’t exactly a talkative kid. I was smart enough to know that the first few games when it was warm and hot, people would drink ice-cold pop. That’s back when it was in cups, you know, paper cups and ice. I’d go up and stand in a section and my tray would empty and I’d run back down and get it filled. The more times you got it filled, the more money you made. Then in the colder months, a little birdie told me maybe hot chocolate should be sold up there, so I did that.”

Pacha would go on to become president of the Johnson County and National I-Clubs. He’s also been a season-ticket holder since the late 1960s, and he made a $5 million leadership donation toward Kinnick Stadium’s $89 million restoration project that includes the north end zone club.

Although the era of pop in paper cups at Kinnick Stadium has since gone by, there are some that can still recount the time. They are living, breathing history books containing a seemingly infinite amount of Iowa football knowledge.

Doris and Dale Woods have been married for 56 years, and they remember listening to former radio play-by-play broadcaster Howdy Roberts call some of the first Iowa football games they ever listened to as children.

The pair has held season tickets to Hawkeye home games since 1973, but Dale attended games long than that. In his younger days, Dale would travel to Iowa City from Des Moines, sometimes taking a train.

Doris and Dale recall a time when Iowa football games were treated as formal events.

“When we first started going with season tickets, the women dressed up to a ’T’ [and wore] high heels,” Dale said. “Men wore sport coats, and I don’t want to say ties, but some were wearing ties.”

“You had to wear your good coat and pantsuits and be all dressed up,” Doris added. “I was always freezing because I wore shoes that weren’t boots by any means. I was always worried about somebody behind me throwing up on me or throwing beer on me or stuff like that.”

The Woods’ don’t dress in their Sunday best to attend Iowa games anymore, and this season, they’re just hoping they have a chance to watch a Hawkeye football game from Kinnick Stadium.

“We’re not sure how it’s going to play out,” Dale said. “We have enough confidence in our athletic department that they will have a safe enough plan, and when Iowa does allow fans in the stands, I think it’ll be OK. . . I know it’s going to be different from previous years, whatever happens. Whether they allow some fans in the stands or watching it all on TV, but we’ll deal with it. We want to be in the stands, not only for our entertainment, but just to show support for our coaches and our football team.”

Iowa Athletics Director Gary Barta said on Oct. 1 that there is “wiggle room” that could allow fans in Big Ten stands toward the end of the football season.

“I know there’s been talks, eventually of hoping that we can have fans come in later,” senior kicker Keith Duncan said. “Personally, I’d love to see students come in. I was watching a Texas game and I think they tested their students, so they were allowed to come in. In a safe environment, I think that’s a great idea. I’d love to see that. They’re extremely involved in our university. They support our athletics and I think for at least them to get in as well as our family, and hopefully as many people as possible if there are safe conditions.”

Fans such as Will Moon — a 20-year season ticket holder and Iowa 80 Group President — are hoping they can find their way into Kinnick Stadium’s grandstands this season. However, they are making alternative arrangements in case stands remain fan-less all year.

Meanwhile, the Woods will try to minimize risks if they’ll be watching games from home this season.

“With the virus and stuff, I think we’ll just watch it alone,” Dale said.

“A lot of our friends are the same age we are and they have as many concerns about [COVID-19] as we do,” Doris said. “I can see a lot of people staying home or being with family.”

Fans aren’t the only ones affected by the Big Ten’s decision to empty bleachers and seats across the conference. Players and coaches are also feeling the repercussions — some of them not entirely harmful.

Without fans in the stands, normally raucous stadiums will be silent. For offenses around the Big Ten, quieter venues will likely translate to higher efficiency on offense.

“That definitely helps, especially at away games,” center Tyler Linderbaum said. “I mean, we’re seeing this right now in the NFL. A lot of teams are going hard counts and don’t have to worry about the fans and going on silent counts, which is nice. You know, playing away games, especially where you’re at, it plays a huge role in those third down situations where it gets pretty loud and hectic. To not have that this year, I guess there’s a benefit for us on offense when we do have to face third downs and we don’t have that crowded place to worry about.”

“I think it’s gonna benefit a lot of offenses, especially in our conference where you know every road game, for the most part, is a challenge because of communication,” said sophomore quarterback Spencer Petras, in his first season as Iowa’s starter. “It’s going to be great. You know, we’ve got some road games this year that I think it’s going to be better for us that there’s no fans. Communication will be easier. I’ll be able to work the cadence more, that kind of thing.”

Empty stands don’t affect everyone though. For Kinnick Stadium public address announcer Mark Abbott, Saturdays this fall will be the same as they’ve always been for him — even if there isn’t a public around for him to address.

“That, quite frankly, has little impact on me,” Abbott said. “I’m preparing just like the stands were full. The intention, from what I understand, is to try and make the experience for the student-athletes as normal as possible. So, my intention is to call down and distance, who ran the ball, who made the tackle, who threw the ball, who caught it, that kind of thing. So, that part of my job isn’t going to change at all. I’ll prepare like I normally would. I’ll look at the opposing team’s roster and work on pronouncing the difficult names on their team. None of that will change. . .We’ll just go about doing things like we normally would.”

While Iowa’s game-day operations team is trying to keep things as normal as possible this season, Abbott said he does not know if traditions such as playing AC/DC’s “Back in Black” as the Hawkeyes take the field will happen this year. The Pancheros Burrito Lift will be featured on the video board with virtual submissions from Iowa fans.

Instead of Hawkeye supporters dressed entirely in Black and Gold sitting in the stands, cardboard cutouts of fans will fill sections of the bleachers on game day.

Kinnick Stadium won’t be the same on Saturdays this season. The bleachers will be without roughly 70,000 cheering fans, leaving the field quiet. But for Iowa defensive end Chauncey Golston, football is still football, regardless of stadium capacity.

“If you’re playing the game of football, if you need someone to give you juice, then you’re playing the wrong game,” Golston said. “Like, I don’t know how to bring the juice. You’re already going to have the juice if you’re out there and you’re ready to go.” 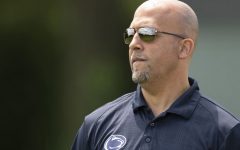 Around the Big Ten: Week 2 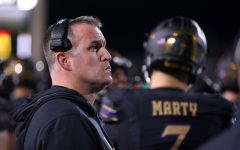