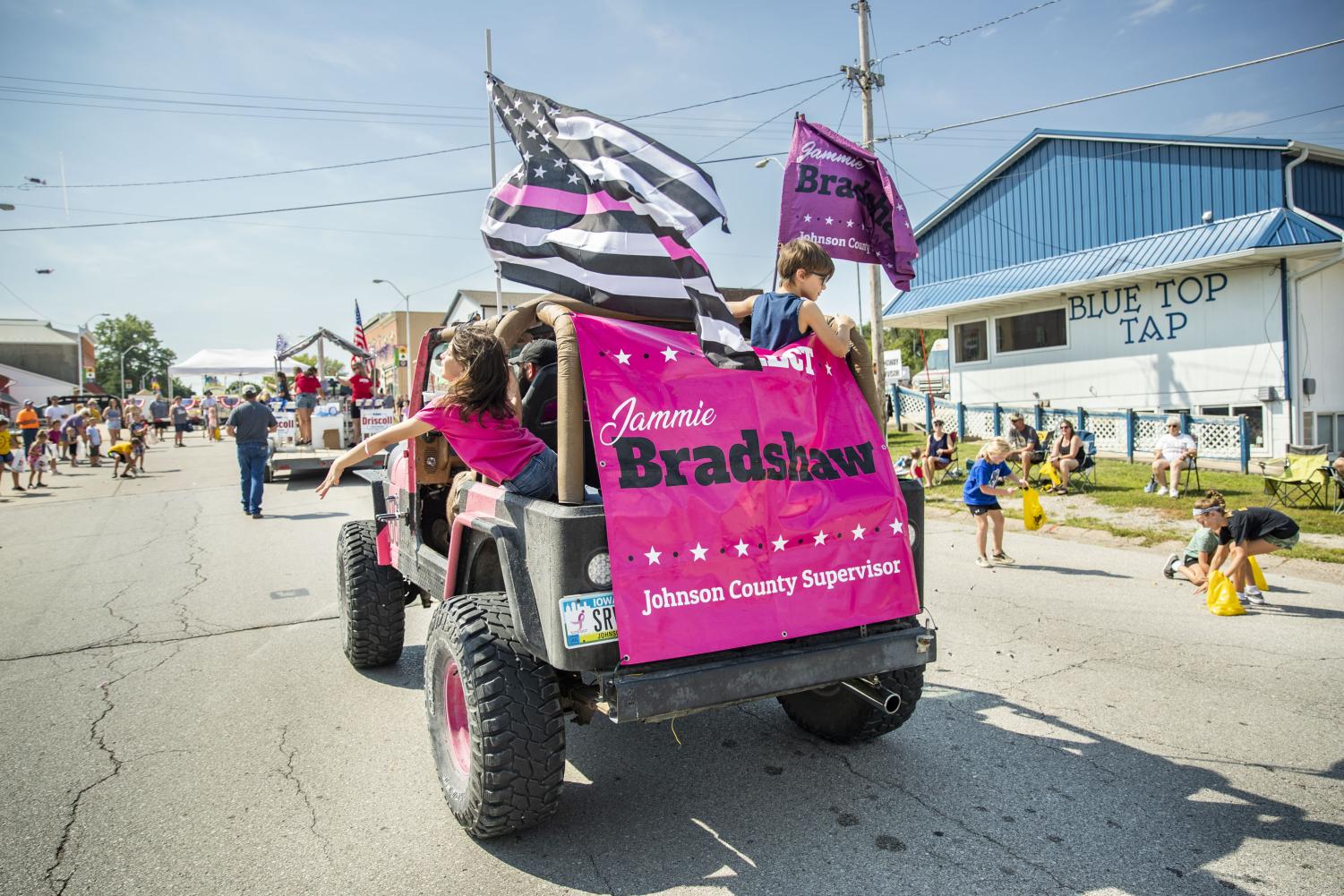 Harmony, 8, and John, 6, throw candy from the family’s Jeep during a parade in Lone Tree, Iowa, on Aug. 27, 2022. The family decided to paint the jeep hot pink to pay tribute to Jammie’s fight against breast cancer. (Grace Smith)

Harmony, 8, and John, 6, throw candy from the family’s Jeep during a parade in Lone Tree, Iowa, on Aug. 27, 2022. The family decided to paint the jeep hot pink to pay tribute to Jammie’s fight against breast cancer.

Trials and triumphs: Jammie Bradshaw’s path to Johnson County Board of Supervisors candidacy

Veteran, breast cancer survivor, and mother of four, Jammie Bradshaw hopes to continue serving the public and make Johnson County stronger. She will run as a Republican for one of two open seats for Johnson County Supervisor.

Jammie Bradshaw and her husband, James Bradshaw, ride in the front seats of their rundown, do-it-yourself hot pink Jeep during a parade near their rural home in Lone Tree, Iowa, on Aug. 27. A banner zip tied to the back of the vehicle reads, “Jammie Bradshaw Johnson County Supervisor.”

Two flags — one pink American flag and a flag promoting Jammie — fly above the back seats where the Bradshaw children — Harmony, Heather, John, and Cheyenne — sit, throwing handfuls of Tootsie Rolls and glow sticks to parade-goers.

Whether it’s through road trips aboard the colorful Jeep or adventures through the Maquoketa Caves, the Bradshaw family always finds a way to stay connected. And that family connection has remained true during Jammie’s campaigning and preparation for the Nov. 8 general election, where she is a Republican candidate running for one of two open Johnson County Board of Supervisors seats. She isn’t the only Republican in the race, with Phil Hemingway also making a bid. The two were uncontested in the June Republican primary.

Her family is essential to her campaign, participating in various events to promote her candidacy.

“We are very, very close to family,” Jammie said. “[The kids] are what’s important in mine and James’ life. So I have to go out, I have to do these events, I have to door knock. I have to interact in order to do this election. But at the same time, I can take them with me.”

James bought the Jeep Wrangler — which was originally green — in May to lift Jammie’s spirits while Jammie battled breast cancer after being diagnosed with MHS6 in 2020. MHS6 is a genetic disease that increases the risk of certain types of cancer, including colon and rectal cancer.

Because of her genetic disease, Jammie said her cancer could come back in a different area at any time.

“My husband’s brother used to say, ‘Embrace the suck and go on,’” Jammie said. “I’ve decided I refuse to let this or anything else stop me.”

As a breast cancer survivor and a U.S. Air Force veteran who spent 10 years serving her country from 2010-20, Jammie and her husband want to continue serving to make the county community stronger.

“James and I have always been big community service style people,” Jammie said. “We have always believed that if you want to make any place the best it can be, you really have to be willing to put in that work.” 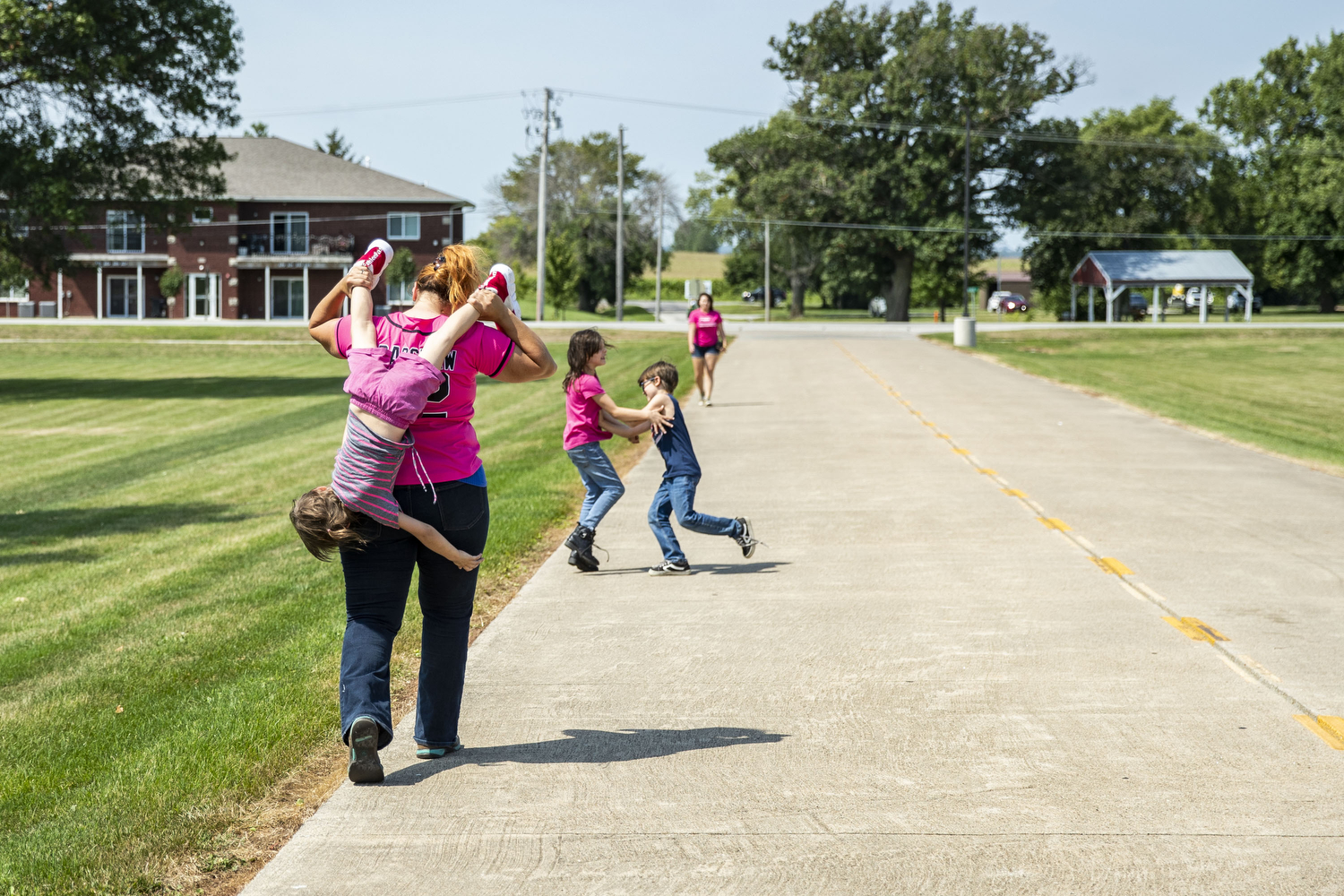 “We are very, very close to family,” Jammie said. “[The kids] are what’s important in mine and James’ life. So, you know, I have to go out, I have to do these events, I have to door knock, I have to interact in order to do this election. But at the same time, I can take them with me.”

Jammie and James met during their time in the Air Force — Jammie ranked as a Senior Airman (E-4) and James a Technical Sergeant (E-6). For the first nine months of dating, the couple was countries apart — with James in Kurdistan and Jammie in Germany.

Now, James refers to Jammie as his lifelong battle buddy, a term used in the military to describe two members of the military who always have each other’s support.

“We come at our marriage that way,” James said. “We stick it through thick and thin. We fight each other’s battles.”

“It’s us against the world,” Jammie added.

After the two returned from deployment, they got married in 2013 and moved to Oklahoma in 2014, continuing their life as a couple and military personnel.

At the end of 2018, Jammie received a job offer to be a drone operator for BladeEdge in Johnson County. The company flew the Bradshaw family to visit Iowa, and Jammie knew her family would call it home immediately.

“We fell in love with Iowa,” Jammie said. “It felt like home. So, we stayed.”

Shortly after the six Bradshaw family members moved to Lone Tree, Jammie and James got involved with Johnson County Republicans of Iowa and learned there were two open seats on the board. Although Jammie doesn’t refer to herself as a politician, her passion for helping others compelled her to run.

“The plan was just — how can we help? How can we make this the area we want our kids to grow up in?” Jammie said.

From March 21 to July 6, Jammie received $2,323.95 in contributions to put toward her candidacy, according to the Iowa Ethics and Campaign Disclosure Board. 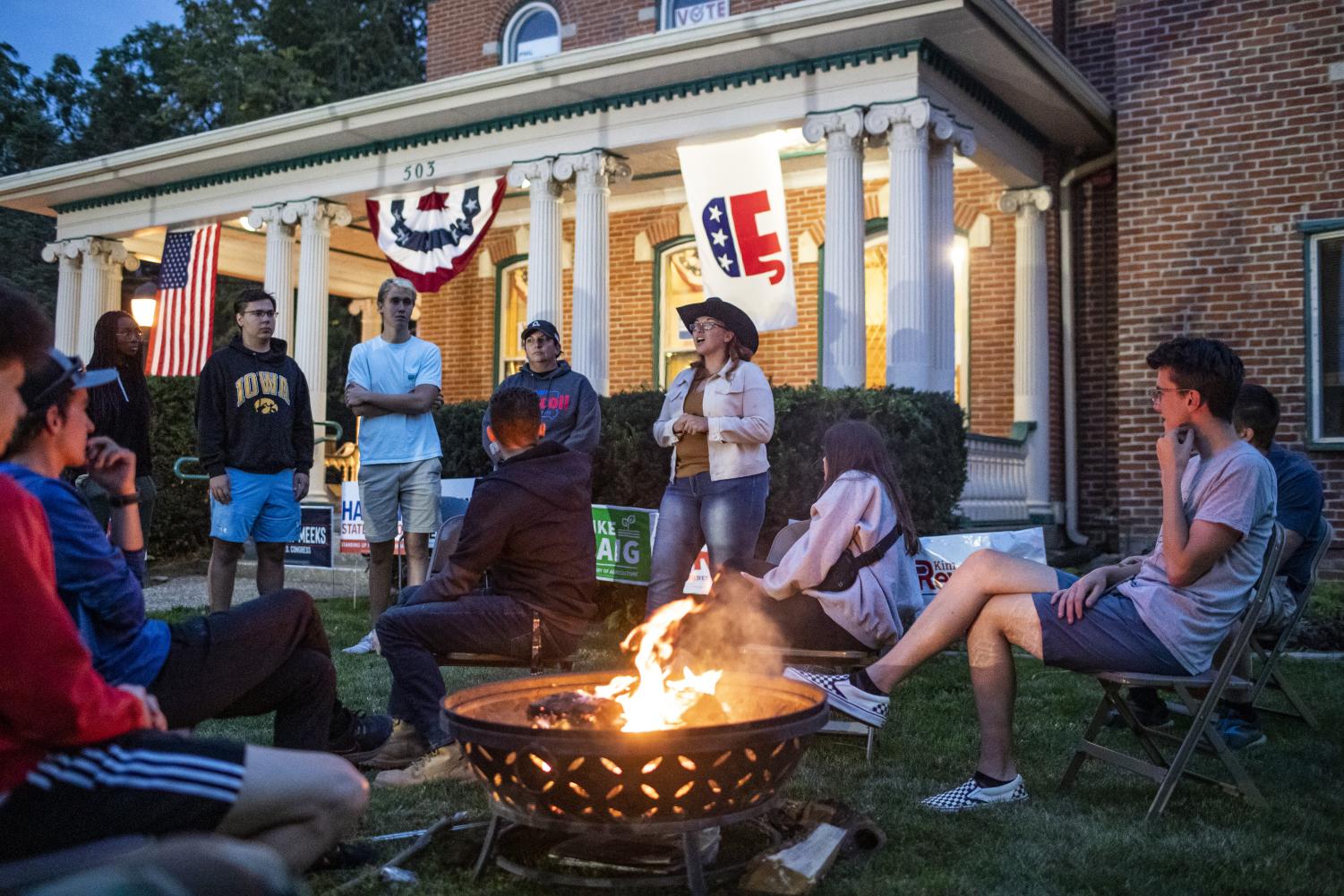 The six Bradshaw family members moved to Iowa in 2019 From Wayne, Oklahoma, after Jammie received a job offer to be a drone operator in Johnson County. Shortly after their move to a home outside of Lone Tree, Iowa, Jammie and James got involved with Johnson County Republicans of Iowa and learned there were two open seats on the Johnson County Board of Supervisors, so she decided to run. “I’m not a politician,” Jammie said. “I’m not all polished and glamorous… I want to try and help out.”

While in the military, Jammie said she constantly worked with people from different backgrounds and different cultures, which she said informed her decision to run for supervisor.

Jammie’s main focus is to work for residents on issues she stands for, including fixing Johnson County farmers’ ordinances by preserving livestock confinement spaces. As of 2019, the board operates under the Iowa Department of Natural Resources’ “master matrix,” a process in which elected officials can offer suggestions on confinement feeding operations.

Living in a rural area and owning 11 heads of cattle, Jammie wants to represent farmers on the board.

Along with representing rural Johnson County, Jammie wants to address property taxes, which she said are far too high and drive community members out of the county.

Each member of the current board makes about $89,000 a year as of February. Jammie said if she were in the board’s shoes she would lower her salary to keep residents’ taxes lower. In February, the supervisors voted to increase their salaries by 2.25 percent and raise all other elected officials in the county’s salaries by 4.42 percent.

Jammie said she puts the community first by campaigning with college students and listening to their issues.

After listening to students, she said the University of Iowa College Republicans and other Republican students have not been treated fairly based on their political views. Jammie enjoys being someone students can turn to about life — not just politics.

“Right now, a lot of these students are forgotten or even tormented,” Jammie said. “So having someone be there for them, even if it’s just little old me … I think that means a lot.”

Micah Broekemeier, the central committee candidate chair for the Johnson County Republicans, also works closely with students. He said Jammie’s drive to help the Hawkeyes be heard is valuable for Johnson County.

Broekemeier briefly ran for the board in 2021 in the delegate primaries but lost to Phil Hemingway, who went on to lose to Democrat Jon Green in the special elections. After the loss, Broekemeier stayed involved in politics and attended meetings, where he met Jammie and James.

Broekemeier said a fresh face like Jammie to the Republication Party — alongside her motivated personality — is just what Johnson County needs.

Although Jammie believes in more Republican-based viewpoints, she said people should vote based on candidates, not party lines.

“If we’re going to provide the best option around, then we need to have people of all backgrounds and people of all parties involved in order to really give that different perspective,” Jammie said.

Jammie hopes to provide a different perspective for the board by creating more balance between parties.

In the military, the person who conducts mission planning is a buffer or liaison for all other members in the aircraft. Their role is to maintain stability and safety among all members on the flight. James said the board is similar, and Jammie could serve as the voice of Johnson County.

“She’s got that background to make it to where she will feel comfortable standing her ground … knowing that life would be better for constituents of Johnson County,” James said. “I really feel like it’s a really good match for her.”

Editor’s Note: This is part one of a two-part series profiling candidates for the Johnson County Board of Supervisors ahead of the Nov. 8 election. Read coverage of Jon Green’s early political life and campaign for re-election, released alongside this piece. Part two of this series releases on Oct. 17 in print and online.