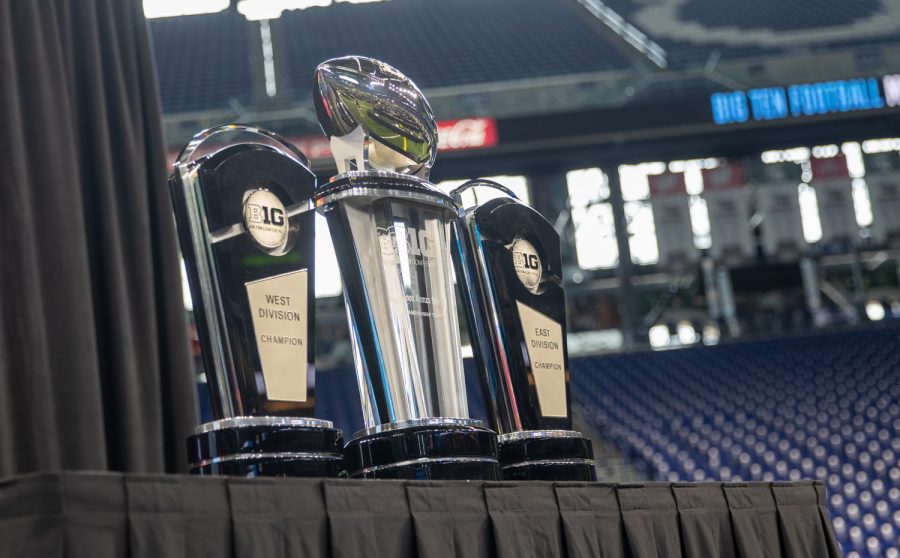 The Big Ten Championship Trophy is shown during day one of Big Ten Media Days at Lucas Oil Stadium in Indianapolis, Indiana, on Thursday, July 22.

The Iowa football team is one win away from the program’s first Big Ten title since 2004 and first outright conference championship since 1985.

Linebacker Jack Campbell approached his locker in the days following the Iowa football team’s 27-7 loss to Wisconsin in October. The team captain noticed a piece of paper waiting for him next to his pads. Every other Iowa player found one, too. A single sentence stood out on the sheet. It was a quote head coach Kirk Ferentz wanted the Hawkeyes to soak in.

“If you learn to use it right, the adversity, it will buy you a ticket to a place you couldn’t have gone any other way,” the note read.

Ferentz was quoting what Virginia men’s basketball coach Tony Bennett said to his team after the Cavaliers became the first No. 1 seed to lose to a No. 16 seed in the NCAA Men’s Basketball Tournament in 2018. The 23rd-year Hawkeye head coach figured his team needed a similar message eight games into the 2021 campaign. It stuck.

After starting the season 6-0 and reaching No. 2 in the country in the Associated Press Poll, Iowa lost back-to-back games by double-digits to Purdue and Wisconsin. The Hawkeyes no longer controlled their own destiny to win the Big Ten West. It turns out, that didn’t stop them from winning the division, anyway. Iowa, even through losses, quarterback changes, and a 15-point deficit in a must-win season-finale, made a habit of working its way through roadblocks. The Hawkeyes, apparently, learned to use that adversity. And they used it to buy themselves a ticket to the Big Ten Championship Game.

“We were 6-0 and had everything going in the right direction,” Campbell said. “And then we just got punched in the mouth. Taking that adversity and using it the right way, it brought something more out of this team. I’m excited to see us continue to do that. Finding ways to win, that’s the name of the game right now.”

After losing back-to-back games, the Hawkeyes won their final four contests of the regular season, all by 10 points or fewer, to clinch a share of the West. When Minnesota upset Wisconsin a day after Iowa scored the final 22 points of its 28-21 comeback win over Nebraska, Ferentz’s team became the outright Big Ten West Champions and advanced to the program’s second Big Ten Championship Game and first since 2015.

A win on Saturday would mark Iowa’s first Big Ten title of any kind since 2004 and the program’s first outright conference championship since 1985. Defeating the Wolverines would also almost certainly send the Hawkeyes to the Rose Bowl.

But there is still plenty of adversity in front of the dark horse Hawkeyes.

“It seems like every time we go to a bowl game or a game like this, we’re underdogs,” Ferentz said. “We’re a little bit used to that.”

Iowa opened as 10.5-point underdogs to Michigan ahead of the conference title game. The Wolverines are fresh off a 42-27 win over Ohio State last weekend, which clinched Jim Harbaugh’s program its first Big Ten East title. Michigan’s only loss this season came when it surrendered a 16-point lead to No. 12 Michigan State.

Ferentz described Michigan as a well-rounded team, and said Harbaugh’s group belongs at No. 2 — or maybe even No. 1 — in the nation. The Wolverines own the No. 2 scoring offense in the Big Ten, paired with the No. 3 scoring defense. Michigan leads the conference in rushing offense and sacks defensively. As far as special teams, Jake Moody was named Big Ten Kicker of the Year for the Wolverines on Tuesday. Defensive end Aidan Hutchinson is the Big Ten Defensive Player of the Year and reigning national defensive player of the week for his 15 QB pressures against the Buckeyes. Running back Hassan Haskins earned national offensive player of the week recognition for his five-touchdown performance in the same game.

As far as Iowa? ESPN’s Football Power Index gives the Hawkeyes only a 23.5 percent chance to win against Michigan.

In a way, neither of these teams were expected to be playing this weekend.

Going into the final week of the regular season, a Wisconsin-Ohio State matchup in the conference title game appeared more likely than the one fans will see on Saturday.

Wisconsin, as a result of its head-to-head victory over Iowa, held a tiebreaker over the Hawkeyes and only needed to beat Minnesota to advance to Indianapolis. Instead, the Gophers beat the Badgers, who were on a seven-game winning streak, for the second time in 18 years.

Iowa players watched the game intently, although in a variety of situations.

Campbell studied the game on his phone while on a hunting trip. Defensive backs Riley Moss and Jack Koerner and their families met to watch the game and tweeted out their emotions throughout the contest. Ferentz occasionally glanced at the rivalry matchup while celebrating a belated Thanksgiving with his family. And by the end of the fourth quarter, all of them knew they’d be back in the football facility the next day to prepare for the Wolverines.

“I don’t think anyone on our team ever doubted what we could do or where we could go,” quarterback Spencer Petras, who will start on Saturday, said. “It’s never fun losing a game. But we all realized that opportunities are still out there. It’s more so people outside of this building that are big on counting a team out before it’s time to count them out. We never wavered in our confidence.”

Even if Iowa’s confidence in itself was never lacking, it might have been close at points.

As Campbell said, Iowa won through a variety of different scenarios this season. The Hawkeyes came back to win from three double-digit deficits over their 12-game schedule. A Nico Ragaini touchdown propelled Iowa past Penn State in a then-top-five matchup that the Hawkeyes at one point trailed 17-3. Charlie Jones’ 100-yard kickoff return sparked Iowa when it trailed Illinois, 10-0. And Henry Marchese’s blocked punt was the start of Iowa’s second-half comeback over Nebraska that earned Iowa the Heroes Trophy and a Big Ten West Champions Trophy.

Iowa won games with both Petras and sophomore Alex Padilla at quarterback.

The Hawkeyes prevailed through losing Moss, the Big Ten Defensive Back of the Year, and fifth-year starting cornerback Matt Hankins, among other players, through stretches of the season.

“They stayed resilient,” Ferentz said. “They just kept working and kept trying to improve. That’s all we ask them to do every week is try to improve. I think they were committed to that.

“We lost a couple games, and a lot of people were pretty low on us, saying we were overrated and things of that nature,” Koerner said. “We knew who we were. We knew that those two losses didn’t define us. All we could do was keep winning games. At the end of the day, it’s just about winning football games and that’s what we’ve been trying to do. That’s obviously what we’re going to try to do on Saturday, too.”

Ferentz stood at a podium at Big Ten Media Days at Lucas Oil Stadium in July. The Big Ten Championship Trophy was being displayed just off the stage.

The last time Ferentz was in that stadium, things didn’t end well for the Hawkeyes. Iowa’s perfect season ended in 2015 with a heartbreaking, last-minute loss to Michigan State. The program’s focus since then has been getting back to Indianapolis. In Iowa’s indoor practice facility, a banner hangs prominently just above the doors to the weight room. Its message is clear:

“The road to Indianapolis travels through these doors.”

The eight words hang just below Iowa’s conference championship banners. A new Big Ten West Champions banner is already on the way. Another banner could be on the way if the Hawkeyes overcome the Wolverines.

“If somebody wants to believe in us to win, that’s great,” Koerner said. “If they don’t, that really doesn’t bother us. We’re gonna go out on Saturday and play the same way. If people want to talk, they can say whatever they’d like.”

A Big Ten West team hasn’t won the Big Ten since divisions were realigned heading into the 2014 season. The Hawkeyes came closest with a three-point loss to the Spartans in 2015. Ferentz recalls that, after the No. 4 Hawkeyes’ loss to the No. 5 Spartans six years ago, his team was praised more than it had been for most of its 12-0 regular season.

In July, Ferentz wasn’t sure if this would be the team to get back to the Big Ten’s biggest game.

“I know all of us want to know the answers right now,” Ferentz said at Media Days. “None of us do. I don’t know how good we’ll be this year, but I can say I really like our football team.”

Turns out, Ferentz’s fondness for his team was warranted. But, entering the season, Iowa’s goal wasn’t just to get back to the Big Ten Championship Game. It was to win it this time. Now, only the heavily favored Wolverines stand in the way of accomplishing that.

Iowa didn’t play in a bowl game last season because Missouri, its opponent in the Music City Bowl, withdrew from the game as a result of positive COVID-19 cases in its program. The last two times the Hawkeyes have been in the postseason, though, Petras recalls the Hawkeyes being doubted.

Against Mississippi State in the Outback Bowl to conclude the 2018 season, the Bulldogs were favored by a touchdown. In the 2019 Holiday Bowl, a graphic that showed every member of FOX’s pregame show picking USC over Iowa went viral.

“I know I like being the underdog,” Petras said. “It’s kind of fun. The first experience I had with that was the bowl game my freshman year against Mississippi State, where they had three first-round picks on defense and everyone thought they were gonna roll right over us. Then we went out there and beat them. USC in 2019, there’s that graphic of whatever pregame show that had everyone in the world picking USC because we’re just a bunch of slow guys from the Midwest. And we go out there and play great football and win the game convincingly. That’s the stuff that fires me up.”

The matchup between the Hawkeyes and the Wolverines kicks off at 7:17 p.m. on Saturday. The game will air on FOX. Most of the non-Iowa fans viewing the game may not give the Hawkeyes a chance at winning. Not that that’s new.

And not that the Hawkeyes care. 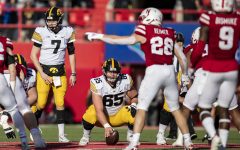 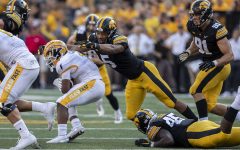 Big Ten Championship scouting notebook | No. 13 Iowa vs. No. 2 Michigan 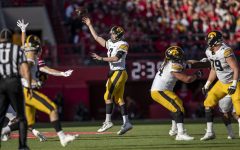