One stop they all made was at the Des Moines Register Political Soapbox to pitch their plans to Iowans (and the national media) at the State Fair.

The Daily Iowan covered all 22 Democratic hopefuls and the sole Republican in Iowa vying for the nomination throughout the last two weeks. Click each photo below to see a summary and tweets from the Soapbox.

In other coverage, the DI talked to longtime fair volunteers about what advice they’d give to candidates traversing the fair.

Most candidates visited the State Fair less than a week after the shootings in El Paso and Dayton in early August, and gun control policy was a frequent topic on the minds of both fair goers and presidential hopefuls.

In Iowa’s largest agriculture expo of the year, most presidential hopefuls kept their agriculture policy positions brief during their Soapbox speeches. When broached, candidates focused on trade and climate change.

Twenty-two Democrats competing for the party’s presidential nomination visited the State Fair (former Gov. John Hickenlooper pulled his presidential bid Aug. 15 after his stop by the State Fair). Although there are so many Democrats to keep track of, fair-goers The Daily Iowan interviewed said they weren’t yet fatigued by the caucus fanfare.

And, of course, DI photojournalists followed the presidential hopefuls as they ate fried fair food, caught glimpses of Iowa politicians, interviewed a few cute animals, and video journalist Ryan Adams even toured the best of the State Fair food and interviewed fair-goers along the way. 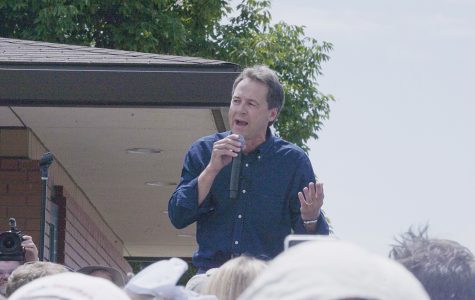 At the State Fair on Aug. 8, Montana Gov. Steve Bullock revolved his pitch around his ability to build relationships with Republicans while maintaining a “progressive agenda.” The first speaker at the Des Moines Register Political Soapbox, Bullock touched on his experience winning three statewide elections in Montana, which went to President Trump by 20 points in 2016. He could win California and Ve... 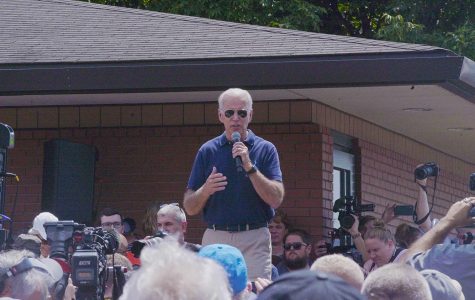 Former Vice President Joe Biden, wearing aviator sunglasses, told a crowd at the Iowa State Fair on Aug. 8 he would repeal the 2017 tax cuts President Trump championed in order to give more money toward building on the Affordable Care Act and reduce the cost of higher education. “We should be rewarding work, not just wealth,” Biden said. The crowd to see Biden spilled out on the sidewalk,... 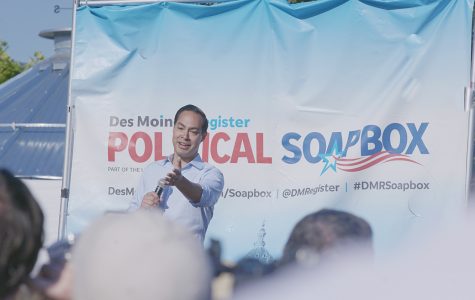 The second day of the fair kicked off with a promise of sunshine and a hot day, long lines to fair parking, and another presidential candidate — former Housing and Urban Development Secretary Julián Castro. Addressing climate change has been a constant of Castro’s campaign and stump speech. He said he would reduce the U.S. carbon emissions to net-zero by investing federal dollars in wind, water,... 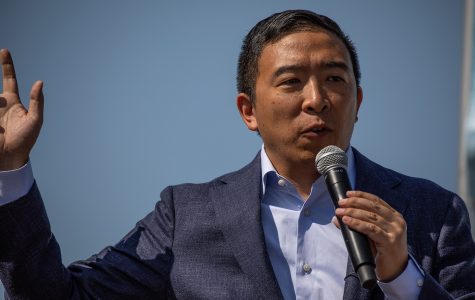 Entrepreneur Andrew Yang took the Des Moines Register Political Soapbox stage like a businessman making a pitch to his shareholders — with a lot of audience call-and-response participation. He asked questions and told participants to raise their hands, for example, "if you're a parent," and several in the audience were able to answer questions about his campaign, such as what his slogan MATH stands... 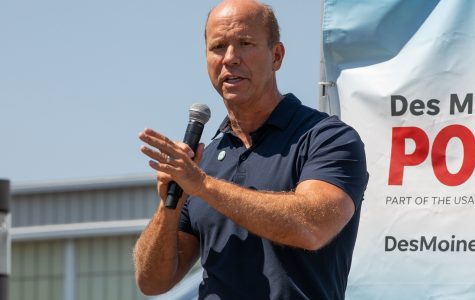 Former Maryland Rep. John Delaney spoke in the midday heat at the Des Moines Register Political Soapbox on Aug. 9, saying he would be the candidate to unite rural and urban America and beat President Trump in November 2020. It was Delaney’s second speech at the Iowa State Fair, having spoken during the 2018 Iowa State Fair. (Delaney began campaigning in 2017 and has traveled to all 99 counties in the... 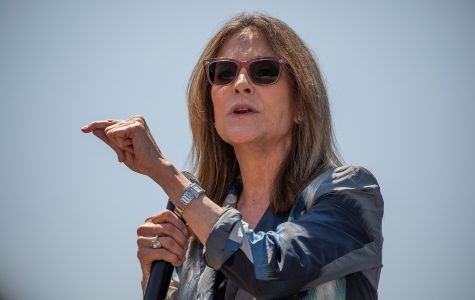 Marianne Williamson, an author and a motivational speaker, said America needs to focus on the causes, not the symptoms, of problems in the country. Drawing a similar size crowd as the presidential hopefuls who spoke before her on Aug. 9 at the Des Moines Register political soapbox, Williamson warned against the “political establishment” throughout her speech, saying it endangered America’s “goo... 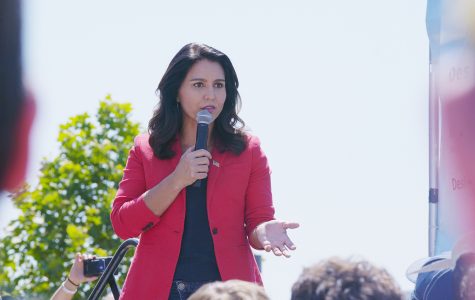 “Aloha.” That’s how Rep. Tulsi Gabbard, D-Hawaii, began her speech at the Des Moines Register Political Soapbox on the afternoon of Aug. 9. She focused her speech on her experience in the National Guard, outlining what her vision would be as commander-in-chief of the largest military in the world. The crowd, which was the largest of the day, gave a round of applause when she said she en... 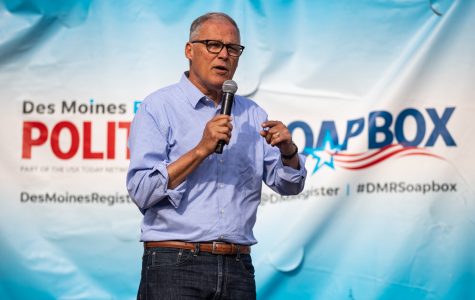 The governor of Washington and one of the Democrats running for president took to the Des Moines Register Political Soapbox on the morning of Aug. 10. He’s focused on climate change as his central issue, calling for drastic action to reduce carbon emissions, and his speech revolved around that issue. He kicked off his speech asking for Iowans’ support for him to get on the next Democratic debate s... 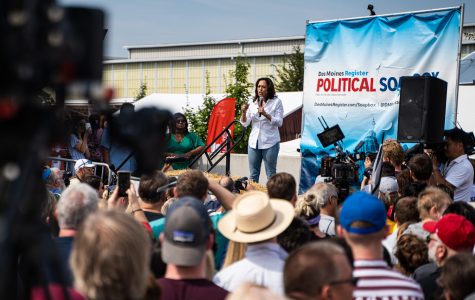 Democratic presidential candidate Sen. Kamala Harris delivered a speech on the State Fair’s Des Moines Register Political Soapbox to an overflow crowd in which she condemned President Trump on numerous fronts — similar to other stops she has made in Iowa. Harris opened her speech outlining “issues that keep us up at night,” which included health care, affordable education, and the securi... 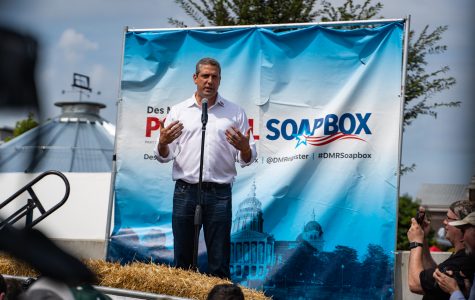 “It’s a pleasure to speed-date with you today,” said Ohio Rep. Tim Ryan, the third Democratic candidate to speak on the State Fair’s Des Moines Register Political Soapbox on Aug. 10. Right off the bat, Ryan outlined a long list of issues he would address as president: breaking up large concentrations of wealth, moving to a public-option health-care system, improving water quality, moving... 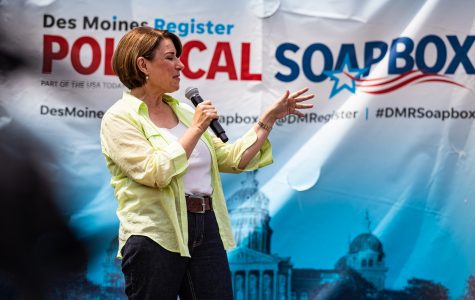 Minnesota Sen. Amy Klobuchar, a candidate for the Democratic nomination for president, emphasized her Midwestern roots at the Des Moines Register political soapbox Saturday afternoon. Referencing Iowa- and Minnesota-based policies, historical figures, and state fair oddities often throughout her speech. She said the reason she was running for office was to unite rural and urban America, political... 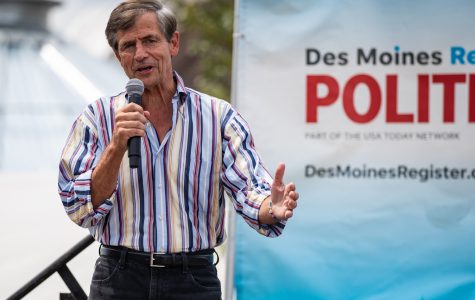 Former Pennsylvania Rep. Joe Sestak opened his speech by calling himself a "Pennsylvania boy." Sestak, who announced his candidacy June 23, highlighted his experience in foreign policy in a speech to the smallest crowd of the day at the Des Moines Register political soapbox. Most of his speech revolved around his career in the military, and his call for the world to come together on foreign ... 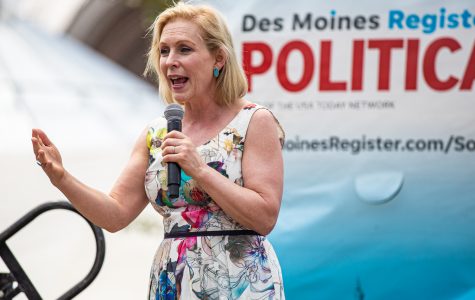 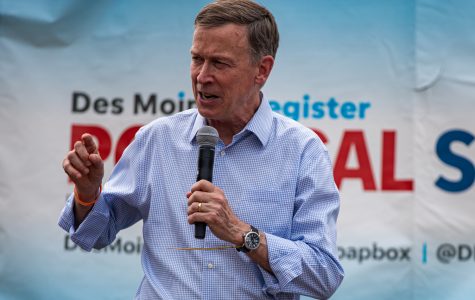 John Hickenlooper touted his background as a former governor, saying no sitting senator since 1900 has ever defeated an incumbent president – it's always been governors or former governors. Hickenlooper, a geologist who was laid off in the 2009 recession, became the mayor of Denver in 2003 to later be elected governor. It had been 120 years since a Denver mayor was elected to be the governor of C... 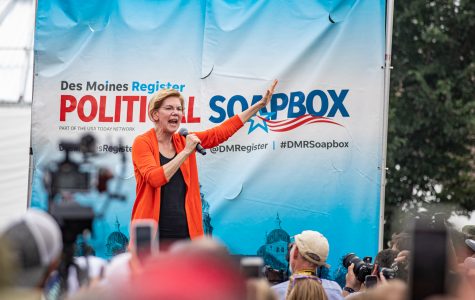 Sen. Elizabeth Warren, D-Mass., gave her usual rebuke to corruption and monopolies while speaking at the Des Moines Register political soapbox Saturday. She attracted the largest crowd yet for Saturday, the busiest day of candidate visits for the Iowa State Fair, and twice the crowd broke into chants. Once when she called for "big, structural change," the crowd started chanting with her, to which... 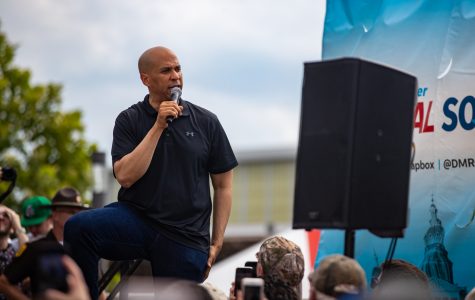 New Jersey Sen. Cory Booker took the stage at the Iowa State Fair Saturday afternoon to another big crowd after Sen. Elizabeth Warren, D-Mass, emphasizing unifying the country. He opened his speech at the Des Moines Register political soapbox talking about his family in Iowa. He said he recently eulogized his great aunt Alma from Iowa, who attended some of his previous Iowa events, often wearing ... 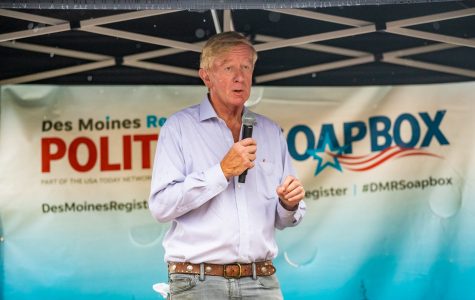 Former Massachusetts Governor and 2020 presidential candidate Bill Weld said he's the kind of Republican that wants to keep the government out of your pocketbook and out of your bedroom. But, he said, that line didn't fair well at the Republican National Convention in Houston in 1992. Weld is the only Republican to declare a candidacy so far. He also ran for president in 1996 and was involved in... 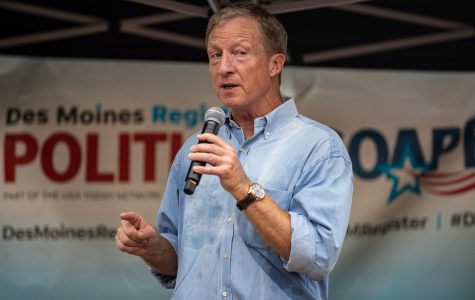 Businessman and Democratic philanthropist Tom Steyer called for corporations to release their "stranglehold" on America in his Sunday speech at the Des Moines Register Political Soapbox. "Corporations have bought the Democracy," Steyer said to a smattering of applause. He started off talking about his family's background. His father ended up prosecuting Nazis after World War 2 and has an aunt ... 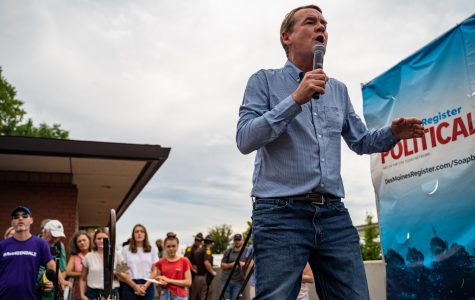 Sen. Michael Bennet, D-Colo., opened his speech on the Des Moines Register Political Soapbox talking about his background as the superintendent of the Denver public-schools system, saying the Trump administration isn't serving the kids he worked for in Colorado. "This isn’t just about who's in the White House, it’s about all of us taking control of democracy again," Bennet said. Bennet spent half of his time answering crowd questions, but listed three things he sai... 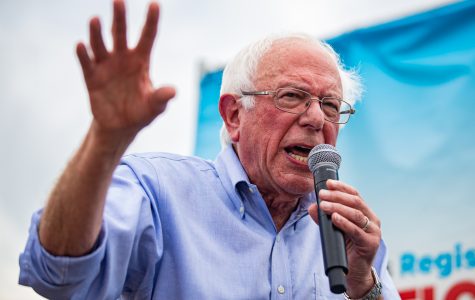 Sen. Bernie Sanders, I-Vt., drew one of the largest crowds at the Des Moines Register Political Soapbox of the weekend, rivaling the audience of Sen. Elizabeth Warren, D-Mass. Sanders referenced his previous trips to Iowa in 2016, and reemphasized many of his similar policy points on the Soapbox stage, calling on Iowa for help to win the Iowa caucuses and the Democratic nomination. "I need you... 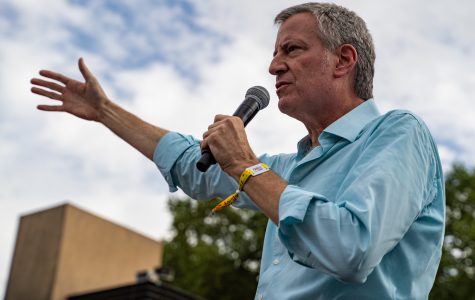 New York City Mayor Bill de Blasio called for reform within the Democratic Party throughout his speech Aug. 11 at the Des Moines Register Political Soapbox. De Blasio followed 45 minutes after Sen. Vermont, I-Vt., to a much reduced crowd. De Blasio painted himself as a progressive candidate ready to embrace policies such as tuition-free four-year college and universal childcare. He said the Demo... 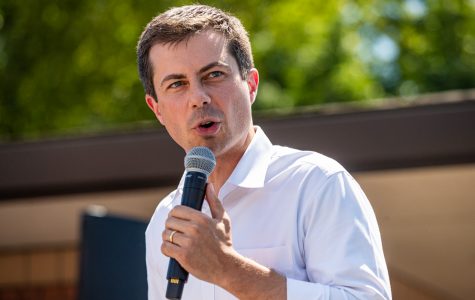 DES MOINES — South Bend, Indiana Mayor Pete Buttigieg on Tuesday told an Iowa State Fair crowd that America has problems larger than the man currently occupying the Oval Office. “I’m here to argue this president wouldn’t be here if we didn’t have even bigger problems that motivated a lot of our friends — especially here in the Midwest — to go in and vote to burn the house down,”... 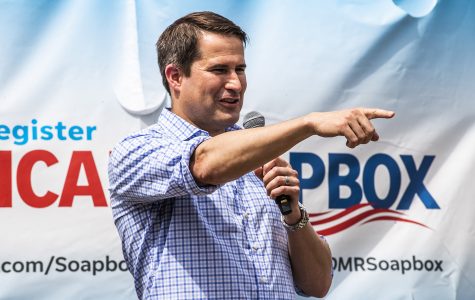 DES MOINES — Rep. Seth Moulton, D-Mass., spoke to Iowa State Fairgoers with a story about a recent speech he gave at a factory in his district, where a woman asked, "Who are you?" Moulton, the last of more than 20 Democratic presidential-nomination candidate to take the Iowa State Fair's Des Moines Register Political Soapbox stage, said that experience taught him to introduce himself before d...