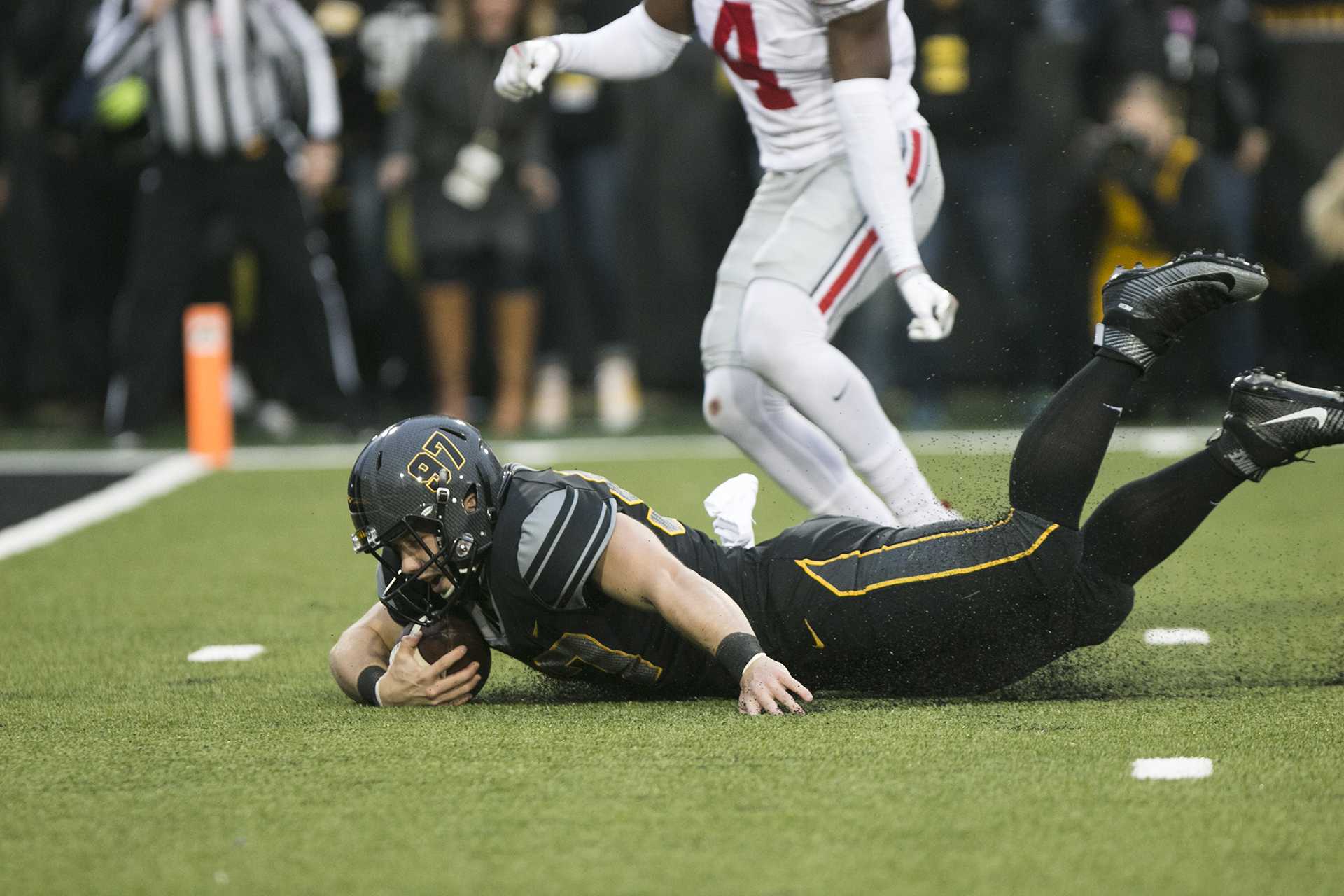 Iowa long snapper Tyler Kluver makes a reception off of a trick play on fourth down during the Iowa/Ohio State football game in Kinnick Stadium on Saturday, Nov. 4, 2017. (Joseph Cress)

Iowa long snapper Tyler Kluver makes a reception off of a trick play on fourth down during the Iowa/Ohio State football game in Kinnick Stadium on Saturday, Nov. 4, 2017.

Tyler Kluver, Drake Kulick, and Kevin Ward have taken their experiences from the playing field to the podcast arena.

Tyler Kluver was a long snapper who had a separate persona for Iowa fans as a special-team folk hero after a clutch trick-play reception set up a Hawkeye touchdown against Ohio State last season, becoming the “polecat.”

Drake Kulick was a hard-nosed fullback who wasn’t afraid to give opposing linebackers a big pop — or of a broken leg.

Kevin Ward was a safety-turned-linebacker who excelled on special teams to become a team captain, having his name announced by head coach Kirk Ferentz every week.

And they were all walk-ons.

Now, just one year after graduation and suiting up for the last time in the Pinstripe Bowl, the trio are known as podcasters.

The group has found a niche in the Iowa football world after graduation as the hosts of the podcast “Washed Up Walkons.”

But “Washed Up Walkons” is not your father’s talk show about the Hawkeyes. After listening to just part of one episode, it’s clear that the hosts have no problem ragging on each other while also working together with a few choice words here and there.

“‘Washed Up Walkons’ podcast is essentially, in a common sense, more of just three buddies hanging out, talking about what they used to do,” Kluver said. “It’s a rough breakdown of current Iowa football with past stories. I like to call it Barstool-esque. It’s like an Iowa version of Barstool … We like to keep it fun and entertaining. We mostly want to just differentiate and not do what other people always do.”

I like to call it Barstool-esque. It’s like an Iowa version of Barstool … We like to keep it fun and entertaining. We mostly want to just differentiate and not do what other people always do.”

The idea for the podcast started as something of a joke. It spawned in a group chat with Kluver, Kulick, Ward, Josey Jewell, Bo Bower, and Ike Boettger after the group lived together.

After a funny conversation one day, Kluver said, someone suggested their conversation should be recorded. A few days later, Ward texted Kluver and Kulick, saying he would be willing to start a podcast with them.

Listen to the most recent episode of “Washed Up Walkons” below.

The walk-on bond the three share makes them a perfect choice to host a podcast, because they had to work their way up from the bottom of the totem pole, giving them plenty of stories along the way.

“If anything, it provides each of us the knowledge and understanding that we’ve all gone through the same thing,” Kluver said. “It was all kind of the same path to where we got as seniors … 100 percent it gives us a very backed-up point of view on how things work from a walk-on standpoint.”

The process of making the podcast has been relatively simple to this point. 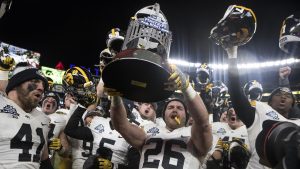 Ben Allan Smith
Iowa’s Kevin Ward (26) holds up the New Era Pinstripe Bowl trophy after the Hawkeyes beat Boston College in the Pinstripe Bowl at Yankee Stadium in New York on Wednesday, Dec. 27. The Hawkeyes went on to win 27-20.

Kluver started off by buying Kulick and Ward two USB microphones. Then, the three connect on Zencastr, a program that essentially allows the group to record a three-way call.

Then Kluver takes the three separate audio files and puts them into Audacity, an audio editing program. He proceeds to put the podcast on Anchor, which is what they used to start the show.

Kluver estimates it takes two hours of work — one hour to record and one to edit and upload the real version of the conversation.

When all the work is completed, the podcast becomes available on iTunes, Spotify, Anchor, and other places in which podcasts are found.

Despite its simplicity, “Washed Up Walkons” has gained a legitimate fan base of Hawkeye followers.

Kluver said he thought only a couple hundred people would listen when they first put the podcast up. But the first episode ended up getting around 1,200 listens in a week, the second racked up 1,800, and the third got 5,000. Now, there is a steady audience of about 5,000 to 6,000 people, Kluver said.

Whether it’s discussing favorite Halloween candy or costumes, talking about what they did on and off the field during their days as Hawkeyes, or impersonating Ferentz, the podcast resonates with its listeners.

“I think it [resonates] because of how closed off the Iowa football program is; when you’re in the program, the players who are currently playing now keep everything close to the vest,” Kulick said. “What happens inside the doors of Iowa football stays inside the doors. When players like Tyler, Kevin, and I are able to graduate and then come back and shine a positive light from the players’ perspective, I think it’s something the fans can’t get anywhere else, so it’s just something that they kind of crave — to know the truth on what goes on in there.”

The trio are only seven episodes in, but it hasn’t taken long for former and current players to become dedicated fans. 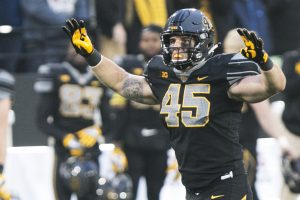 “I was with them for four years before they graduated — Tyler, Kevin, and Drake,” said defensive tackle Sam Brincks, who also found his way into trick-play lore with an over-the-shoulder touchdown catch from punter/kick holder Colten Rastetter. “Just knowing who they are, they’re themselves on the podcast, so I think that makes it pretty fun.”

The success of the podcast has generated some advertising for the show in terms of merchandise.

The trio currently sell shirts with popular catch phrases from the show, including the “Let’s Have a Day” line Kluver says to start each podcast and “Hawks By a Million” made famous by Kulick in his betting section of the podcast.

Kulick serves as the perfect person to have made the motto famous. He’s making his living playing poker, and although he doesn’t want to do it full-time in the future, it’s working out as self-employment in the present.

His current profession — along with the podcast being Barstool-esque — is a fairly good reason to have Kulick give advice on betting.

“I saw Drake had a betting thing — so funny,” kicker Miguel Recinos said. “Because I remember — I think it was the Rose Bowl — he went out I think like every night, and I think he actually won a decent amount of money. It was just funny to hear, because it’s like he’s trying to take it to the next level.”

Kulick’s bit brings something other than football to the forefront of the podcast. 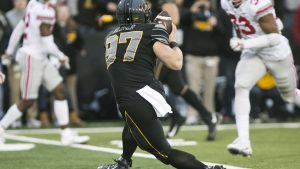 Joseph Cress
Iowa long snapper Tyler Kluver makes a reception off of a trick play on fourth down during the Iowa/Ohio State football game in Kinnick Stadium on Saturday, Nov. 4, 2017.

“It started the first week when we found out the line was whatever it was in the game,” Kulick said. “Basically, Kevin and I said, ‘You have to take the Hawks here. This is just easy money.’ From then on, every week, we just discuss the line and where we think if your bet should be placed. It was just kind of another organic deal that just happened.”

So now, one question remains: What’s next for the podcast?

In short, they don’t know. They said they want to do it every week for the foreseeable future at least until the end of the offseason.

The trio don’t have any plans to up it to numerous podcasts a week or expanding it to a live stream or YouTube channel yet.

With it being a local podcast, it may not grow to the point where all three hosts could get paid. But if that was a possibility, Kluver said he thinks all three of them would do it.

Until that point, if it comes, the “Washed Up Walkons” will keep doing what they do best: entertaining fans off the field with their past stories on it.

“It’s really cool for people to kind of hear our stories,” Kluver said. “For us, it’s just our life so it doesn’t seem that interesting. But for other people, they really enjoy getting a look in through the window of what Hawkeye football is like and some of the things we got to experience.

“It makes us feel super important even though we’re not playing anymore to give people that kind of insight.” 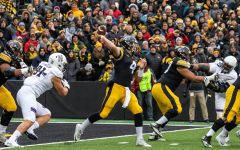 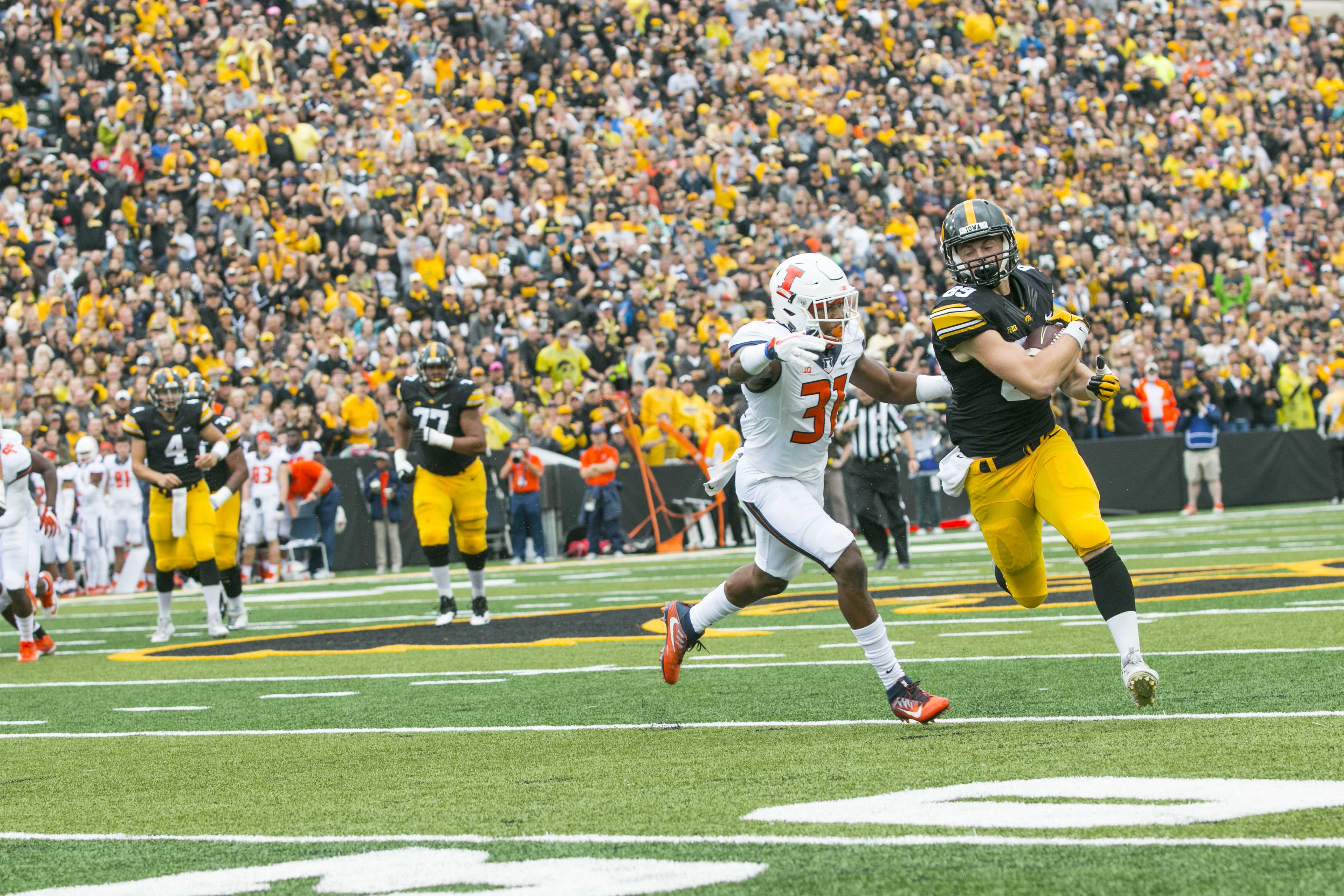 By the numbers: Illinois 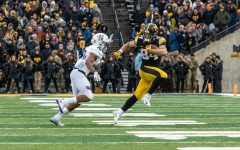 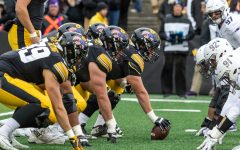