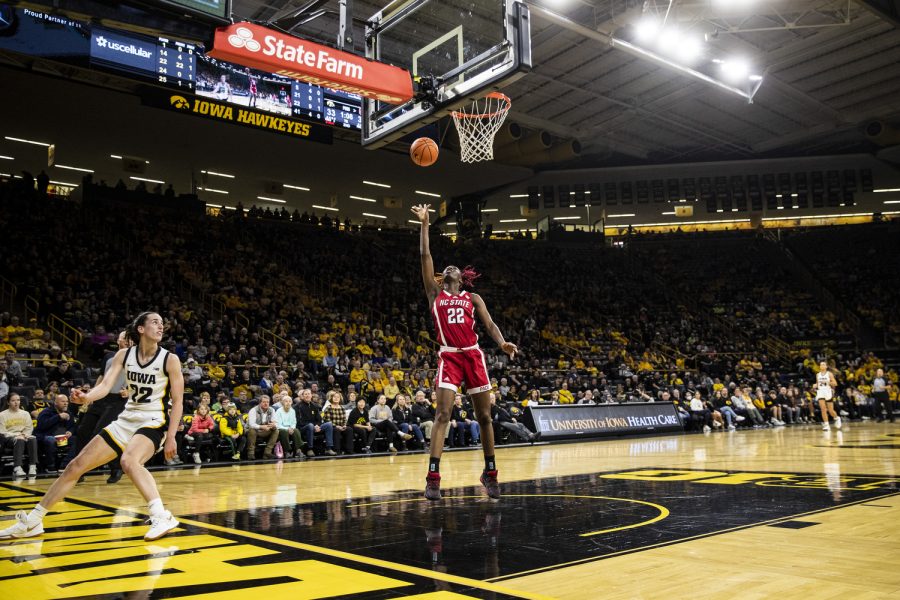 NC State guard Saniya Rivers goes up for a shot during a women’s basketball game between No. 10 Iowa and No. 12 NC State at Carver-Hawkeye Arena in Iowa City on Thursday, Dec. 1, 2022. Rivers shot 9-of-11 in field goals. Both Rivers and guard Diamond Johnson scored 22 points for NC State. The Wolfpack defeated the Hawkeyes, 94-81.

Senior center Monika Czinano did not record a point in the first half against NC State on Thursday night and took just one shot.

Czinano finished the game with only five points on 2-of-4 shooting from the field.

“That was a focus in practice,” NC State guard Diamond Johnson said of guarding Czinano. “We knew how good she was, how efficient she was, and if she was going to take a shot there’s a good chance that it’s going in.”

Czinano has been struggling to get shots off in recent games, as she recorded just seven points on eight shots against UConn on Nov. 27.

“This was a totally different defense than what UConn did to us,” Bluder said. “I don’t know why we couldn’t get her the ball tonight, honestly. I mean, they were on her back. Why can’t we pass the ball to the post when the post defense is on her back? It’s maddening.”