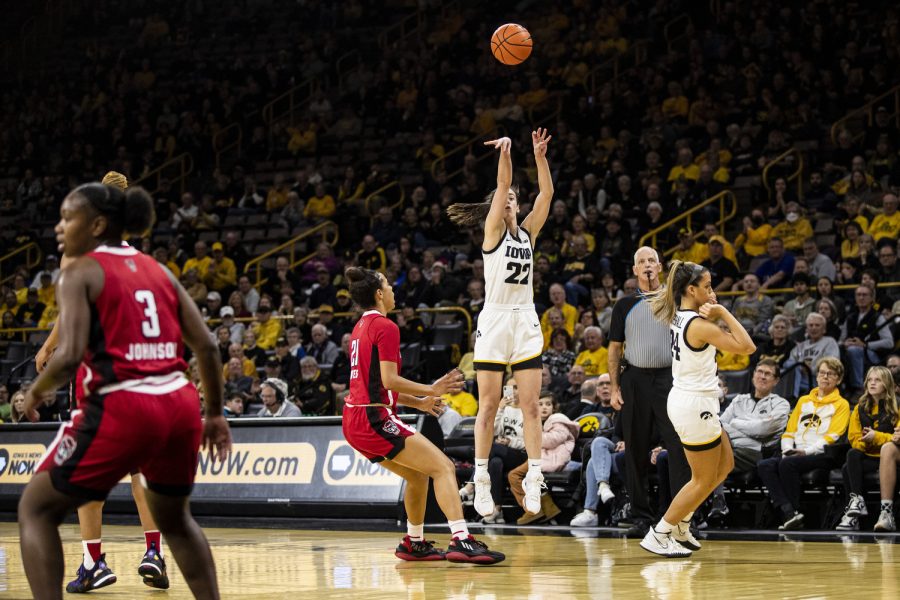 Iowa guard Caitlin Clark shoots a 3-pointer during a women’s basketball game between No. 10 Iowa and No. 12 NC State at Carver-Hawkeye Arena in Iowa City on Thursday, Dec. 1, 2022. Clark shot 5-of-13 in 3-pointers. The Wolfpack defeated the Hawkeyes, 94-81.

The Hawkeyes started the season ranked No. 4 in the country, but they have not yet recorded a ranked victory.

Iowa lost to No. 3 UConn, 86-79, on Nov. 27 at the Phil Knight Legacy Tournament. The Hawkeyes’ loss against the Wolfpack moved them to 5-3 overall and 0-2 against ranked opponents.

“We have a choice,” head coach Lisa Bluder said. “We want to get better. Are we going to put in the effort or are we just going to stay an average team? Or maybe above average, I’ll give us that.”

The Hawkeyes’ next game against a ranked opponent will be the Cy-Hawk series on Dec. 7. Iowa will take on No. 8 Iowa State at Carver-Hawkeye Arena.