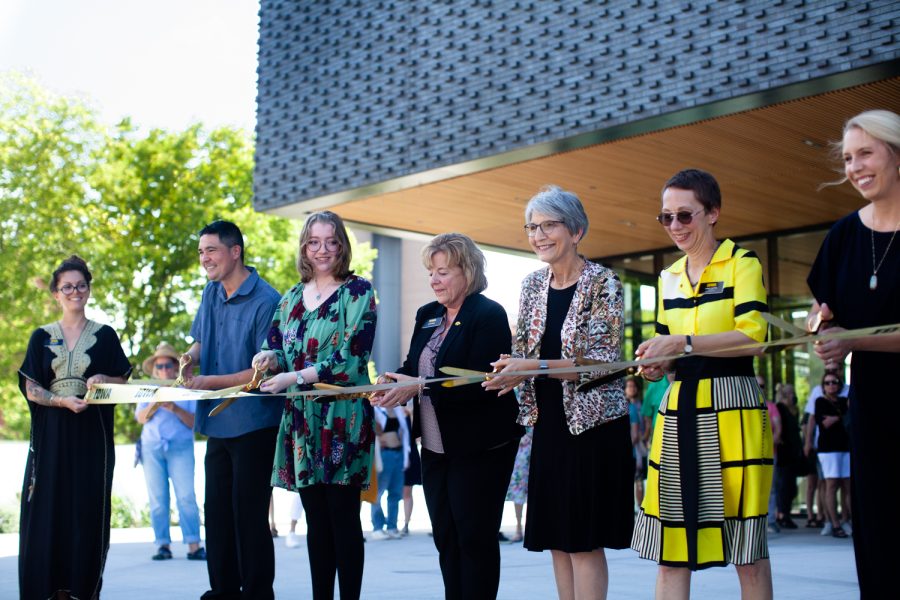 The ninth director of the Stanley Museum grew up surrounded by art. Lessing was raised in southern Indiana, just across the river from Louisville, Kentucky. Her mother was a painter and a high school art teacher. Her father was a sculptor and the art director for Bruce Fox: a small company that created decorative, cast-metal artworks for Wilton and other brands.

“I grew up watching my parents make things,” Lessing said. “They had studied at the University of Louisville, right after the Second World War.”

It was there that her parents studied painting from an internationally recognized artist, Ulfert Wilke.

Wilke later left the University of Louisville and came to the UI. With Wilke, the UI opened the UI Museum of Art, now known as the Stanley Museum of Art. He was the first director of the museum and held the position that Lessing now holds.

Lessing was present for the museum’s opening as a baby, further connecting her to its history. Her parents kept in touch with Wilke through letters during his lifetime, and she remembers him as a family friend.

Lessing’s childhood experiences helped her transition to over a 25-year-long career in art history and education. Her credentials include working for museums such as the Art Institute of Chicago and the Nelson-Atkins Museum of Art in Kansas City, Missouri.

Before her arrival at the UI, Lessing worked at the Colby College Museum of Art as the Mirken Director of Academic and Public Programs in Waterville, Maine. While there, she learned of the flood that swept through Iowa City in 2008.

The waters damaged the original Stanley Museum, though the artwork was salvaged due to the efforts of employees and over 200 volunteers. Thousands of pieces of art were evacuated before they were dispersed to the IMU, the Figge Museum in Davenport, and other collections around the country.

Through her family connections, Lessing had an already established love for the UI.

“That was what made the flood so devastating for me when I saw everything happening from Maine,” Lessing said.

Ten years later, Lessing would become the ninth director of the Stanley Museum of Art, assuming the same position Wilke occupied in her childhood. Under her guidance, she doubled her staff and oversaw the opening of the $50 million dollar new facility on Burlington St.

“We had reconfigured ourselves to be a museum without walls,” Lessing said. “We were not used to thinking about the mission of the museum and the way we would need to pivot and think about it once we were in a building.”

Two months after the museum opening, Lessing has shifted her focus toward securing permanent lines of funding for three of her staff members. Currently, those positions are supported using funds raised for the museum by the UI Center for Advancement.

“I didn’t even take a breath,” Lessing said. “I pivoted right from the building campaign to raising money for operations.”

Lessing said while the 17,000-item collection of the museum is extensive, its staff is the smallest of the Big Ten. Additionally, while other Big Ten Museums, like Northwestern’s Block Art Museum, have an endowment of nearly $18 million, Stanley Art Museum has an endowment of around $5 million.

Lessing’s biggest goal over the next ten years is to triple the size of that endowment and double her staff to support the Stanley’s sizable collection. With that increase, staff funding will expand, as will support for teaching, learning, and research.

“We’re a young art museum,” Lessing said. “We’ve only been around since 1969. And it takes time to build up endowment funds so we can begin to build our capacity to do some of the things that we know we want to do.”