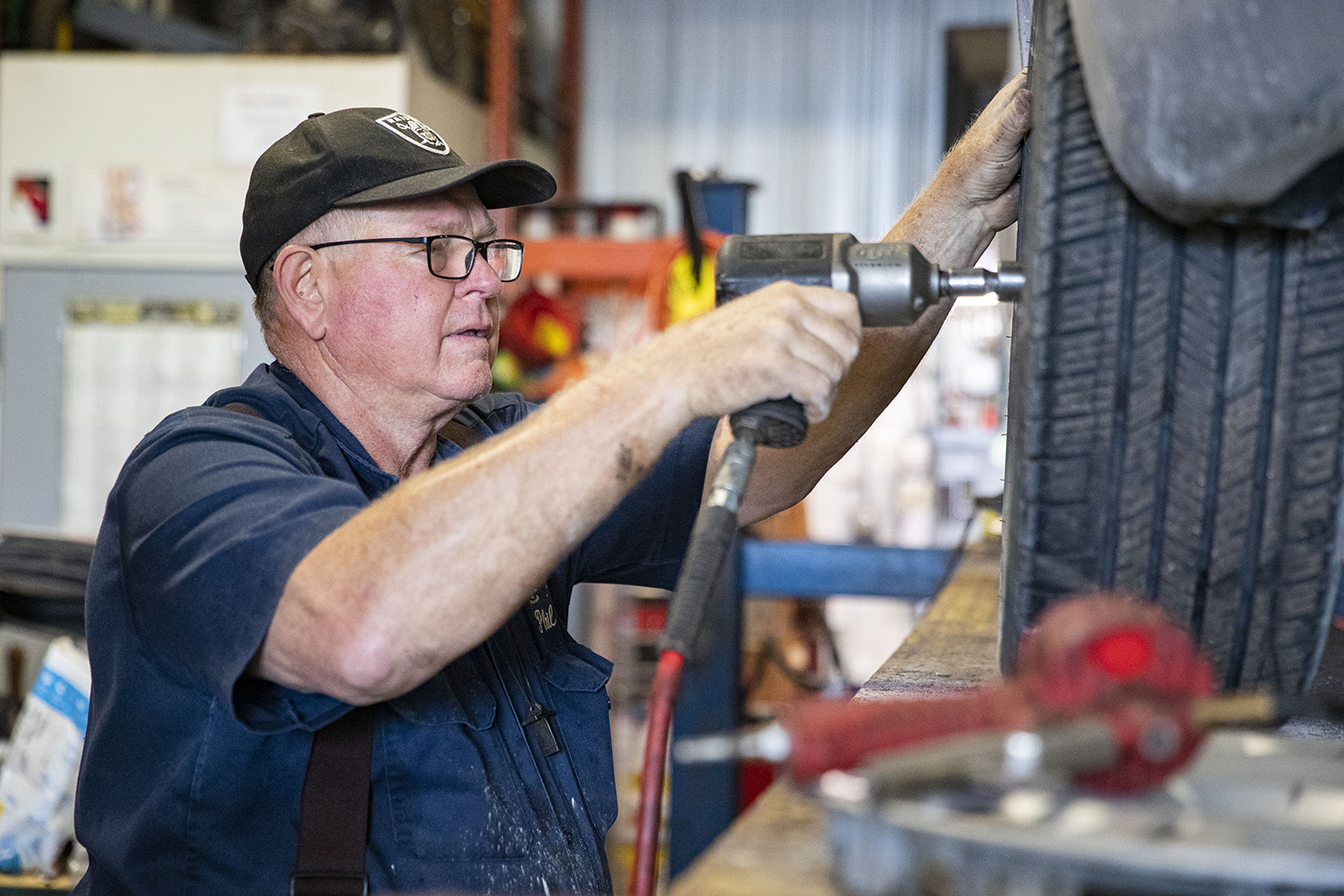 Phil Hemingway works on a car in his repair shop on Sunday, Sept. 18, 2022. Phil’s Repair was founded in 1997 and has been in multiple locations throughout the Iowa City area. Regardless of if Hemingway wins a seat on the Board of Supervisors he said, “I will be working with my hands till the day I die.” (Ayrton Breckenridge)

Phil Hemingway works on a car in his repair shop on Sunday, Sept. 18, 2022. Phil’s Repair was founded in 1997 and has been in multiple locations throughout the Iowa City area. Regardless of if Hemingway wins a seat on the Board of Supervisors he said, “I will be working with my hands till the day I die.”

Hemingway, who is running for a spot on the Johnson County Board of Supervisors for the fifth time, opens up about his personal life and stance on politics.

In a small shop on the edge of Iowa City lies an auto garage where the walls are decorated with family pictures and the ground is coated in shoe-prints revealed by gravel dust.

The door is stickered with red and blue text that reads “Phil’s Repair LLC.”

At the helm of the garage stands Phil Hemingway, a career mechanic born and raised in Johnson County. He carries a funnel and quart of oil in hand.

Phil has worked in and around a garage since 1997.

Today, the 62-year-old lifelong Johnson County resident hopes to take the wisdom he’s gained working and living in the community to set him apart as a candidate for the Johnson County Board of Supervisors in the Nov. 8 elections.

David Hemingway, Phil’s older brother, points out that Phil has a remarkable talent for connecting with others.

He recalls a moment as kids, when they lived on a farm outside of Morse and Oasis, when he was working on farm equipment with Phil. At the time, David remembers 12-year-old Phil turning to him and saying, “David, you lack structural visualization.”

Phil’s knowledge of farm equipment revealed to David not only Phil’s knowledge of mechanics but his innate ability to speak to people. Phil recognizes this is an advantage and said he’s been a strong communicator throughout his life. He pointed to his four years on the Iowa City School District school board from 2015 to 2019.

He said that transition into public office allowed community members to come and speak their minds with him, which is an activity he enjoys and something he did himself for six years. 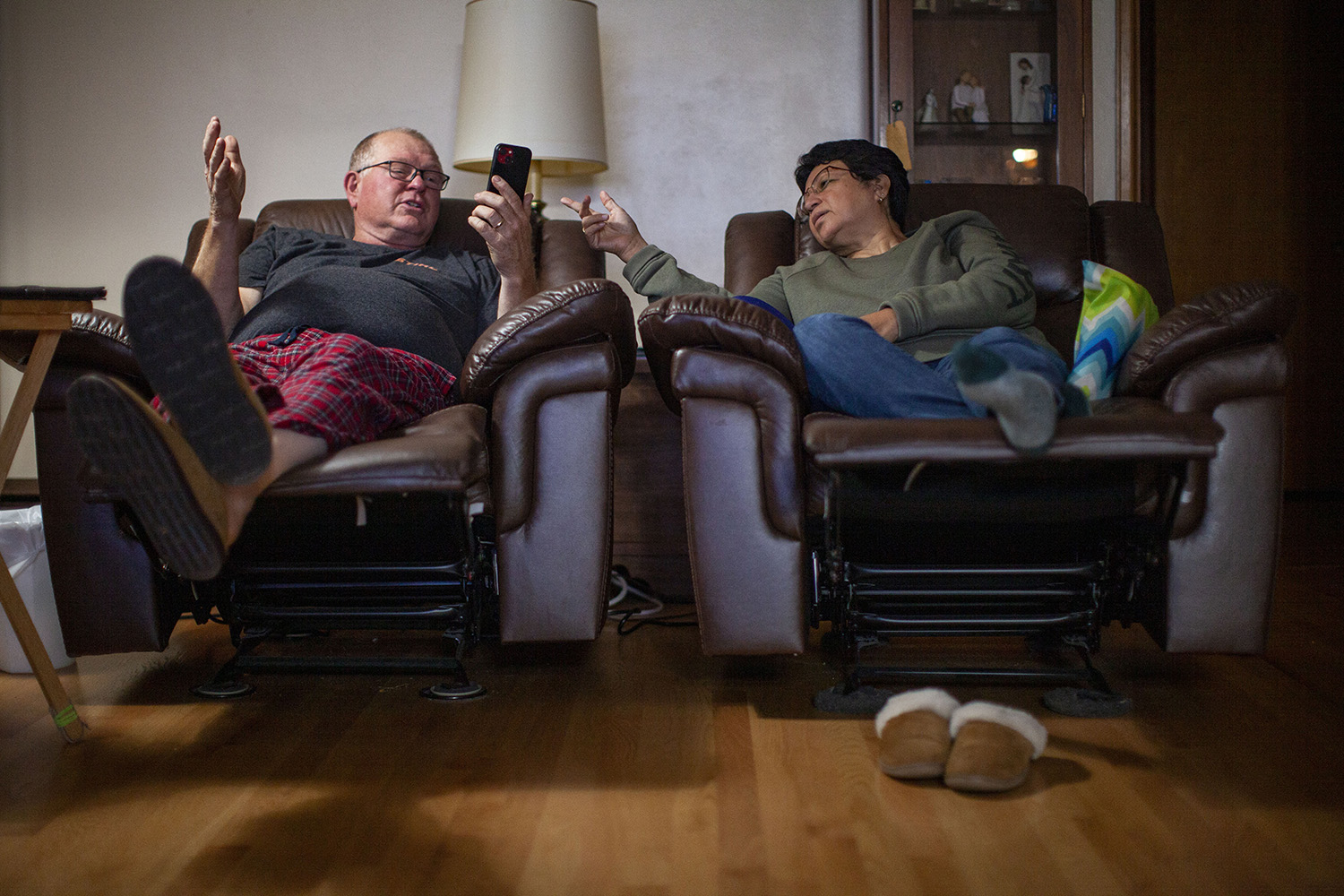 Phil looks at a phone with his wife, Anita Hemingway, after a day of working. Most nights in the fall, the couple finds football games to watch together.

Belize was not the only foreign country Phil called home.

From 1990 to 1994, he lived in several African countries and within the former Soviet Union. At one point he served as an agricultural consultant; at another, he was a grain vacuum technician on several humanitarian foreign aid ships.

The ships consisted of American workers, but Phil said the stevedores originated from multiple countries and all worked together toward a common goal to unload the cargo in a timely manner.

While he enjoyed working with people from backgrounds different from his own, he chose to move back stateside to spend more time with his wife and daughter.

David wrote in a statement to The Daily Iowan that Phil’s experience abroad gave him a larger perspective and more experience to his bid for public office.

“His experience working with and getting along with vastly diverse colleagues make him particularly qualified for public service,” David wrote. 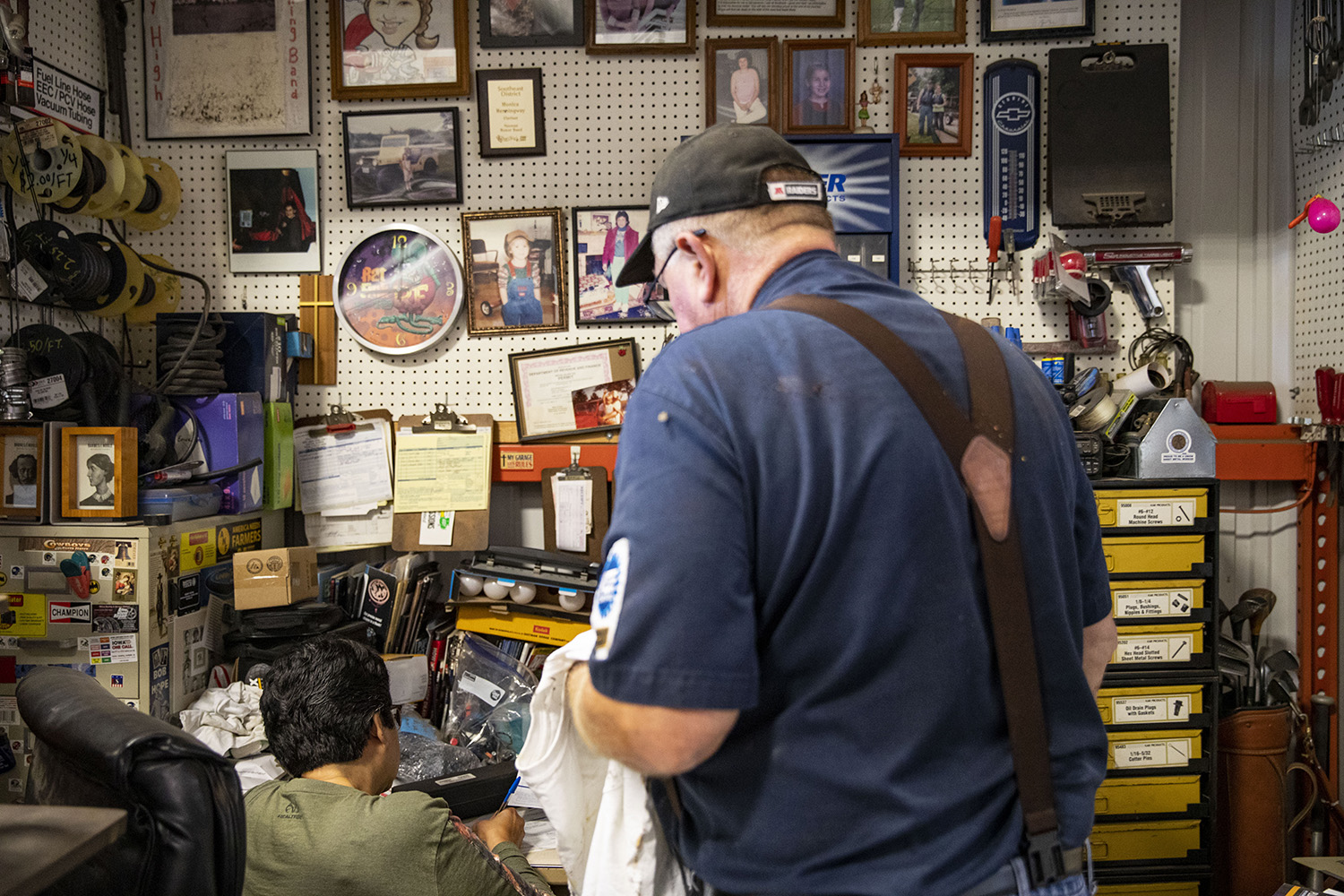 Phil Hemingway works with his wife, Anita, to go over the books for Phil’s Repair. Anita also works as a nurse at University of Iowa Hospitals and Clinics and helps Phil in her free time. “I just, want to see him succeed in what he wants and it’s just part of being a couple,” Anita said.

In the ‘80s, Phil jumped on the opportunity to manage Roy Carver Sr.’s cattle ranch in Belize when he was in his 20s. Carver’s son, Roy Carver Jr., hired him for the oversight position in 1984.

It was there that he met his future wife Anita Hemingway, and the couple recently celebrated their 30th anniversary. Soon after getting married, the couple moved back to Iowa and had their daughter Monica Homann in 1994.

Anita is another staple at Phil’s Repair. When she isn’t working as a nurse case manager for the surgery specialty unit at the University of Iowa’s Hospital and Clinics, Anita keeps Phil’s books up to date, gathers fresh oil, and picks up parts. She has stood with Phil for three school board campaigns and five supervisor campaigns.

“I can see the passion in wanting to make a difference in the community, and that’s what keeps him going,” Anita said.

Anita sees Phil’s passion for politics and his natural ability to talk to people as an advantage compared to other competitors.

“There are always people who will want to talk to you, and if you do not make time for them, you’re nothing,” Anita said while chopping onions with a knife for a dish called curtido, which she brings to book club.

The prospect of running his own business allowed Phil to help raise Monica and let her work in the shop. Eventually, Monica became his campaign manager when Phil ran for school board.

Monica even designed the campaign sign he still uses to this day. Early in his political career, his campaign budget was low, so he would take old political signs and paint over them to make them his own. Phil raised $790 in 2022 for the reporting period spanning Jan. 1 through July 14, according to a report from the Iowa Ethics and Campaign Disclosure Board.

During his campaign, Phil makes it a point to show the pay raises county supervisors received from 2018 to 2023. A sign mentioning those dollar figures is prominently displayed wherever Phil campaigns.

Phil’s initial promise back in 2018 during his first bid for a supervisor position was to not seek or accept a raise during his term. He still stands by that promise. With the $20,000 raise in pay between 2018 and 2023, Phil plans to take that money every year and donate it to every school in Johnson County that has an agriculture or Future Farmers of America (FFA) program in place.

“Agriculture is the one thing that every single person in the world is involved with every day,” Phil said.

During his time on the school board, Phil said he supported bringing those programs into the school system because they offer young people access to different trades and open the door to new job opportunities.

Phil was also chairman of the board’s finance committee and ties his work there to the current salary increases with the board of supervisors.

“The budget for the Iowa City school district is larger than the county’s budget,” he said. “[The school district] also has more employees than the county has employees. I oversaw the largest bond issue at the time in the state of over $193 million-plus of spending to renovate our schools … and I did all of that for free,” Phil said.

He was one of two board members at the time to vote against sending the bond to the full referendum and said there wasn’t enough in it for special education, career and technical education — and it left Hills Elementary out. Though the referendum passed, Phil saw it as his responsibility as a leader in political office to oversee the bond.

“Sometimes you’re on the winning side of it, and sometimes you’re not, but you still have to go on and make sure everything you do is for the betterment of the community,” Phil said. “You can’t hold grudges and things like that, you just have to go on and continue to work … I’m running to be a voice for everyone in the community — and I mean everyone. Not just of one party, not just of one community, but the entire county.”

He likened his political approach regarding finances to the way he manages Phil’s Repair. It wasn’t until his third time running for school board that he thought it would go his way, he said. With his persistence and current politics, Phil believes the seat could fall his way as more people pay attention to where their money is going given high inflation and a looming recession.

Looking at his eight campaigns, Phil and Anita are familiar with the struggles that come with achieving success, but they see their Republican Party affiliation as an extra barrier in a largely Democratic county. Among the county’s 90,213 active voters, 46,645 are registered Democrats, and 16,571 are registered Republicans. The rest are mostly registered as no-party voters.

“A lot of people in this town and in this county only look at the consonant behind the name and immediately get turned off,” Anita said. “Some of them lump all Republicans in the same category not realizing that there’s different shades of Republicans.”

Phil ran uncontested in the June Republican primary with Jammie Bradshaw. They will face off against Democratic candidates Jon Green and V Fixmer-Oraiz on Election Day.

Phil and Anita both mentioned the benefit of having people from different backgrounds represented on the board.

“When you have five people of one political thinking making decisions for a community that is very diverse in their thinking,” Phil said. “I would think the community would recognize the benefit from having a diverse group of leaders.”

Phil’s older brother David is a self-proclaimed “liberal Democrat.” Even though he doesn’t always politically align with his brother, David said they end up supporting the same goals.

Phil said he plans to treat a supervisor’s seat as a full-time job, referencing the amount of pay received, while some still consider the role a part-time endeavor.