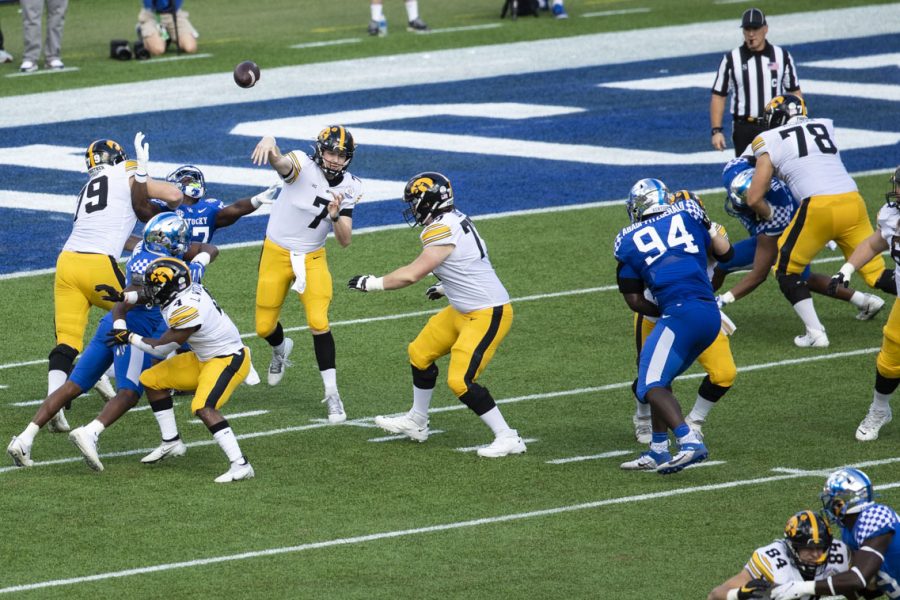 Iowa quarterback Spencer Petras releases a pass during the 2022 Vrbo Citrus Bowl between No. 15 Iowa and No. 22 Kentucky at Camping World Stadium in Orlando, Fla., on Saturday, Jan. 1, 2022. Petras threw for 211 yards. The Wildcats defeated the Hawkeyes, 20-17.

Point/Counterpoint | What will Iowa football’s record be in 2022?

DI staffers Grant Hall and Jake Olson debate what the Hawkeyes' regular season will look like. Hall argues for a 10-2 mark while Olson opts for 8-4.

The Hawkeye football team has all the tools to follow up last year’s 10-win season with another successful season despite losing some key players.

The Tylers (Linderbaum and Goodson) are gone, preparing for their rookie year in the NFL, as are Matt Hankins, Zach VanValkenburg, Jack Koerner, and Dane Belton. Receiver Tyrone Tracy and return specialist Charlie Jones both transferred to Purdue.

However, the Hawkeyes return a huge number of significant contributors. Fifteen starters are back for another year in Iowa City.

Much like last season, Iowa’s success will be determined by quarterback play. Incumbent Spencer Petras was average at best last season, passing for 1,880 yards with 10 touchdowns and nine interceptions.

The good news for Hawkeye fans is that Petras has shown promise during offseason workouts at the Manning Passing Academy, and he’ll have many of his favorite targets back this season in Keagan Johnson, Nico Ragaini, Arland Bruce IV, and tight end Sam LaPorta. If Petras improves upon last season’s showing, Iowa could have a run at the conference title once again.

Despite the handful of departures previously listed, Iowa still boasts arguably the best defense in the conference.

The defensive line rotation is stacked with a plethora of options. The linebacker corps boasts three starters on the Butkus Award watch list, and the defensive backfield returns six players who earned significant minutes a year ago.

Iowa’s schedule is no cakewalk. The Hawkeyes will likely lose to Ohio State in the Horseshoe on Oct. 22, and could very well drop a game to Michigan at home on Oct. 1.

Rivalry games against Wisconsin and Purdue (though not an official rivalry it should become one) could realistically end in losses as well. I think Petras will improve enough to lead the Hawkeyes to a win over the Boilermakers.

I think Iowa will finish 10-2 in the regular season with losses to Ohio State and Wisconsin.

Wins over Michigan, Purdue, Nebraska, and Minnesota, will lead to a berth in the Big Ten title game. The Hawkeyes will be overmatched by Ohio State and still reach a solid bowl game.

Iowa has expectations for another solid season as 15 of 22 starters are returning to Iowa City.

On defense, Iowa returns a bulk of their big playmakers that helped the Hawkeyes force 31 turnovers — second best in the country — a season ago. Logan Lee, Noah Shannon, and Lukas Van Ness all return to anchor the defensive line. Linebacker Jack Campbell comes back for his senior season after leading the nation with 143 total tackles.

The offense is going to be the biggest question mark in 2022. Iowa had the second-worst scoring offense in the Big Ten a season ago averaging 23.4 points per game. To put that in perspective, Ohio State averaged 45.7 points per game.

With that in mind, I believe Iowa will finish the regular season 8-4 and earn a bowl game appearance.

After a season-opening win against South Dakota State, Iowa will beat Iowa State — which will have a new man under center after Brock Purdy’s graduation.

In their next two games — versus Nevada and Rutgers — the Hawkeyes will get two more victories before Michigan comes to town on Oct. 1.

The Wolverines’ high-octane offense will be too much for Iowa to handle. The Hawkeyes will drop to 4-1.

Iowa will defeat Illinois for the ninth straight time then head to Columbus for a showdown with the perennial College Football Playoff-contending Ohio State Buckeyes.

Ohio State — behind a potent offense led by C.J. Stroud and a raucous home crowd — will hand the Hawkeyes their second loss of the season.

Iowa will drop a second straight game at home against Northwestern the following week. The Wildcats have beaten Iowa three of the last four times the two teams have squared off in Kinnick and Pat Fitzgerald’s team is almost never bad two years in a row. Last year, the Wildcats won just three games.

Iowa’s tough stretch will continue in West Lafayette against Purdue. The Hawkeyes have struggled recently against the Boilermakers and that trend will continue. Iowa hasn’t won at Ross-Ade Stadium since 2016 and Purdue quarterback Aidan O’Connell and tight end Payne Durham will make sure Iowa has to wait another two years for a chance at a road victory against the Boilermakers.

Sitting at 5-4, the Hawkeyes will close out the regular season with three straight wins over Wisconsin, Minnesota, and Nebraska.