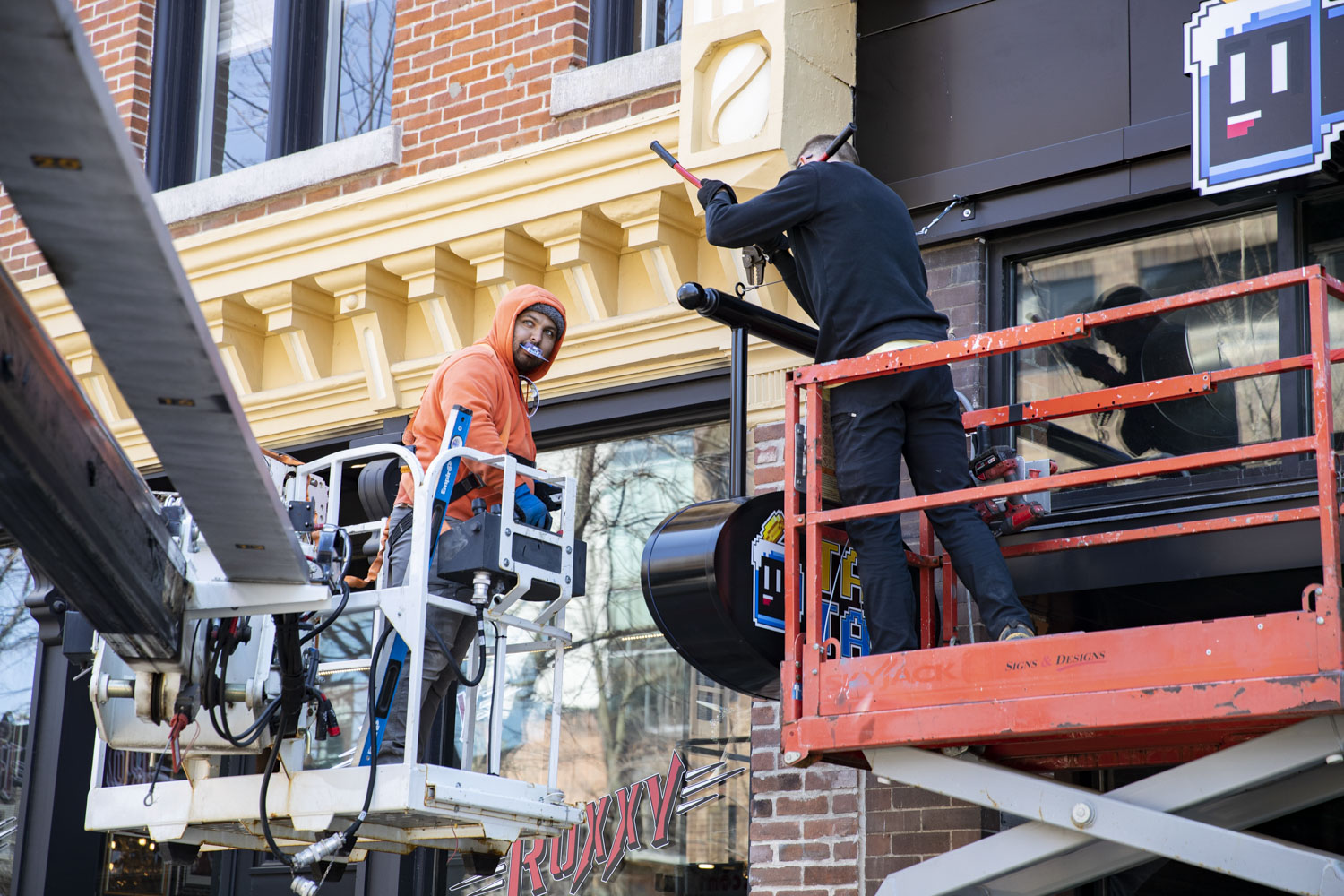 Signs and Designs installers Tanner Lamphier (left) and Clint Wrage (right) work on installing a sign for Tap Tap in the Ped Mall on Tuesday, April 26, 2022.

Past, Present, Future: Businesses and structures coming to the Pedestrian Mall soon

The Iowa City Pedestrian Mall will welcome a new playground, bars, restaurants, and art pieces as the academic year ends and summer begins.

This is the third and final part of a project series on the Pedestrian Mall. The first part appeared in The Daily Iowan on March 20 and the second part appeared on April 12.

A new tapas and martini restaurant, a bar that doubles as an arcade, and a multicolored playground are just some of the planned additions to the Iowa City Pedestrian Mall in the coming months.

In fall 2022, the playground that currently stands outside of the Iowa City Public Library will be replaced with a $227,000 project by Woodruff Construction.

Juli Seydell Johnson, Iowa City director of parks and recreation, said playgrounds typically last about 20 years. The current playground was installed in 2001, so it’s normal for it to be near its end, she said.

“The playground is very quickly nearing the end of its life,” Johnson said. “We’ve been unable to actually get several of its replacement parts. Many people haven’t noticed but there are pieces of it that are missing right now, and we have concerns about structural integrity.”

Johnson said she thinks the playground will be popular with the public because it will be constructed in the current location, just south of the library and surrounded by multiple restaurants.

The plans for the playground have been in the works for over a year. National companies GameTime Playground Equipment and Cunningham Recreation, and the public provided input on the playground’s design, as the city put out an online public survey for input on the structure.

The city sifted through a whopping 550 responses and settled on a number of general themes for improvement, Johnson said.

“Not every individual request was incorporated, but some of the things that were heard loud and clear were people wanted more shade,” Johnson said. “The general consensus of original colors chosen wasn’t very favorable, so we switched colors to the blue and green that is going to be there.”

Johnson added that there were multiple requests for accessibility for parents to get into the structure easily.

“There was a sense from parents that they wanted to be able to get to the top levels of the slide towers, like if we have a small child who climbs up there, you need to be able to get up quickly to rescue them if they need help,” Johnson said. “It’s definitely accessible in terms of people with disabilities, who use mobility devices.”

The playground parts are scheduled to arrive in mid-July and Johnson estimates that the playground will be fully constructed by late August or early September.

Double Tap, a bar arcade with over 50 games, is set to open on June 1 in the building Union Bar once occupied.

Double Tap’s neighbor, Roxxy, is owned by the same company, Paramount Barco, which is from Cedar Falls.

Darin Beck, CEO and president of Paramount Barco, said the group looked at all three locations including the basement and ground floor of the former Union bar in April 2021 and negotiated them simultaneously because they loved the locations so much.

“I’ve just been looking for places to do these types of arcades,” Beck said. “We have multiple brands, but the three brands that we're bringing into Iowa City are the same three that happened to be kind of bundled together in Cedar Falls. It's worked out really well, so we went that route.”

The Ped Mall is among the best places in the state to bring his three businesses, Beck said. He added that he was really excited by the redevelopment that occurred on College Block and in the locations he was interested in.

With food, drinks, and games from multiple decades like skee ball and pinball, Beck hopes Double Tap will have something for everyone.

“We'll certainly have great pizza there and a full bar, but Double Tap is also the kind of place you can go and if you're not hungry, that's fine,” Beck said. “And if you don't feel like drinking you don’t have to do that either, and you still have something to do.”

Double Tap will be 21 and up, but on weekends, they plan to have family days on Sundays where parents and children can come and play arcade games.

“There's also an elevator that people can take by going in the Riverside Theatre entrance,” Beck said. “There's an elevator and a new corridor there that accesses the basement, as well.”

The Stuffed Olive’s Iowa City debut is set to open on May 19, sooner than its basement counterpart.

Beck said the bar is different from anything else in the Iowa City community.

“It's a martini bar, with over 100 martinis on the menu, and a very nice chef-driven tapas menu,” Beck said. “Food-wise, there are probably similar things in Iowa City, but from the ambiance and the Martini menu, there's just nothing like it.”

The Stuffed Olive will also serve pedestrians who are 21 and older.

Both bars are located at 121 E. College Street, which Union Bar occupied until its closing in 2020. Beck said he’s excited for people to come to Stuffed Olive and Double Tap and see how it’s changed since they took over the space.

“It's definitely a changing of the eras,” Beck said. “People who remember the Union are going to be, I think, pleasantly surprised at how radically different it is. They won’t even recognize it at all.”

“I think being downtown, especially when you have the football season and literally hundreds of thousands of people walking through downtown from other states, then that's one way to get your brand out there,” Kass said.

The space will have three levels and a patio that seats 90 people, Kass said. The brewery is set to open on Sept. 1.

“We'll have a basement floor that is going to be kind of edgy,” Kass said. “There'll be a bar in the basement. And then a room off of that room where it's more lounge-type seating. The main floor will be more akin to the ReUnion in Coralville as far as the music played and everything and that will have roughly seating for 125.”

The top floor of ReUnion will also feature live music Thursday through Saturday, and during the week — before 10 p.m. if the dining room downstairs is busy — the upstairs area will serve as a spillway location.

Kass said the management is trying to diversify their menu to get people of all ages to ReUnion, not just students who are out at night.

Later at night, the brewery will be geared more toward students, offering dancing and music. The basement, however, could have any age group in it, Kass said.

Kass said she feels it is important to have businesses like ReUnion in the Ped Mall because it helps connect the Iowa City community and keep businesses the same instead of constantly changing what occupies a building.

“I think it's good to have something like ReUnion that has been around for a while and has longevity, so you don't kind of have a revolving door downtown,” Kass said. “I think that's a healthy thing.”

Living in the Ped Mall

Two weeks before ReUnion opens its doors for the first time, downtown Iowa City’s newest apartment complex will place its first residents in the heart of the Ped Mall.

The Nest, a 182-bedroom, 11-story apartment complex, will start moving its very first tenants in on Aug. 19 after over a year of construction.

Kory Theil, regional manager of Tailwind Group, wrote in an email to The Daily Iowan that the idea of the Nest came about several years ago and has been a work in progress for some time.

“The process of acquiring each address on College Street to make the development a possibility took multiple years prior to the construction phase,” he wrote. “We are excited for the new businesses and housing opportunities we are able to offer Iowa City through this project.”

Theil wrote the draw of the Nest is its prime location.

“Our future residents will have the opportunity to interact with the many new small businesses in the area,” he wrote. “... Additionally, our top floor units will also have access to their private rooftop patios with the best views of Iowa City.”

The Tailwind Group, which also developed the buildings that Roxxy, the Stuffed Olive, Double Tap, and ReUnion are in, chose the Ped Mall as the place for the Nest because it is an iconic and unique location that allows tenants access to both downtown Iowa City and the University of Iowa campus, Theil wrote.

The Ped Mall has always been a home for local art, and more is on the way.

The first new project to appear will be the painted benches around the playground outside of the Iowa City Public Library. The BenchMarks program allows artists to repaint the standing benches each year.

“We aim for a diversity of bold, eye-catching designs, that capture and contribute to the atmosphere and liveliness of the ped-mall, and designs that will hold interest for 365 days versus something of a one-liner,” the call for submission states.

Betsy Potter, director of creative services for the Iowa City downtown district, said the benches will be ready in the first week of June.

She added that the Ped Mall will also feature an international public art piece for a month.

In summer 2021, the city brought a piece called the “Loop” from art producers Creos into the Pedestrian Mall near the Black Hawk Mini Park. Potter said Creos will implement another, different art piece for a month this summer, in June, titled Mi Casa, Your Casa 2.0.

“That will be part of the Pedestrian Mall, our footprint for a good month this summer, just to bring activity and interaction to this space,” Potter said.

Pedestrians can keep an eye out for a new mural that will be painted on the side of Plaza Centre One’s north-facing wall this summer as well.

Potter said the Iowa City Downtown District is currently asking artists to submit their qualifications to be considered for the mural. Then, a shortlist of selected artists will be contacted to submit their designs.

According to the project’s request for qualifications, the wall to be painted is approximately 12 feet tall and 36 feet long and can be treated as one composition or three related panels divided by the existing brickwork’s pattern.

The artwork will be installed by Sept. 31.

Potter said she is particularly excited about the mural on Plaza Centre One, as it will be easy to spot from the Ped Mall.

“It's viewable from the Pedestrian Mall, but it's also in an alley space. It is right at eye level,” Potter said. “Some of our murals are up high, some of them are quite large, but this one is long and narrow, or long and short, a little bit, so it's a really great opportunity.”

To Potter, it is important to have spaces for public art like Plaza Centre One, not just in the Ped Mall, but throughout Iowa City.

“Public art is incredibly important to the authenticity of the community. It brings a lot of color and personality to the spaces where it's at. People really enjoy and like it when they find something like a mural along the alleyway there,” Potter said. “We understand that public art is very important to the community. Not just specifically the Ped Mall, but overall, to downtown.”