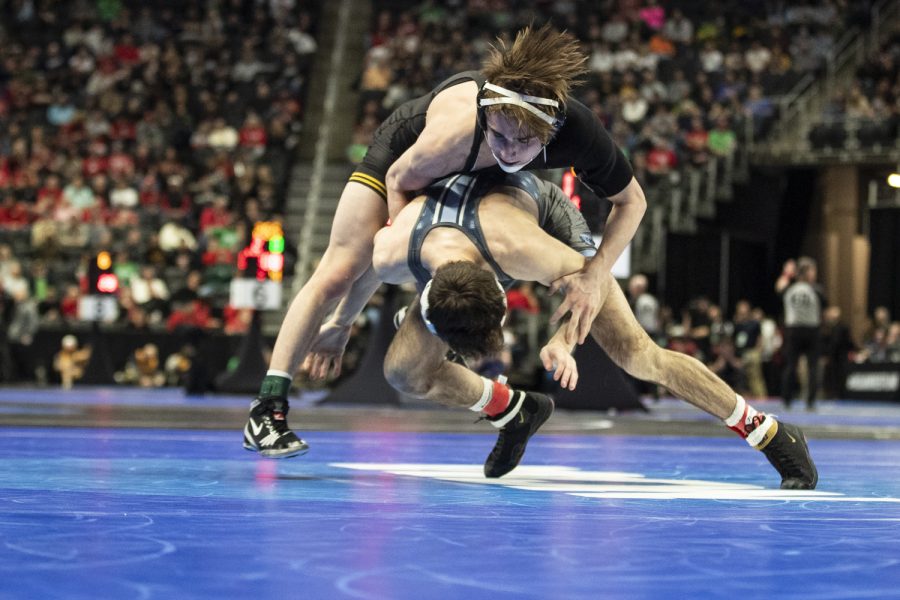 Iowa’s No. 13 Drake Ayala takes down Columbia’s No. 29 Joe Manchio during session two at the NCAA Wrestling Championships at Little Caesars Arena in Detroit, Mich., on Thursday, March 17, 2022. Ayala defeated Manchio in a 125-pound match, 7-1.

Daily Iowan Sports Editor Austin Hanson and Sports Reporter Chris Werner debate what the sophomore’s role will be in 2022-23.

I know I’ve said sophomore-to-be Drake Ayala will suit up for the Iowa men’s wrestling team in 2022-23. In a lineup preview, I listed Ayala as my choice to wrestle at 133 pounds for the Hawkeyes’ next season.

That was what I think Ayala will do. What Ayala should do and will do are two different things.

I believe it’d be best for Ayala to redshirt in 2022-23. First and foremost, Ayala needs to make sure his left shoulder is healthy. He missed three of the Hawkeyes’ duals last year with what some reports suggested was a torn shoulder labrum.

If Ayala wrestled through a torn shoulder labrum at the end of last year, he should prioritize his rehabilitation process and make sure he’s back to full strength before he ponders getting back on the mat next year. I don’t know the nature of Ayala’s injury beyond what’s been reported or what his timetable for recovery looks like. Regardless, Ayala needs to make sure his shoulder is ready to go if he wrestles next year.

Ayala also needs to consider if he wants to bump up to 133 pounds. The only way Ayala is a fixture in Iowa’s lineup next year is if he moves up a weight class. I just can’t see Spencer Lee — a four-time All-American, three-time national champion, and two-time Hodge Trophy winner — moving up to 133 pounds to make room for Ayala at 125.

Moving up a weight class and rehabbing an injury isn’t easy. To avoid both of those scenarios, Ayala should redshirt next season, wrestle unattached, if possible, and resume his Hawkeye career at 125 pounds in 2023-24.

Drake Ayala shouldn’t redshirt in 2022-23. Instead, Ayala should bump up from the 125-pound weight class to 133 during his sophomore season to make room for three-time 125-pound NCAA champion Spencer Lee.

Ayala filled in nicely at 125 pounds in 2021-22 while Lee was out with knee injuries. With Lee coming back for the 2022-23 season, Ayala will either have to bump up a weight class or sit out a season.

I think, to give his team the best chance to win, Hawkeye head coach Tom Brands needs to put both Lee and Ayala on the mat next year.

Lee will wrestle at 125 pounds and likely collect a fourth and final national title, and Ayala will grapple at 133 pounds.

I would rather see Ayala, a proven 125-pounder who compiled a record of 17-8 and earned an NCAA championship bid last season, move to 133 than Ybarra or Schriever.

Putting Lee and Ayala in the same lineup gives Iowa its best chance to win regular season duals and contend for both Big Ten and national titles next March.

This is the Hawkeyes’ last season with Lee, so why not pull out all the stops?