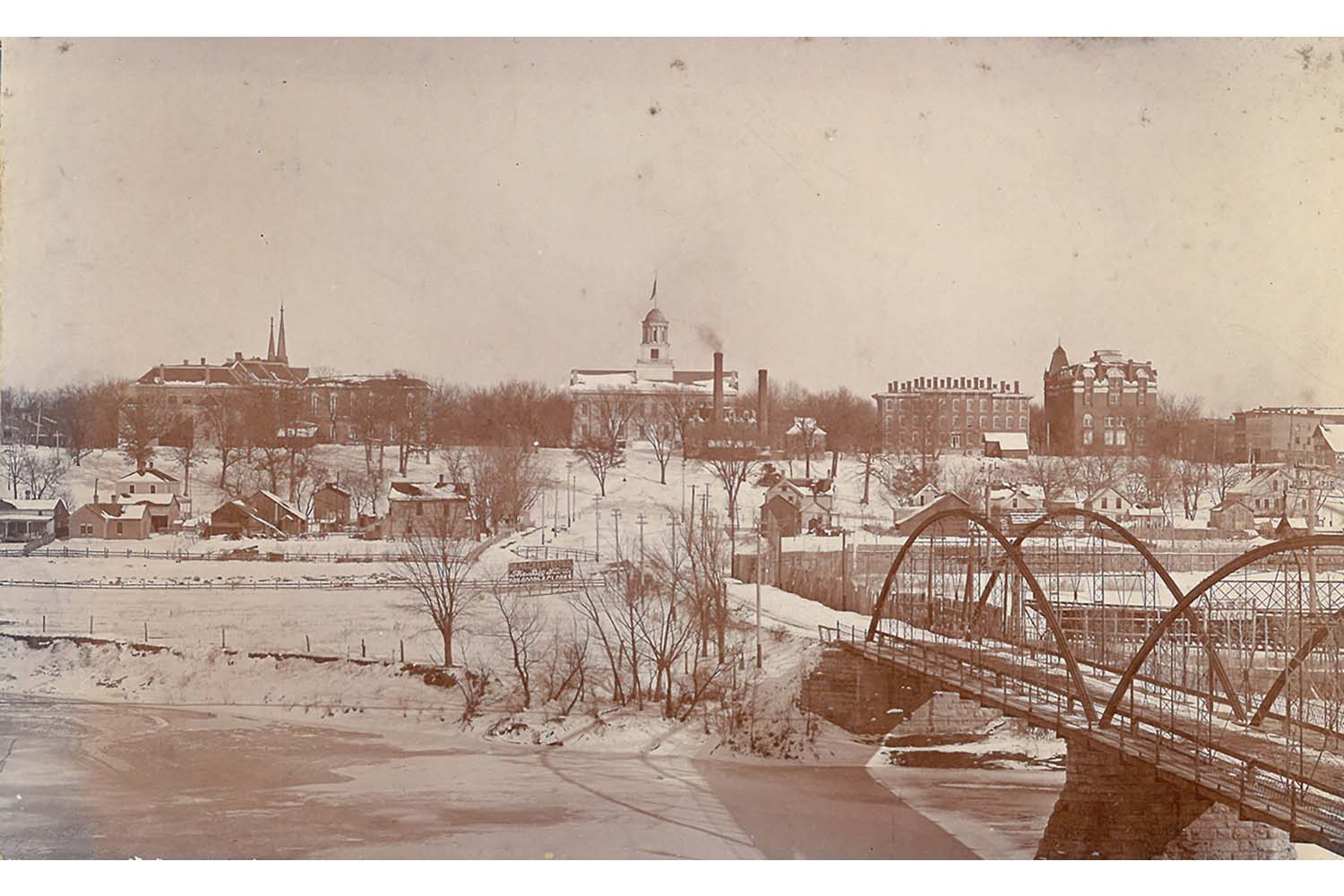 Contributed from the State Historical Society of Iowa, Iowa City.

Contributed from the State Historical Society of Iowa, Iowa City.

The University of Iowa hardly looks the way it did when classes started in 1847. Over nearly two centuries, the campus has evolved to better accomodate a larger student population.

Iowa City looks vastly different from what it was when the University of Iowa was first established in 1847.

The steps of the Old Capitol used to run into vast greenery. No buildings existed near the site after its construction in 1840.

Nine days after construction started, architect John F. Rague resigned, and Chauncey Swan, a territorial government commissioner, finished overseeing the job. The building started with only four rooms, as it housed the Iowa Legislature for a few years and the entire university until 1863.

From there, the UI expanded in physical infrastructure, student population, and educational courses.

The entire campus was housed in the Old Capitol for six years, while the university’s South Hall was occupied and several buildings were beginning construction to build campus — blending together Iowa City and the university campus on which we all now call the city home.

“It’s such a visible place in Iowa City,” said Aiden Bettine, UI community and student life archivist, of the Old Capitol. “You see a lot of the blur between campus and community, and the town and gown relationship, throughout time in that location.”

The heart of campus

Since the university’s founding, the Old Capitol, cut from Iowa River limestone, has been the center and heart of campus. The Pentacrest, however, looked very different when the inaugural Hawkeye class stepped onto campus.

Mary Bennett, special collections coordinator at the State Historical Society of Iowa and a former Hawkeye, said the “red brick campus” used to stand where the Pentacrest is now. The era featured tall buildings with chimneys instead of the four buildings that stand there today which were inspired by the Beaux-Arts Movement, she said.

“There were all red buildings, kind of like Calvin Hall,” she said. “It wasn’t until 1900 or 1901 that they started with Beaux-Arts, stone buildings that we know now. So, the look of the campus changed drastically after that.”

The Pentacrest space housed the Old Capitol, the Medical Building, South Hall, the Second Observatory Building, the Dental Building, North Hall, and Science Hall from 1865 until 1894.

The major buildings on campus were all located on the east side of the Iowa River in the UI’s early history, with the main campus sitting between Madison and Linn Streets.

The final Pentacrest building was built in 1924, when Jessup Hall was completed over a decade after MacLean Hall. The heart of the UI, however, was not done growing as higher education busied in Iowa with the creation of a competing public institution.

The establishment of another public Iowa institution

“The land grant provided land to the designee, so in our case the land was in northwest Iowa and the state sold that land to fund a [new] university,” she said. “… It started as an agricultural college and the land grant pushed to make that a reality.”

Because the land was designated and sold, students could begin at ISU without paying tuition, she said. Students were expected to do chores and work on campus in exchange for their education, she said. This took away from the UI’s applicant pool in the 1800s.

Sheridan said that because the UI did not have designated lands and funds from the federal government like ISU did, the university began focusing its scope and investing more in certain programs.

As higher education expanded in the state, the two campuses continued to look different. From the very start, faculty members and students lived on campus at ISU, Sheridan said.

The UI’s first residence hall didn’t open until Currier Hall was built in 1914, nearly 70 years after the institution’s first classes.

Bennett said the two schools had “different characters,” with the UI often taking on a more cosmopolitan and political role, especially after World War I.

“There was more student radicalism going on here [the UI],” she said. “… Iowa State was originally more vocational, and more geared towards engineering and home economics. The UI was more of a traditional liberal-arts college with a focus on the humanities. They were, and are, two distinctive campuses.”

A primary motivator behind her decision to attend the UI instead of ISU in the 1970s was that the former was more political and progressive at the time, Bennett said.

Regardless of the differences, Sheridan said the two universities found ways to succeed and grow together.

“There were overlaps — still are overlaps,” she said. “But we’ve got our lanes. And I think that was the perfect set up for success for all three universities we have now. Not many states can boast two big universities that are this successful, but no matter what you want to do, you can continue to find success within our state because of the focuses of the two.”

The growth of the physical university

As the UI expanded in the 1800s and early 1900s, the campus underwent many changes and huge renovations.

Although the university used a few buildings that were built before its doors opened to students, several buildings have been built and demolished to create the campus people see today.

The Dey House, which still stands by Currier Hall, was the first building built after the founding of the UI. It was commissioned in 1857.

South Hall was built in 1863, on the present-day grassy area between Schaeffer and MacLean halls. The building burned down in 1901.

Fifteen university buildings, including the Old Capitol, were built in the late 1800s. In addition to the Old Capitol, only two still stand: Old Brick Church and Calvin Hall — which was originally on the Pentacrest. Seashore Hall is the most recent 1800s building to be demolished. The building was destroyed in May 2021.

Between 1900 and 1983, 74 buildings were built. The expansion of the university eventually bled into downtown Iowa City.

“The Old Capitol Mall used to just be buildings and storefronts of local businesses,” Bennett said. “And now, the university just bought it [in 2022].”

The university didn’t expand into the western side of the Iowa River until the 1920s and 30s. Buildings continue to be built to accommodate growing areas of study and the larger number of university students.

An expansion of Hawkeyes

At the beginning of the university’s tenure, student enrollment varied.

By 1856, 124 undergraduate students were enrolled. At this point, there were only three types of degrees the university could give to students. Students could earn degrees from the Preparatory Department, the Normal Department — which would eventually become the College of Education — and the College of Liberal Arts.

Twenty-five years later, the UI welcomed 729 students, including 169 graduate students. At this point, the university added three more degree programs and eradicated two departments for undergraduates from the original three.

While it still offered a language-arts degree, undergraduates could also learn about law, medicine, and homeopathic medicine. Those degrees were also expanded to graduate students.

By the turn of the 20th century, the undergraduate population had multiplied twelve-fold. In September 1900, the UI welcomed 1,542 undergraduates to Iowa City, as well as 352 graduate students.

On the university’s 100th birthday, there were nine colleges with 15,634 people enrolled — 59 percent of whom were men.

As the world reached Y2K, 26,956 students were enrolled in undergraduate, graduate, and professional programs at the UI.

The university is currently made up of more than 28,000 students, as the COVID-19 pandemic continues.

That is 227 times the amount of people who originally walked into the Old Capitol for the first university classes in the state of Iowa.

Bennett said increased enrollment has changed how students interact with campus. When she received her bachelor’s degree in the 1970s, there were closer to 21,000 students at the UI.

As enrollment numbers continued to rise, so did the university’s expansion into downtown Iowa City, Bennett said. She added that North Liberty and Coralville also began to blossom as a result of the university’s increasing population.

“You could walk places when the campus was smaller,” she said. “Coralville was virtually nothing back in those days. There were things out on Highway 6 back then, but it wasn’t anything like the way it is now. I think Iowa City has lost some of its thunder in a way and has been superseded by Coralville and North Liberty.”

Regardless of how it’s changed over the 50 years since Bennett arrived, Iowa City is still one of the most beautiful places she’s been to, Bennett said.