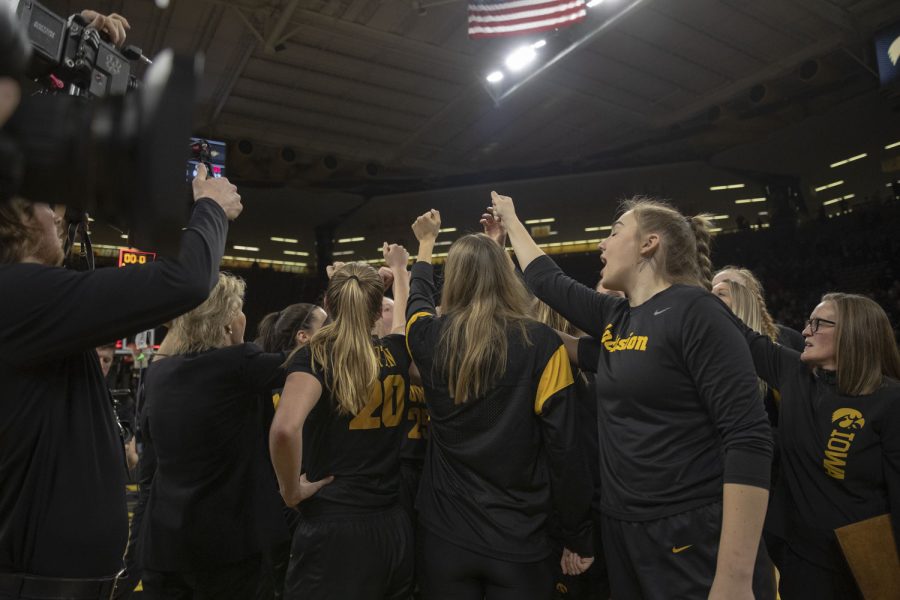 Iowa huddles together after a women’s basketball game between Iowa and Nebraska at Carver-Hawkeye Arena in Iowa City on Sunday, Jan. 16, 2022. The Hawkeyes defeated the Cornhuskers, 93-83.

The Hawkeyes (arguably) have the National Player of the Year in sophomore point guard Caitlin Clark, senior center Monika Czinano making 64.6 percent of her shots, and all five returning starters.

Still, I don’t think that’s enough for Iowa to make it to the Final Four in Minneapolis this season.

Iowa started the season No. 9 in the nation — the highest preseason ranking for the Hawkeyes in program history. Since then, the Hawkeyes have fallen out of the Associated Press Top 25 Poll and jumped back in, hovering between No. 20 and No. 25 in the nation.

A Final Four team wouldn’t lose to a mid-major opponent. Ever.

Now, the Hawkeyes are on a seven-game winning streak against Big Ten opponents. But all of Iowa’s opponents in this stretch are unranked teams that the ranked Hawkeyes should be beating.

Iowa hasn’t had a chance to prove itself with a statement win yet this season, partly because of scheduling issues. The Hawkeyes were supposed to play No. 6 Indiana, who is undefeated in the Big Ten, on Jan. 23. The Hoosiers pulled out of the game because of COVID-19 cases in their program.

The Hawkeyes are currently a No. 6 seed in ESPN’s Women’s College Basketball NCAA Bracketology. Analyst Charlie Creme has Iowa in UConn’s region, giving the Huskies and the Hawkeyes a Sweet 16 rematch in the second round.

Even if Iowa could get past Paige Bueckers-less UConn, the Hawkeyes will be stopped in the Sweet 16 or Elite Eight.

Sure, the Hawkeyes underperformed at the beginning of this season. Admittedly, Iowa’s 74-73 loss to IUPUI on Dec. 21 was pretty troubling — especially for a Hawkeye team that was ranked as high as No. 8 in the Associated Press Top 25 Poll earlier this year.

The Hawkeyes have since steadied, winning eight of the nine games they’ve played since Dec. 21. Iowa is currently riding a win streak of seven games.

The Hawkeyes seem to have finally found their rhythm — something they struggled to do at the beginning of the year.

Six of Iowa’s games have been canceled or postponed this year because of COVID-19. As a result, the Hawkeyes have endured two stretches of 10 or more days without a single game.

The more the Hawkeyes have played this year, however, the better they’ve gotten. Iowa seems to have all the ingredients Final Four teams need.

The last thing the Hawkeyes need to do to prove they are contenders is beat a ranked team. Iowa has yet to beat an AP Top 25-ranked foe this year.

With a few wins over highly rated teams like Michigan and Indiana, the Hawkeyes could skyrocket in the AP Top 25 and prove to the country that they can contend for a national championship this year.