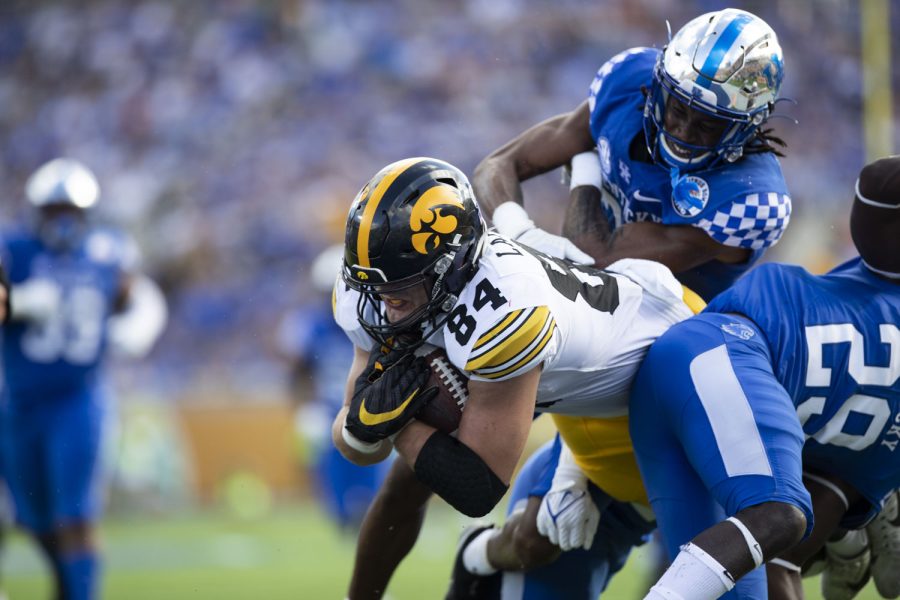 Iowa tight end Sam LaPorta dives into the end zone for a touchdown during the 2022 Vrbo Citrus Bowl between No. 15 Iowa and No. 22 Kentucky at Camping World Stadium in Orlando, Fla., on Saturday, Jan. 1, 2022. The Wildcats defeated the Hawkeyes, 20-17. LaPorta caught seven passes for 122 yards and a touchdown.

Point/Counterpoint | Who is Iowa football’s most valuable returning player?

Jack Campbell’s announcement that would return to the Iowa football team for his senior season rather than declare for the NFL Draft wasn’t necessarily surprising — at least not as surprising as his teammate Riley Moss doing the same thing.

Of all the players coming back for a final season as a Hawkeye (Moss, Sam LaPorta, Charlie Jones, etc.), Campbell’s decision will be the most beneficial to Iowa in 2022. Why is that? Let me take things a step further.

Campbell will be a first-team All-American at linebacker next season. Book it.

As a junior, Campbell finally got a full season to show off his sideline-to-sideline quickness, ability to close on the ball, and all the other attributes that make him such a force as Iowa’s defensive leader.

The first-team All-Big Ten performer led the nation in tackles last season (143), while also posting two interceptions, a forced fumble, two recoveries, and a couple of touchdowns. Not bad at all. And this upcoming season, he should be right in the middle (along with Seth Benson and Jestin Jacobs) of what could be the best linebacking corps at Iowa under Kirk Ferentz. And that’s saying something.

Despite losing three starters in the secondary and its best defensive lineman, Iowa’s defense should start off 2022 right where it left off at the end of the 2021 season. Why is that? Well, partially because the Hawkeyes have their elite middle linebacker back and better than ever for one final season.

To put it bluntly, tight end Sam LaPorta is the most valuable player returning to the Hawkeyes’ roster in 2022. Aside from Rimington Trophy-winning center Tyler Linderbaum, LaPorta was the lone player the Hawkeyes could rely on, offensively.

Linderbaum declared for the 2022 NFL Draft on Jan. 14. LaPorta announced that he’d be returning to Iowa Jan. 12.

With two somewhat inept quarterbacks hurling the ball his way this season in sophomore Alex Padilla and junior Spencer Petras, LaPorta still managed to haul in 53 of the 220 passes the Hawkeyes attempted in 2021. LaPorta netted 670 yards and three touchdowns across his 53 receptions.

Wide receiver Charlie Jones, who announced he’d be returning to Iowa for the 2022 season on Jan. 13, actually tied LaPorta for the team lead in receiving touchdowns. From a yardage standpoint, LaPorta bested the Hawkeyes’ second-leading receiver by more 300 yards, as now-sophomore Keagan Johnson picked up 352 yards last season.

Iowa’s passing offense ranked 10th in the 14-team Big Ten Conference last year. On a national level, the Hawkeyes’ passing attack ranked 109th. There are only 130 FBS teams in the nation.

Without LaPorta, the Hawkeyes’ passing game might go from bad to worse. And there’s not much standing between Iowa and the bottom of the NCAA’s passing statistics list.

The effects a LaPorta departure would have on Iowa’s offense are catastrophic. Hawkeye fans should be thankful No. 84 is coming back for another season. Otherwise, Iowa’s 2022 campaign could’ve been a disaster.