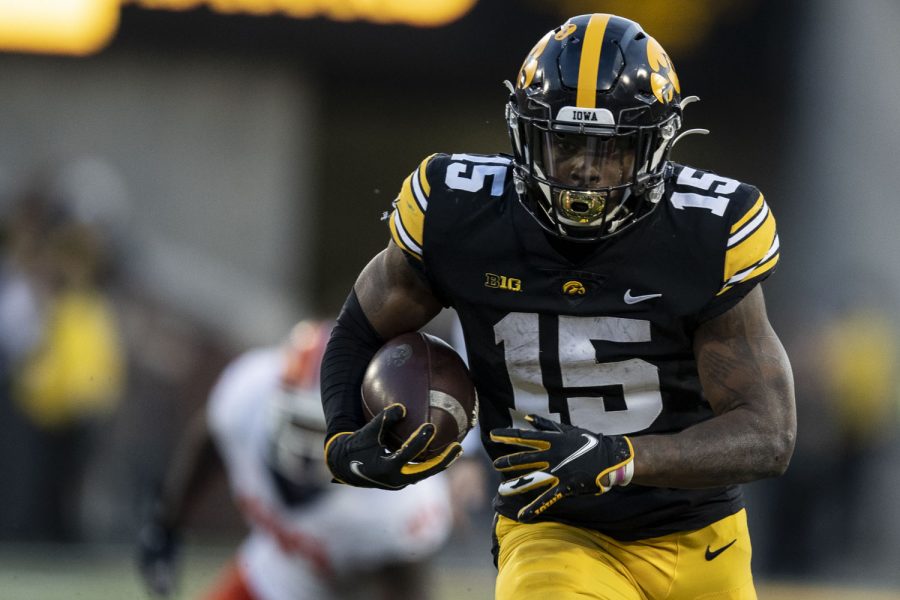 Iowa running back Tyler Goodson carries the ball during a football game between No. 17 Iowa and Illinois at Kinnick Stadium in Iowa City on Saturday, Nov. 20, 2021. Goodson had 27 carries on the day averaging 4.9 yards per carry. The Hawkeyes defeated the Fighting Illini 33-23 at the last home game of the season.

“Whoever comes out on top, I’m going to just assume right now that the turnover takeaway margin was probably in their favor,” Campbell said in a Zoom conference with reporters Monday.

But it’s not as easy as it sounds.

Iowa and Michigan will match up at the Big Ten Championship Game on Saturday in a battle of stout defenses.

The Hawkeye secondary has recorded 22 interceptions throughout the 12-game regular season, leading Division I football by three.

Moss has recorded four interceptions, and junior cash Dane Belton leads the Hawkeyes (and the nation) with five.

Michigan quarterback Cade McNamara has three interceptions on 14 passing touchdowns.  If he wants to get out of this game with his interception tally intact, he’ll need to be as precise as possible with his receivers.

The Hawkeyes will need to have good ball security, both in the hands of their running backs and quarterbacks. Iowa QB Spencer Petras has thrown six interceptions and nine touchdowns this season.

Both the Wolverine and Hawkeye offenses will be up for a challenge on Saturday, and the winner will be determined by who can limit their turnovers.