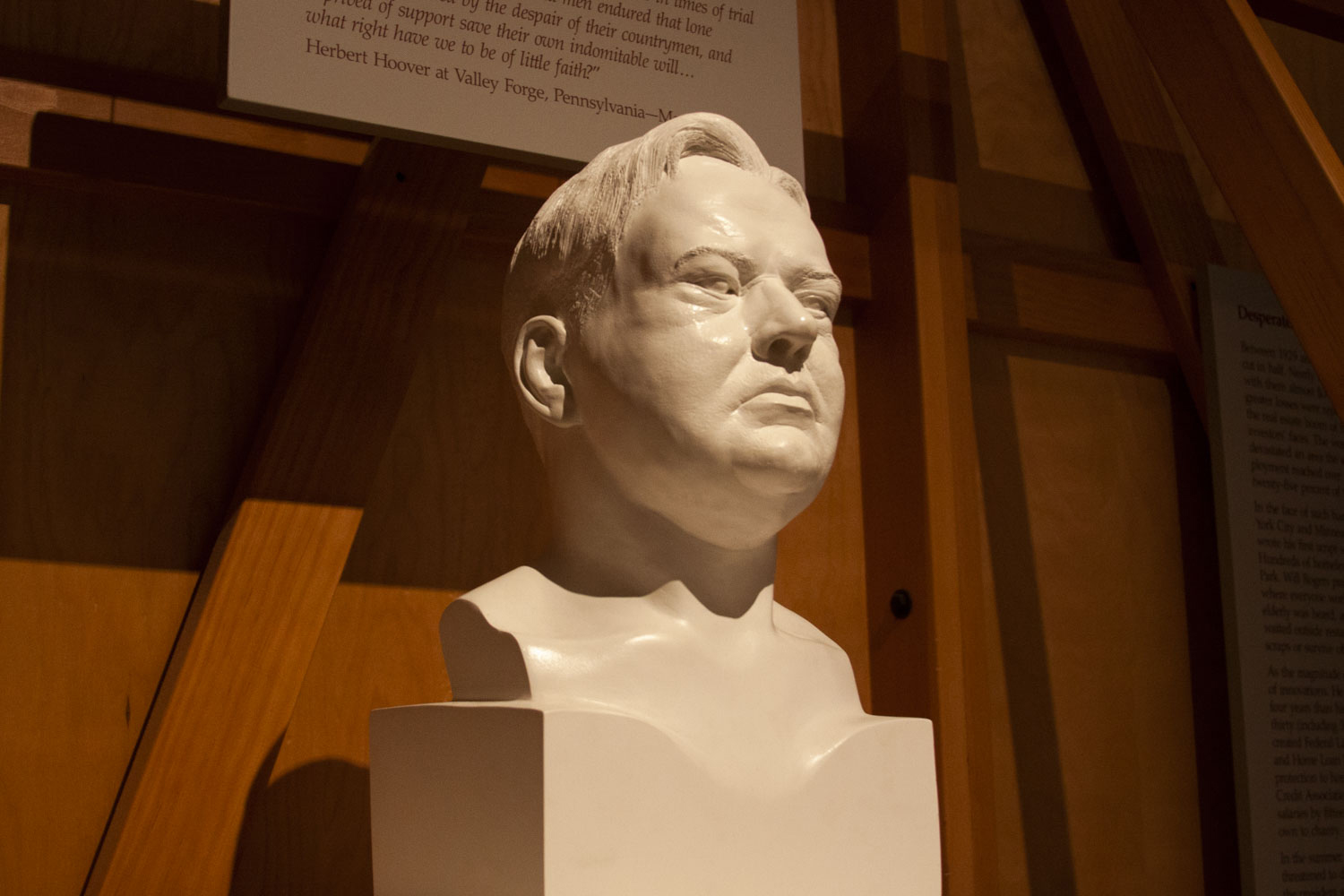 A statue of Herbert Hoover is displayed in the Great Depression exhibit at the Herbert Hoover Presidential Library and Museum in West Branch Iowa, on Friday, Oct. 29, 2021. (Dimia Burrell)

A statue of Herbert Hoover is displayed in the Great Depression exhibit at the Herbert Hoover Presidential Library and Museum in West Branch Iowa, on Friday, Oct. 29, 2021.

A renovation past due: Hoover Museum to be updated for first time since 1992

After nearly 30 years without being updated, the 31st U.S. president’s historical museum is finally ready to look to the future.

When entering the Herbert Hoover Presidential Library and Museum, the building’s age is not immediately apparent. Compared with the cluster of 19th-century cottages and shops surrounding the museum, the one-story limestone museum may initially appear modern and functional.

The reality, however, is quite different: this living legacy to the 31st U.S. President first opened in 1962, when Hoover was celebrating his 88th birthday. The most recent renovation took place in 1992 — the last thirty years have taken their toll on the building, and a major campaign to update and rebuild the museum has finally begun.

As visitors venture further through the front doors and into the cluster of dioramas and glass cases displaying pieces of former U.S. President Herbert Hoover’s life, it becomes clear that the building is in dire need of an update. The stale smell of aged books drifts through the air; drab gray carpet swathes the floor.

Fluorescent lighting makes the space feel liminal — the sweeping silence only interrupted by faint television static or the slow footsteps of visitors as they wander through the dated photos and life-size statues of the former president.

Out of the 13 presidential libraries and museums overseen by the National Archives and Records Administration, the Hoover Presidential Library and Museum has gone the longest amount of time without being renovated.

The Hoover Presidential Foundation, an organization run primarily by the Hoover family, is working to remedy this. The establishment is seeking approximately $20 million — backed by a state income tax credit bill — to demolish and rebuild the museum’s main gallery and exhibits, which lead museum-goers on a walk through the 31st president’s life and accomplishments.

President Herbert Clark Hoover was born on Aug. 10, 1874, in the eastern Iowa town of West Branch. As a young boy, his favorite pastime was fishing in the West Branch Wapsinonoc Creek, which runs through the historic Hoover museum grounds. Orphaned at the age of 10, the future president was sent to live with an uncle in Oregon and left behind his hometown in 1885.

Hoover later became a part of Stanford University’s first-ever class, graduating in 1895 with a degree in geology and prospects as a mining engineer. He met his wife, Lou Henry, who also happened to be from Iowa, during his senior year at the university.

Although he only spent a decade there, Hoover was always drawn to the fond memories he had of West Branch, and declared that was where he wanted his presidential library and museum to be built, as well as where he wanted to be buried upon his death.

Margaret Hoover, host of PBS’ Firing Line and great-granddaughter of Herbert Hoover, said an aspect of the renovations she is most looking forward to is the larger incorporation and representation of Lou Henry Hoover.

“So often, we just default to Herbert Hoover, but he was a part of a couple,” Margaret Hoover said. “[Lou Henry] was just this very extraordinary trailblazing woman, who was his wife and my great grandmother, and we want to tell their story.”

When World War I broke out, Hoover devoted a large portion of his life savings to aiding victims of famine in Europe during and after the war. Many of the museum’s exhibits are dedicated to the years of Hoover’s life spent organizing aid, including memorial videos submitted by some of the estimated nine million war victims that Hoover helped during his lifetime, many of them children.

Inspired by Hoover’s selfless actions during and after WWI, former President Warren G. Harding offered Hoover the position of Secretary of Commerce, which he served as from 1921-1928. In that time, he made several improvements to the use of radio in the U.S., as well as to infrastructure and manufacturing standards still in place today.

In 1928, Hoover ran for president and won. He campaigned with promises of peace and prosperity, only to be held deeply accountable during the stock market crash of 1929, and the inevitable Great Depression that followed, leaving much of the world in economic devastation.

With a dark smear on his reputation as a humanitarian, Hoover faced disdain from the American people that would lead him to largely leave the public eye following his loss of the 1932 re-election campaign to Franklin D. Roosevelt.

Hoover played a minimal role in WWII, although he became close friends with President Harry S. Truman despite political differences.

From 1933 to 1953, Hoover was the sole surviving ex-president and lived in New York City until his death. On Aug. 10, 1962, Hoover opened and dedicated the Herbert Hoover Presidential Library and Museum with Truman by his side. Hoover died two years later at the age of 90 on Oct. 20, 1964, in New York City, and was buried alongside his wife Lou in his hometown of West Branch near the museum grounds.

The original library and museum building were expanded multiple times since its opening, with large additions being completed in 1964, 1971, and 1974. The museum’s last renovation and addition, which cost $6.5 million at the time, was completed in 1992, and the establishment was rededicated by President Ronald Reagan that same year.

Margaret Hoover was around 12 years old when the museum’s last renovation was completed. She attended the reopening with her cousin, Allan Hoover III, and the two raised the flag together during the rededication ceremony.

“You know, I was quite a bit smaller and younger than I am. Which is to say, it’s been a really long time,” Margaret Hoover said. “We are three decades overdue for a new renovation, and so I’m really excited about the direction that this is heading in.”

Margaret Hoover is the co-chair of the campaign for the renovation of the Presidential Library and Museum alongside former Iowa governor Terry Branstad. She and Allan Hoover III are members of the Hoover Presidential Foundation’s board of trustees, who oversee much of the renovation funding process.

Allan Hoover III said he is excited to tell the story of his great-grandfather in a way that is welcoming to newer generations, and that the Hoover family, in particular, is humbled by the support of those eager to learn about Herbert Hoover.

“I feel it’s very energizing for family members like myself to want to do everything we can to help, because we believe it’s such an inspiring story that we grew up with,” Allan Hoover said.

The National Archives and Records Administration, or NARA, oversees the administration and general functioning of the establishments through its Office of Presidential Libraries. However, the organization cannot assist in the funding of a renovation for the Hoover Museum.

The reasoning for this, in part, is due to the national policy dictating that all presidential museums and libraries must be funded “with private or non-Federal funds donated to non-profit organizations,” according to NARA’s website.

Jerry Fleagle, president and CEO of the Hoover Presidential Foundation, said rounding up enough funds without assistance from the government led to the museum’s longer-than-usual wait to be updated.

“Normally, most museums try and do museum renovations every 12 to 15 years to stay current. So, we are way overdue,” Fleagle said. “In fact, all presidential libraries and museums [within NARA] have been renovated in those time frames except for Hoover’s.”

The Hoover Presidential Foundation worked with the Iowa state legislature to approve a tax credit bill announced by Gov. Kim Reynolds and Allan Hoover III in February 2021. Capped at $5 million, the Herbert Hoover Presidential Library and Museum tax credit will allow donors to claim a 25 percent tax credit on any donated amount from 2021 through 2023.

There is no minimum donation amount required for a tax credit, and both businesses and individuals are eligible. Fleagle said the bill, should it be used in its entirety, will account for a fourth of the $20 million total the library and museum would need to complete the planned renovations.

“We want all Iowans to be able to participate in this,” Fleagle said. “We’re really optimistic that we can get this thing done.”

More information on the Hoover Tax Credit Program can be found on the official renovation campaign website.

The Hoover Foundation is looking to focus on two main improvements when updating the museum: technology and interactivity. These two components of the concept design have driven up the estimated cost of the museum’s funding, in addition to physical construction costs.

Throughout the dioramas that currently make up most of Hoover’s main gallery exhibits, the technology used to present information ages the museum the most. Outdated TV’s play informational video clips covering experiences from Hoover’s life, as well as anecdotes and memorial statements from those who were helped by his various humanitarian efforts.

There are also several displayed artifacts of old technology from Hoover’s lifetime, including near-century-old radios and televisions. Some dioramas feature replicas of the items Hoover used frequently, as well as real artifacts from his childhood and various world travels.

The Hoover Foundation and museum staff, including museum director Thomas Schwartz, are working closely with BRC Imagination Arts, a museum exhibit design company. BRC has also worked on the Abraham Lincoln Presidential Library and Museum, which is not overseen by NARA.

“I do think the one thing BRC does well is that they’re outstanding storytellers. People may come in not knowing anything about Hoover, but I can guarantee you by the time they leave they’ll be changed,” Schwartz said.

Schwartz, reiterating Garner’s point, said one of the ways the Hoover museum renovation team aims to improve the overall museum experience is by assessing how current museum-goers want to learn about a historical figure like Hoover.

He said many modern museum experiences focus on the teaching of information through interactive exhibits or displays, and that the renovation will largely focus on technological interactivity when it comes to teaching about Hoover and his lifetime.

“A lot more has been written about Hoover since 1992, and the questions that the public asks today are different than what the public was interested in, in ‘92,” Schwartz said. “So the renovation allows us to take the pulse of the public of where their interests are now, and being able to accommodate that more.”

The Hoover Foundation set a goal to raise 90 percent of the funds, or $18 million, before starting demolition on the main gallery. Currently, construction is estimated to begin in May 2023.

The Hoover museum renovations are planned for completion in 2024, just in time to re-open for the late president’s 150th birthday on Aug. 10, 2024. Based on the amount of funding acquired, the specifics of the renovations may change as plans move forward.

Ultimately, Margaret Hoover said she hopes to see Hoover’s legacy as a humanitarian restored to what it once was.

“We’re going to use the latest and greatest technology to bring in new generations of people into Herbert Hoover’s story and to help connect his values, which are really timeless values, to newer generations of Iowans and Americans,” Margaret Hoover said.

Allan Hoover III said he hopes the future renovations encourage younger attendees to learn about his great-grandfather’s legacy, as he did when first visiting the museum.

“I remember as a boy going to the library and seeing a lot of glass cases throughout, with different memorabilia and everything,” Allan Hoover said. “It was so exciting walking through and feeling, ‘oh, wow,’ this is so amazing to be able to walk through great granddad’s life and to be immersed in it.”