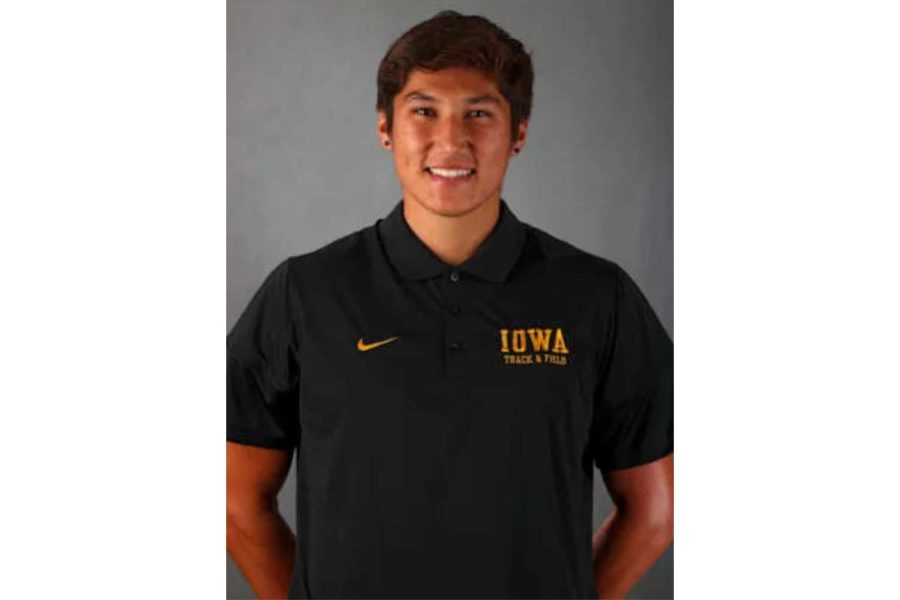 For University of Iowa third-year student and men’s track and field team member Keith Keahna, growing up on the Meskwaki settlement means his childhood experiences are different from his teammates.

Keahna grew up in Tama, Iowa, where the Meskwaki settlement is located. Some of his favorite memories include traditional feasts and celebrations.

“My family history dates back to about the 1850s when the Meskwaki came to Iowa from Kansas. They’ve been relocated to Kansas, Iowa, Oklahoma, and now back to Iowa where we’ve been from for over 120 years, at least,” Keahna said.

While Keahna went to school, he made sure he remained immersed in his culture every way he could.

“I went to a lot of Native American ceremonies growing up to get introduced to the culture. My dad would always take me and make sure that we knew where we came from,” Keahna said.

When he got involved in sports in middle school, Keahna said he had less time to participate in activities associated with his culture. However, he still attends ceremonies and events within the tribe when he has time.

“I dance powwows. I’ve been doing that since I was one or two years old,” Keahna said. “I used to go all over the place and travel and powwow, but now that we’ve gotten older, bigger, we haven’t really gone and done that as much as I’d like.”

Keahna said he tries to dance at least once a year, usually at his tribe’s annual powwow held in August. However, like many other celebrations, the event has been canceled twice because of COVID-19.

“There’s a lot of worry within the elderly in the community. [The powwow] draws a large crowd from all across the world,” he said. “They didn’t want to bring the risk of having COVID enter the settlement again.”

It’s slightly difficult for Keahna to remain completely immersed in his culture while he’s away from home, he said, but he has been able to stay invested in different ways. He’s maintained

He is also involved in the men’s track and field team’s Speak Your Truth Committee, a diversity, equity, and inclusion organization within the track program.

Paige Bohannon, an assistant coach for the track and field program, said Keahna has made an impact in bringing his point of view to the track team through the committee.

“He did a great job of bringing a unique perspective to that and also being able to educate some of the student athletes on his experience as a Native American student athlete,” Bohannon said. “It was very inspiring to know what his family’s day to day life looks like, and how that differs from what we experienced.”

When Keahna gave a presentation the previous year on one of his cultural events, Bohannnon said it was interesting to learn about the traditional dress and dances at the event.

As he was being recruited by the UI, Keahna’s confidence and work ethic is what stood out to Bohannon the most, she said.

“The cool thing about him is that he’s one of those types of kids that is silently confident, and I think that speaks to him as a person,” Bohannon said. “He has a presence about him being that he’s very tall, and he’s a big guy, but at the same time he’s very calm.”

Overall, Bohannon said the recruiting process was a way for her to learn more about Keahna and his family background.

“He came on campus and was able to explain everything to me. I wasn’t aware of the presence the Native American community has in Tama County,” Bohannon said. “He was extremely informative. He is an extremely hard-working athlete; he has a lot of confidence and his work ethic was what stood out to me most while going through the recruiting process.”