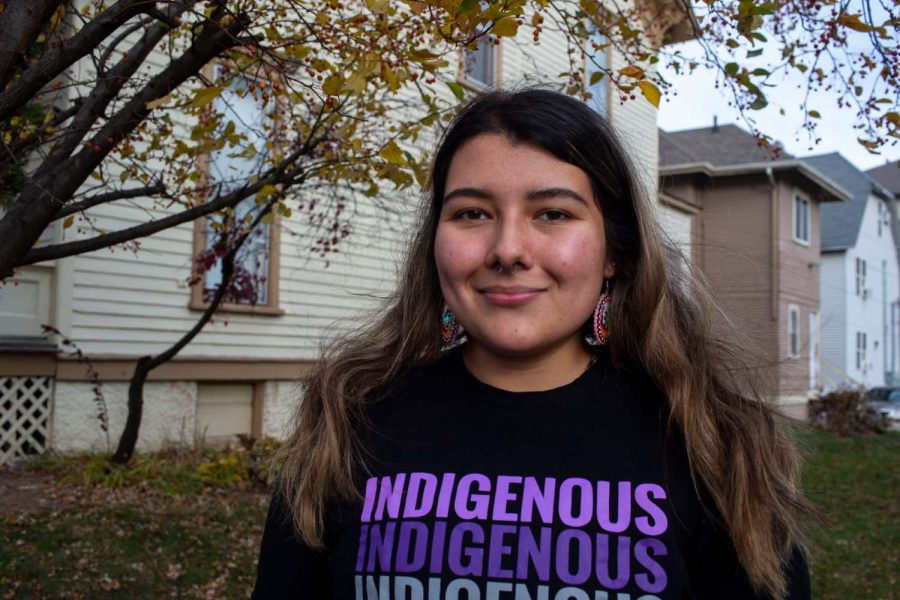 Abigail Buffalo, an indigenous student at the University of Iowa, poses for a portrait on Tuesday, Nov. 16, 2021.

Abigail Buffalo: forming a passion to help others through learning more about Native American experiences

For Abigail Buffalo, her identity as an Indigenous person has driven her passion to help others.

She is a third-year University of Iowa student majoring in human physiology and minoring in American Sign Language, and a member of the Meskwaki Sac and Fox tribe of Mississippi in Iowa. When she grew up on the settlement, Buffalo enjoyed being in a community that embraced the Native American culture and participating in traditions such as powwows.

“My family grew up going to powwows, and it’s probably my favorite time of year,” Buffalo said. “Just being able to celebrate my culture with other tribal members and community is really special.”

Buffalo was initially apprehensive about finding that identity and culture at the UI campus. After joining organizations like the Native American Student Association and working at the Native Center for Behavioral Health, she felt supported on campus.

The Native Center for Behavioral Health is a research center at the UI College of Public Health that develops programs to support the behavioral health workforce in Native American and Alaska Native communities across the U.S. As an undergraduate research assistant, Buffalo does behind-the-scenes work with projects, programs, and grants. Her responsibilities include technology support, such as sending follow-up emails after trainings, and updating the center’s website and social media pages.

One of her favorite experiences was packing gift boxes to give to different tribes after presentations. When the center travels, Buffalo said it gives gifts to presenters and attendees such as Chapstick, hand sanitizer, and sometimes hand-made cards.

Buffalo said working at the center has allowed her to hear stories of negative experiences Native Americans endure daily and why there is a need for programs such as theirs. Growing up on a settlement and learning the challenges tribes face in health care has pushed her passion to help others. After finishing her undergraduate studies, she said she would like to go into nursing school and travel to different tribes to help them with health care.

“There are programs out there to help them, but not as many as there could be,” she said. “Learning that throughout this year has really pushed me to help more and I think that what I’m going into and what to do is going to make me happy.”

Natasha Peterson, the communications coordinator at the Native Center for Behavioral Health, said she is impressed with Buffalo’s passion and attention to detail. When Buffalo told Peterson she was interested in medicine, Peterson started to serve as her mentor and has discussed her future goals.

Peterson has seen how essential it is for tribal members to be medically treated by an Indigenous person because it changes health outcomes.

“Because she is from a tribe, Abby is very knowledgeable about what health outcomes are happening,” Peterson said. “Being exposed to behavioral health is important, and her experience with the center is going to help in her future career.”

Additionally, she said that Buffalo’s identity as an Indigenous person has played an important role in the center. Because the communications team doesn’t have any Indigenous people on staff, Peterson feels like Buffalo has a valuable voice. During meetings, Buffalo answers questions on how to represent communities from an Indigenous person’s perspective.

When there was a discussion about having a land acknowledgement at trainings, Peterson said Buffalo brought a valuable perspective on how it should be read and written.

Outside the center, Buffalo is the secretary for the Native American Student Association and the empowerment chair on Dance Marathon’s Diversity, Equity, and Inclusion committee. Buffalo is vocal about her involvement in other organizations, and Peterson said it’s important for her to bring attention to groups like Dance Marathon to the center.

“Abby has been such a joy to work with, and I really appreciate her passion and work ethic,” Peterson said.