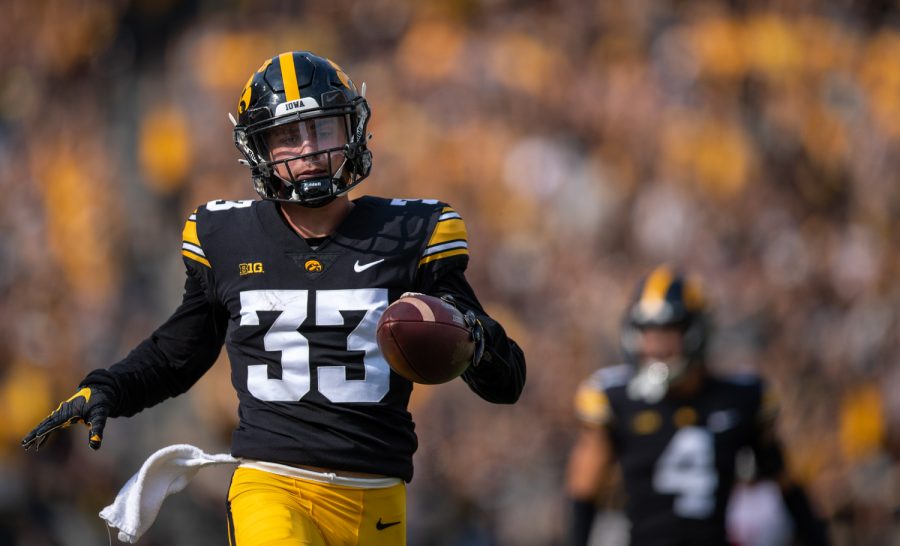 Iowa defensive back Riley Moss returns an interception for his second pick six of the day during a football game between No. 18 Iowa and No. 17 Indiana at Kinnick Stadium on Saturday, Sept. 4, 2021.

The senior cornerback has missed the Hawkeyes’ last three games with a knee injury.

As wide receiver Drew Carswell navigates his way into the north end zone at Kinnick Stadium from four yards out to score a touchdown and give Pittsburgh a 24-3 lead over Iowa, an 11-year-old Riley Moss turns to his father, Mark Moss, and asks to go home.

Mark faces his son on that fateful September afternoon and says, “Riley, if we leave now, we’re going to miss the greatest comeback in Iowa football history.”

Soon after Mark makes his bold prediction, the 2011 Hawkeyes begin to rally, scoring 28 points in the final 18 minutes of the game.

As the game clock expires, the scoreboard reads 31-28, in favor of Iowa. Riley then acknowledges that his father was right all along and thanks him for staying until the game was over.

In an interview with The Daily Iowan on Oct. 2, 2021, Mark admitted that he didn’t really believe Iowa was going to come back and win the game.

Riley only dreamed of playing football at the University of Iowa back in 2011. Now, thanks at least in part to the encouragement of his father, Riley is one of the staples in an Iowa secondary that leads the nation in interceptions.

From the moment he was born, Riley was never pushed into football. Mark — a former Waldorf University football player — and Riley’s mother, Beth Moss, decided they wouldn’t thrust Riley toward the game until he asked.

While Riley might not have been forced into football, he was destined to be a Hawkeye fan. Mark was an avid Iowa fan throughout his childhood, and he held Hawkeye football season tickets while he and Beth were raising Riley in Newton, and eventually Ankeny, Iowa.

Mark said Riley first asked about playing football for the Hawkeyes right around the same time he started playing flag football in Newton.

“I don’t know [exactly] how old he was,” Mark said. “I don’t know if it was five years old. You know, maybe, five, six, seven years old or something like that. We held season tickets. So, Riley would go with a buddy and I to games and we’d tailgate out at the Finkbine Commuter Lot. We had a lot of fun, and I remember Riley asking me one day, ‘You think I can play for the Iowa Hawkeyes?’ And I think, you know, like every parent, I just said, ‘Absolutely, I know you can.’

“Like lots of things, sometimes you say things to your kids and whether you believe it or not . . . you just make them believe it,” Mark added. “I think that was just one of the things that we did.”

The journey to Iowa City begins

As Riley aged, he started to put his athleticism on full display and make it clear that a post-diploma athletic career might be in the cards for him.

In high school, Riley earned All-State and All-District honors as a football player.

After his junior year of high school, Riley sat down with his parents, who asked him what his post-high school goals were. Riley told his mother and father that he wanted to play Division II football or higher. He said if he couldn’t achieve that goal, he’d try to run track in college.

Riley, Mark, and Beth began to create a list of Division II and Division I FCS and FBS schools across the country that Riley might like to attend. Once they’d created a list of schools Riley could enroll to play football at, Mark and Beth asked their son which school he’d most like to go to.

As they might’ve expected, Riley told them his dream school was the University of Iowa.

At that point, however, Riley wasn’t on Hawkeye head coach Kirk Ferentz’s radar.

“It’s funny, when we recruited him, it wasn’t like we were on him as a sophomore or freshman,” Ferentz said. “It was later in the process.”

With one year of high school remaining, Riley began attending football camps at universities like Northern Illinois, North Dakota State, and South Dakota State. Riley did not participate in the Hawkeyes’ summer camp in 2017.

Riley’s performance in the camps he did go to, coupled with the abilities he showcased on the track, helped him grab the attention of college football coaches across the Midwest.

The first school that invited Riley to join its football program once he graduated from Centennial High School was North Dakota State — the institution he originally committed to.

Moss’ commitment to the Bison didn’t last long, though.

In August 2017, Riley received a letter in the mail from the UI. Once he opened and read it, he tossed it aside. Riley then left the Moss household with one of his friends to go fishing.

“Reese Morgan reached out to him and said, ‘Riley, we know you’re committed to North Dakota State, and we’d love to talk to you, but if your commitment is solid, we’ll leave you alone,’” Mark said. “Riley said, ‘Nope, I’d like to talk with you.’”

Riley did a few game visits to Kinnick Stadium and subsequently decommitted from North Dakota State to sign with the Hawkeyes.

“Every time [Riley] went for a game visit at Iowa, he called [then-NDSU head coach Chris Klieman] and said, ‘Hey coach, I just wanted to let you know that I’m going to go to a game at Iowa,’” Mark said. “He kept [Klieman] posted along the way, and you know, I remember after Riley decommitted [from NDSU] and committed to Iowa . . . Klieman reached out to me and said, ‘You’ve raised a really good kid there, and we appreciate how open and honest he was with us along the process.’”

When Riley joined the Iowa football team ahead of the 2018 season, he brought the athleticism he had in high school with him to college. That helped him play in all 13 of Iowa’s games as a true freshman. Riley even started in five of the Hawkeyes’ contests that season.

But Riley didn’t have the football IQ needed to play cornerback at the Division I level, and it showed — particularly in matchups against Purdue.

Riley was part of a secondary that gave up nearly 1,000 passing yards and nine touchdowns in three matchups with the Boilermakers from 2018-20.

“[Riley] went from just being a great athlete, who we could throw out there and play corner and make some plays, to now,” senior safety Jack Koerner said. “He’s really developed into kind of a football mind, who we can sit down with outside the facility and talk about football and he knows what I’m talking about. Rather than, you know, early on in his career when he just knew, ‘Hey, cover this guy.’

“So, he’s really progressed as a football mind,” Koerner added. “He’s always been that great athlete who can cover guys. But that’s something that’s made him become a much better player is just understanding kind of the way football works a little bit and the way our defense works.”

Riley’s enhanced understanding of football, his position, and Iowa’s defense has helped him elevate not only his own game, but Iowa’s pass defense as a whole this season.

In Iowa’s 34-6 win over Indiana Sept. 4, Riley recorded two pick sixes. His first interception came with 12:45 remaining in the first quarter. Riley caught a tipped Michael Penix Jr. pass at the Indiana 30-yard line on the east side of Kinnick Stadium and raced into the north end zone to score.

Riley picked Penix Jr. off for a second time with under two minutes left in the first half. An errant throw from Penix Jr. fell right into Riley’s hands at the Iowa 45-yard line. The 6-foot-1, 194-pound senior went untouched into Kinnick Stadium’s south end zone for a score.

“To be honest, there was nothing going through my mind just because it happened so fast,” Riley said. “Next thing I know, I’m in the end zone. I didn’t even know how to react. It was just so quick, and I will never forget it for the rest of my life.”

Riley is part of an Iowa secondary that has recorded an NCAA-leading 19 interceptions in 2021. In the Big Ten Conference, the Hawkeyes rank second, sixth, and fourth in scoring, pass, and total defense, respectively. The Hawkeyes’ defense is also the most efficient in the Big Ten, statistically speaking.

Iowa’s secondary has allowed about 206 pass yards and one touchdown per game in 2021.

“I think [the secondary] has come a really long way,” Koerner said. “We’ve gotten a lot tighter and close-knit as a group, where that level of trust is really, really something people on the outside maybe don’t understand, necessarily. That level of trust is really important on the field . . . All of us have gotten a bit more experience too and that’s really helped.”

Iowa has been without Riley for its last three games. He suffered a knee injury in Iowa’s 23-20 win over then-No. 4 Penn State Oct. 9.

Riley intercepted a pass thrown by Nittany Lion backup QB Ta’Quan Roberson, hitting the turf at Kinnick Stadium in the process. When officials blew the play dead, Riley popped right up off the ground. But as he began to celebrate, he fell back down onto Duke Slater Field, grabbing his leg in pain.

Riley exited the game and did not return. Soon after his injury, Riley was seen sporting a knee immobilizer.

Before Riley got hurt, the Hawkeyes were 6-0. Since his injury, they’ve gone 1-2. In two of their games without Riley, the Hawkeyes didn’t record a single interception.

Ferentz said at his weekly press conference on Tuesday that he expects Riley to play in Iowa’s hole matchup against Minnesota on Saturday — barring any setback during the week.

Riley’s lifelong dream of playing for the Hawkeyes was fully realized on Oct. 6, 2018, when he earned the first start of his college career against Minnesota. Now, over three years later, Riley will resume his career-best season against the Golden Gophers. Riley hasn’t played a game in 34 days, but he is still tied for the Big Ten lead with four picks this year.

“It’s really cool,” Riley said. “[Playing football at Iowa] was my dream since I was a little kid … I kept working hard and then I worked hard here. So, the dreams became a reality. So, that’s why I’ve really kept setting goals and trying to reach those goals.” 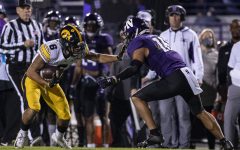 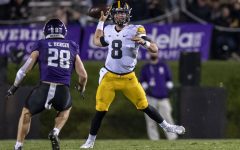 Hawkeyes confident in quarterback Alex Padilla ahead of first start 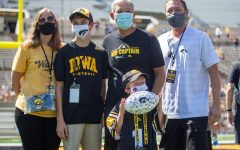