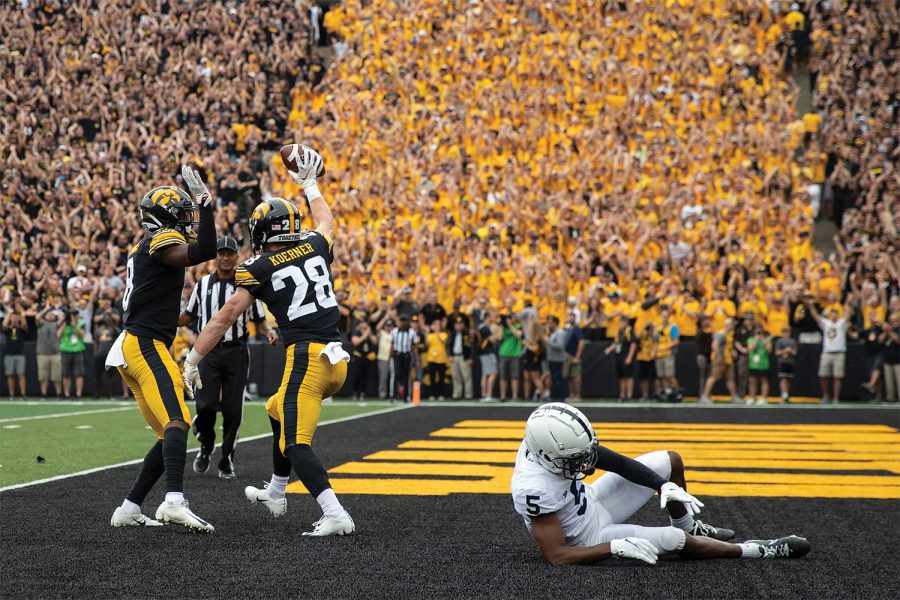 Iowa defensive back Jack Koerner gets up to celebrate with defensive back Matt Hankins during a football game between No. 3 Iowa and No. 4 Penn State at Kinnick Stadium on Saturday, Oct. 9, 2021. The Hawkeyes defeated the Nittany Lions 23-20.

Iowa's defensive backs have been elite since last year's loss to Purdue.

The Iowa football team hasn’t lost a game in a long time. The Hawkeyes have won 12 consecutive games over the last 349 days.

But the Hawkeyes still remember what defeat feels like.

Iowa suffered its two most recent losses back-to-back at about this time last season. The Hawkeyes fell to Purdue, 24-20, blowing a six-point lead on Oct. 24, 2020. Northwestern erased a 17-point Iowa lead the following week to claim a 21-20 win at Kinnick Stadium.

“I guess, just looking back, those first few losses were kind of gut-wrenching,” senior defensive end Zach VanValkenburg said Tuesday. “We really had to evaluate what our practice habits were and things like that. After that Purdue loss last year, we were practicing really hard, and you know, we didn’t pull that next one out against Northwestern. But we just kept practicing, harder and harder, and I think that’s been the difference.”

Since that loss to Northwestern, the Hawkeyes have outscored their last 12 opponents, 438-162.

Iowa hasn’t used any groundbreaking strategies or embraced any superstitions since its winning streak started. Rather, the Hawkeyes have just tried to stick to their not-so-unique brand of football to win games.

“I think it’s just complementary football,” senior safety Jack Koerner said. “It really is. [Our] offense, defense, and special teams all work in unison. If the defense is not holding up their end, then we trust the offense [to get] in the end zone. We can always rely on special teams to do their job as well. I think that’s really kind of the hallmark of what’s going on. It’s just all three phases really working together and doing their jobs.”

While Koerner might not admit it, the secret ingredient to Iowa’s recent success might be the very unit he’s a part of.

Iowa’s secondary has intercepted 16 passes this year — the most in the nation. Iowa’s defense has intercepted 7.1 percent of the passes thrown against it this season. The national average is 2.7 percent.

“Yeah, I joke about it,” Iowa head coach Kirk Ferentz said last week. “It’s not like we have a drill for this stuff. If we did, we should do it more. I think that’s experience. But it’s also a team effort. All the guys will tell you that. The guys on the back end would tell you that.”

The secondary has also helped the Hawkeyes score three defensive touchdowns this season — two of which were interception returns for touchdowns by senior Riley Moss in Iowa’s season-opening 34-6 win over then-No. 17 Indiana at Kinnick Stadium. The Hawkeyes’ three touchdowns are the second-most recorded by any defense in all of college football.

Iowa has forced an NCAA-best 20 total turnovers this season. The Hawkeyes’ turnover margin currently sits at plus-15 — also the best in the nation.

The Hawkeyes rank third in the country in pass defense efficiency, ninth in total defense, and fourth in scoring defense.

Last year against Purdue, Iowa surrendered 282 passing yards and three touchdowns. That is the most passing yards the Hawkeyes have allowed in a game over the past two seasons.

“If you follow [Purdue head coach Jeff Brohm’s] career, [the Boilermakers] have always been really good offensively, so it starts there,” Ferentz said Tuesday. “They challenge you in a lot of different ways. They make you defend a lot of different things. They have gadgets and trick plays on special teams and offense. So, they make it a tough preparation. And they have good players. They have hurt us with deep balls.

“You really have to defend everything, and that keeps pressure on you, defensively. So, we got a lot of respect for them and for obvious reasons. I’m well-aware of that, believe me.”

The piece of Purdue’s offense that Iowa’s secondary had the hardest time defending in 2020 was junior wide receiver David Bell. The 6-foot-2, 205-pound vertical passing threat caught 13 passes for 121 yards and three touchdowns.

“It’s hard [to defend Bell],” Ferentz said. “We haven’t done a good job in two years. I don’t know. I haven’t gone back. I don’t want to depress myself and look at how many catches he’s had in two years, but it’s significant.”

“Bell is one of the best players that I’ve seen in quite some time,” Ferentz added. “We certainly haven’t had much luck defending him. He’s playing at a real high level, once again, predictably there.”

The personnel that populated Iowa’s defensive backfield the last time the Hawkeyes played the Boilermakers still remains. While the names on the jerseys in Iowa’s secondary haven’t changed, the Hawkeyes still believe they’ve come a long way since they last faced Bell, pre-12-game win streak.

“I think we’ve come a really long ways,” Koerner told The Daily Iowan Sept. 28. “We’ve gotten a lot tighter and close-knit as a group. That level of trust is really, really kind of something that maybe people outside [the team] don’t really understand, necessarily. [People don’t understand] how much that level of trust is important on the field. So, that’s grown, obviously. All of us have gotten a little bit more experienced, too, and that’s really helped us out a lot.”

Now closer than ever, Iowa’s secondary believes it can slow Bell and help the Hawkeyes pick up a full-circle victory against Purdue.

“Obviously they’ve had our number in the past,” Koerner said. “Last year was just a heartbreaking loss that we feel like we shouldn’t have lost. Going into the bye week [this season] 7-0, that’s what we’re focused on this week. It would be a great win, but not necessarily any more important than any one we’ve had in the past or will have in the future.”

Iowa will be without starting cornerback, senior Riley Moss, for Saturday’s 2:30 p.m. Homecoming matchup with Purdue at Kinnick Stadium. Junior Terry Roberts is slated to start in Moss’ place.

“What people don’t see is, in practice, how much [Roberts] dedicates himself to the [cornerback] position and how well he’s been doing,” Koerner said. “Obviously, he’s behind Matt [Hankins] and Riley, two of the best corners in the country. So, obviously that’s why he’s not playing. But he can step in there and do the job, as he proved [against Penn State Oct. 9]. He’ll do his job on Saturday.”

The Hawkeyes aren’t putting more stock in Saturday’s matchup than they have any other game they’ve played during the past two seasons.

“Obviously, it’ll be nice to get a second crack at them after last year,” VanValkenburg said. “Obviously, that’s been on our minds. But we’ve been trying to prepare for every team individually. You know, take it a week at a time. Obviously, we have the bye week next week. So, right now, we have a one-week season. That’s kinda how we’re framing it.”