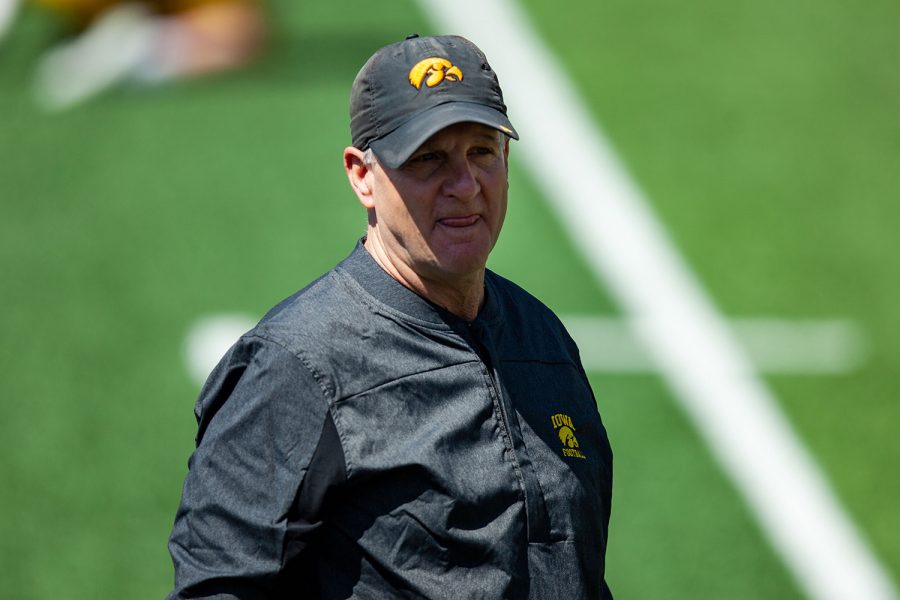 Iowa defensive coordinator Phil Parker watches a drill during a spring practice at Kinnick Stadium on Saturday, May 1, 2021.

Before the 2021 college football season began, it looked like Iowa’s defense would be tested in Weeks 1 and 2, facing Indiana and Iowa State quarterbacks Michael Penix Jr. and Brock Purdy, respectively.

The Hawkeyes were, however, prepared to meet the challenges presented by both QBs.

Iowa has forced seven total turnovers this season, six of which have come through the air. Penix Jr. and Purdy each threw three picks against the Hawkeyes. Both were ultimately benched in their respective matchups with Iowa.

The Hawkeyes have only turned the ball over once this season. Senior running back Ivory Kelly-Martin lost a fumble against Indiana in Week 1. So, Iowa has produced six more turnovers than it’s given up this season.

Iowa’s offense hasn’t quite hit the same stride as its defense yet. Nevertheless, the Hawkeyes haven’t been totally anemic offensively — scoring four touchdowns in two games.

Iowa’s solid defensive performances have led it to two wins over AP top-25 teams in the first two weeks of the 2021 season. Iowa is the only team to beat two ranked squads so far this season, giving the Hawkeyes the best résumé in the Big Ten through two weeks of action.

They say offense comes and goes, but defense is about effort. If the defense can stay stingy and continue to pounce on opportunities to force turnovers, and the offense improves, Iowa is going to be tough to beat this season.

For the last four years, Ohio State football has run the Big Ten Conference. The No. 9 Buckeyes have won four-straight league titles, and they’re still in pursuit of their fifth this season.

Given the Buckeyes’ track record, I find it difficult to believe another team may rule the Big Ten’s roost, especially Iowa — a team that hasn’t even won its division since 2015.

So far, the Hawkeyes’ résumé does look better than Ohio State’s. But a single-possession loss to then-No. 11 Oregon last week isn’t enough to convince me that the Buckeyes aren’t the best team in the Big Ten.

Iowa’s defense has scored three of the Hawkeyes’ seven total touchdowns and forced seven turnovers this year. The Hawkeyes have surrendered just 286 yards and 11.5 points per game through two weeks of action.

The Buckeyes’ defense hasn’t been as good as Iowa’s. Ohio State has scored once defensively and manufactured two takeaways. The Buckeyes have given up 33 points and 455 yards per game.

I don’t think Iowa’s defense can sustain its current turnover or scoring paces throughout the season. I do, however, believe that Ohio State’s offense can keep playing at a high level all year long.

So, while Iowa’s résumé does look better than Ohio State’s right now — this week’s AP Poll reflects that — I don’t think the Hawkeyes are the Big Ten’s best team. Iowa will likely cool off after its hot start to the season, and Ohio State will sure up its holes on defense to reclaim its throne atop the Big Ten.