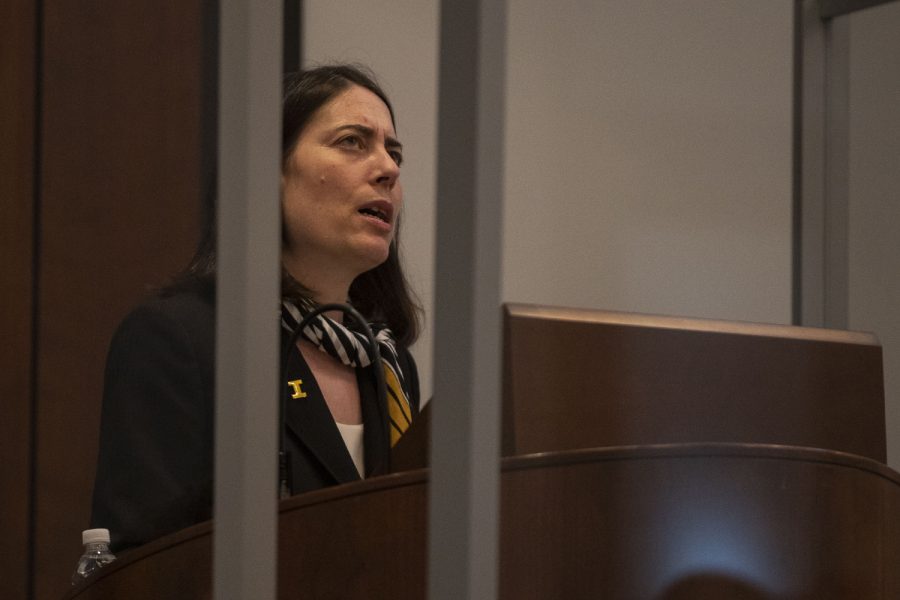 As dean of the Penn State Law school, Hari Osofosky has made herself an accessible campus leader and worked through a pandemic and a racial justice reckoning, student leaders and Penn State colleagues say.

Hari Osofsky was one of the first people that greeted Davis Blount when he stepped onto the Penn State Law campus as a prospective law student.

Blount, now a third-year law student and the vice president of Penn State Law’s Student Bar Association, had hesitations about moving from North Carolina to central Pennsylvania for law school. When he visited campus for the first time, he said the dean welcomed him and his wife by name and gave the visit a unique personal touch.

“It genuinely felt like the whole event was being planned, secretly, just so that I would choose Penn State Law, and Osofsky only wanted me to attend,” he said. “I think it goes back to that personal touch and her insistence to push past her very high position at the law school to reach the individual.”

Osofsky, the dean of Penn State Law and of Penn State’s School of International Affairs, is one of four finalists in the search for a new University of Iowa president. She leads a law school with about 380 students, which is ranked No. 60 among law schools in the most recent US News and World Report rankings.

Before becoming dean, Osofsky taught law at the University of Minnesota, Washington and Lee University, and University of Oregon, among others. Her scholarship focuses on environmental and climate law.

According to students at Penn State Law, Osofsky is an approachable figure who makes herself a recognizable face on campus. She holds regular office hours where students can pop in with any concerns, and she often participates in campus-wide celebrations and events.

Kelsi Robinson, president of Penn State Law’s Student Bar Association, said she was surprised at Osofsky’s presence on campus, coming from an undergraduate school where the dean was not someone students had regular access with.

“She does listening sessions now, so she’s very approachable, which is shocking,” Robinson said. “But I’m very appreciative of it because she takes a lot of the time to listen to students.”

Osofsky said at a public forum on April 12 that, as a leader, she engages with students, faculty, and staff, and listens to shared-governance bodies and the broader campus community.

“I love connecting people and building institutions, and this has been a core of my leadership work throughout my career,” she said. “My leadership style includes active engagement in student, faculty, staff, and alumni events, and being willing to have fun with them.”

Osofsky has an “infectious” school spirit, Blount said. Blount said Osofsky was one of the first to sign up for a “Pie in the Face” fundraiser for THON, a campus organization that raises money for child cancer patients.

During an annual auction fundraiser for the Public Interest Law Fund, Osofsky has auctioned off a unique culinary experience for courageous students: bug tasting, where she cooks up edible bugs and serves them to the highest bidder.

“I think her willingness to set aside for a moment her high position in the law school and really engage is something that’s well known around the campus,” Blount said.

State lawmakers and the state Board of Regents have made freedom of speech a central topic to the universities’ governance in the last year.

“I’ve chosen to be pretty outspoken,” Osofsky said during the forum. “This past year, and before and after, but I think it’s important that we speak out in support of anti-racism values. And, you know, and obviously, I’m now treading into complex political ground by saying that. I think that there are ways in which we can acknowledge support and recognize freedom of speech and diversity of viewpoints and at the same time, say that we value diversity, equity and inclusion.”

She signed onto a letter with 150 other law deans condemning the Jan. 6 insurrection on the U.S. Capitol. UI College of Law Dean Kevin Washburn didn’t add his name.

George Floyd’s murder in summer 2020 renewed calls for racial justice and sparked civil rights protests across the country. Those messages reached corners of every industry, including at Penn State College of Law.

“We felt like we weren’t being supported or valued unless we fit the diversity quota for the school,” she said. “Mostly because things were happening back to back, you know, George Floyd, Breonna Taylor, Ahmaud Arbery, and we heard nothing from the administration.”

Osofsky quickly set up a series of meetings with Swinton and Robinson, in which Swinton said she asked about how the law school could become a more equitable institution. To answer such a heavy question, Swinton said, she needed to pull back with other members of BLSA to establish concrete steps the administration could take.

“And that doesn’t mean you know, sending a statement every single time something happens, but having concrete steps to make it a better place,” Swinton said.

Out of continued meetings with Osofsky, Swinton said, came several changes students had requested. The administration sent out a collegewide email, which included resources about how to protect yourself during protests and correcting the record on looting.

“That turned into actually us building a critical race theory and anti-racism library at Penn State Law that can be accessed virtually through the Penn State Law Library,” Swinton said.

That library includes documentaries, podcasts, reading materials, and even some poetry for people to learn about systemic racism and how to address it.

Osofsky also set up a diversity, equity, and inclusion committee where a group of professors and administrators would meet regularly with each affinity group’s leader, such as the president of BLSA or the Women’s Law Caucus.

Born out of those committee meetings was a better bias reporting system, Swinton said, in which added transparency allowed students, faculty, and staff to know that bias complaints were being processed.

In her public forum, Osofksy highlighted contributing the seed money to the George Floyd Memorial scholarship, a fund initiated for a student in the Black Student Law Association after Floyd’s death. After gifts from the university and other campus leaders, the fund accumulated to more than $125,000.

Overall, Swinton said Osofsky’s best leadership quality is her ability to learn — she doesn’t assume she “knows it all.”

“She’s just very patient and understanding because even if it might seem minuscule to her, which we’ll never really know, she does take it into consideration,” Swinton said. “So, I think that’s one of the best parts of her leadership is just like, she absorbs it all.”

In 2020, higher education has undergone massive transitions — including students learning online and in hybrid environments.

For the 2020-21 academic year, Associate Dean for Academic Affairs Jill Engle said the 380-student college pledged to offer every class in person and remotely, in an effort to meet individual student needs.

Engle said the pandemic was one of the biggest challenges the school has faced in the decade she’s spent at Penn State.

Osofsky, though, didn’t want to scale back, she said. She asked the college leadership to push forward with creating a new master’s program. In the last year, the college created a master’s of legal studies and partnered with other colleges to create a master’s in engineering, law and policy, and a master’s in law and taxation.

“Which would be a very heavy lift, you know, even in a normal time, even not in a pandemic,” she said. “We stayed the course and that was because she believed that we could, and therefore we did.”

In all, Engle said, she’d characterize Osofsky’s work as “transformative leadership.” In her CV and during the forum, Osofsky emphasized that Penn State Law had increased its rankings in the coveted US News and World Report 22 spots (from 82 to 60), which Engle credited to Osofsky’s leadership.

“Transformative leadership is really, to me, that is the story on her leadership style,” Engle said. “She’s super engaged. She has an unflagging energy. She never slows down. She is always willing to get in there and roll up her sleeves and work on projects. She’s definitely an engaged leader.”

As part of each candidate’s visit, they met with university stakeholders like the student governments for both undergraduate and graduate students, the Faculty Senate, the Staff Council, and the president’s cabinet.

“We kind of asked, ‘How would you build that trust?’ Because there’s this gap where students don’t trust the President’s Office right now … and she gave very, very good answers and explicit detail about projects that she has worked on during her time,” Smock said.

Loren Glass, president of the UI chapter of the American Association of University Professors, said he was impressed with Osofsky’s credentials around environmental policy and sustainability, suggesting that she could be an expert in moving the university to a sustainable future. He also said he appreciated her past work around diversity, equity, and inclusion.

“Obviously, the proof will be in the outcome for whoever ends up coming here,” Glass said. “But I felt like she had a good understanding of those issues and had evidence from her prior achievements and prior work that she had taken those issues seriously.”