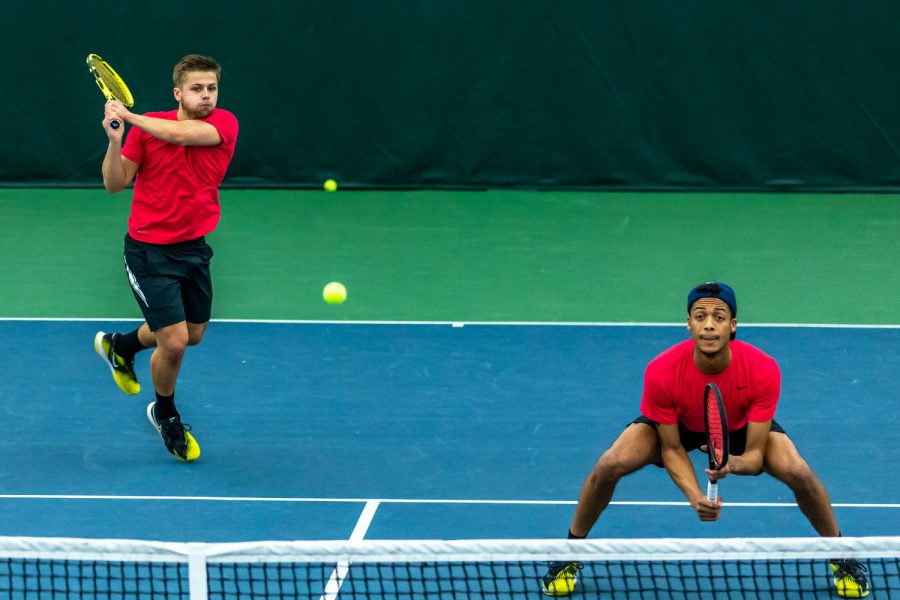 Point/Counterpoint | Why has Iowa men’s tennis struggled in 2020-21?

Two DI staffers try to identify the root of the Hawkeyes’ woes this season.

The Iowa men’s tennis program is a week away from its final Big Ten Tournament, and the Hawkeyes haven’t exactly met expectations this year, posting a 5-12 regular season record.

Iowa suffered its worst losing streak since 2014 this season. The eight-match stretch of losses is the longest the Hawkeyes have endured under the watchful eye of head coach Ross Wilson.

A lack of singles depth has been Iowa’s Achilles’ heel all year.

After 17 regular season matches, the Hawkeyes have totaled just three wins out of the No. 5 and No. 6 slots in their lineup.

When the Hawkeyes were nationally ranked last season, they went 8-4 out of the No. 6 spot.

Senior Jason Kerst has been solid as Iowa’s No. 6 before, boasting a 18-9 record at the bottom of the Hawkeyes’ lineup.

Sophomore Nikita Snehzkho and freshmen Peter Alam and Rudra Dixit have all tallied zero wins in singles this season.

So, Wilson has been forced to move Kerst into the No. 5 position in the Hawkeyes’ lineup. In the No. 5 spot, Kerst has struggled all year.

In nearly every match the Hawkeyes have played this season, Iowa’s top four players have been forced to play from behind, as the Hawkeyes’ No. 5 and No. 6 players have not found much success at any point this year.

If Iowa is to draw its final season out longer than a couple more matches, the Hawkeyes will need to quickly improve their singles play, particularly in the No. 5 and No. 6 positions.

Iowa men’s tennis has faltered in doubles this season, forcing the Hawkeyes to face a cascade of problems throughout the season.

While the English duo of Will Davies and Oliver Okonkwo has been solid all year, the Hawkeyes have struggled to find a second reliable doubles pair.

Okonkwo and Davies were recently ranked second in the nation in doubles play by the Intercollegiate Tennis Association. The pair’s No. 2 doubles ranking is good for an Iowa men’s tennis record.

While the Hawkeyes can bank on Davies and Okonkwo winning consistently, they haven’t found a second doubles pair that can help them earn the doubles point on a match-by-match basis.

This season, Davies and Okonkwo have won seven of their nine completed doubles matches. Despite that, the Hawkeyes have only earned the doubles point twice, following a Davies-Okonkwo victory.

Hawkeye head coach Ross Wilson even tried to separate Davies and Okonkwo this season, in an attempt to improve Iowa’s odds to earn doubles points.

This year, Davies has played three matches alongside senior Kareem Allaf, and Okonkwo has been paired with sophomore Nikita Snezhko once and junior Joe Tyler twice.

In the three matches that saw Okonkwo and Davies separate, Iowa claimed the doubles point once.

Overall, Iowa has earned the doubles point in just six of its 17 total dual matches.

Last year, when the Hawkeyes were on the precipice of their first-ever NCAA Tournament berth before COVID-19 cut the season short, doubles play was Iowa’s strength.