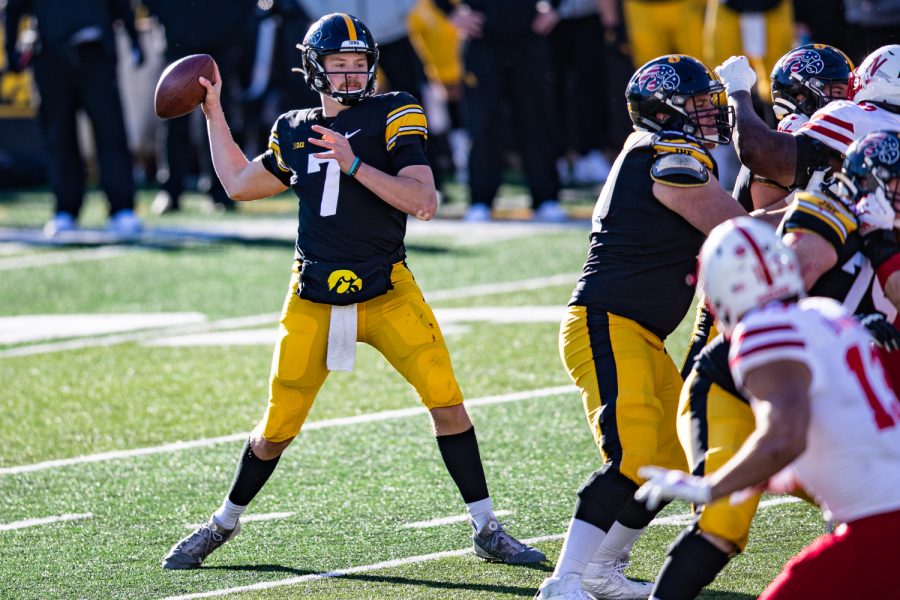 Iowa quarterback Spencer Petras attempts a pass during a football game between Iowa and Nebraska at Kinnick Stadium on Friday, Nov. 27, 2020. The Hawkeyes defeated the Cornhuskers, 26-20.

Point/Counterpoint | Will junior Spencer Petras start at quarterback for Iowa football in 2021?

Iowa quarterbacks coach Ken O’Keefe said last week that the Hawkeyes have an open competition underway at that position this spring. And I believe him.

But I think when Iowa opens the 2021 season Sept. 4 against Indiana, Spencer Petras will be under center to start his second season as the team’s starting quarterback.

Alex Padilla and Deuce Hogan will have chances to prove me wrong over this spring and summer. O’Keefe recently complemented Padilla’s accuracy and ability to lead Iowa’s offense, and also said Hogan is progressing well. I just think Petras’ eight games of starting experience will be too much for them to overcome.

At times, the San Rafael, California, native looked like you’d expect a first-year starter to look against Big Ten competition — antsy in the pocket, off on some timing throws, and at times careless with the football. By the end of the season though, Petras did play his best football of the year. He combined to throw five touchdowns and no interceptions in Iowa’s wins over Illinois and Wisconsin.

With an actual offseason to develop this time around, I’d expect Petras to continue to grow from those promising performances to end the year and return to the field as a more polished and accurate passer in 2021.

Iowa has a quarterback competition on its hands this offseason, but with the way Petras played to end last season and the starting experience he already has, I’d bet we’ll see No. 7 on the field again for the Hawkeyes next season.

A little over two weeks into spring practice and just under 22 weeks away from Iowa football’s 2021-22 season-opener against Indiana, junior quarterback Spencer Petras seems to be the unquestioned favorite to start under center for the Hawkeyes this fall — though I’m not sure he should be.

Iowa’s last two starting quarterbacks — Nate Stanley and C.J. Beathard — marginally improved, if at all, from their first years as starters to their second.

If Petras follows that same trend, Iowa shouldn’t hesitate to start Hogan or Padilla in 2021-22 if its goal is to win a Big Ten title.

What Iowa has not seen is Hogan or Padilla starting at quarterback in college. So, while Petras’ ceiling is likely predictable, Padilla and Hogan’s are not.

Why should Iowa settle for the certainty of what Petras is, when it doesn’t know how good Hogan or Padilla could be?

As the saying goes, don’t risk it, no biscuit.