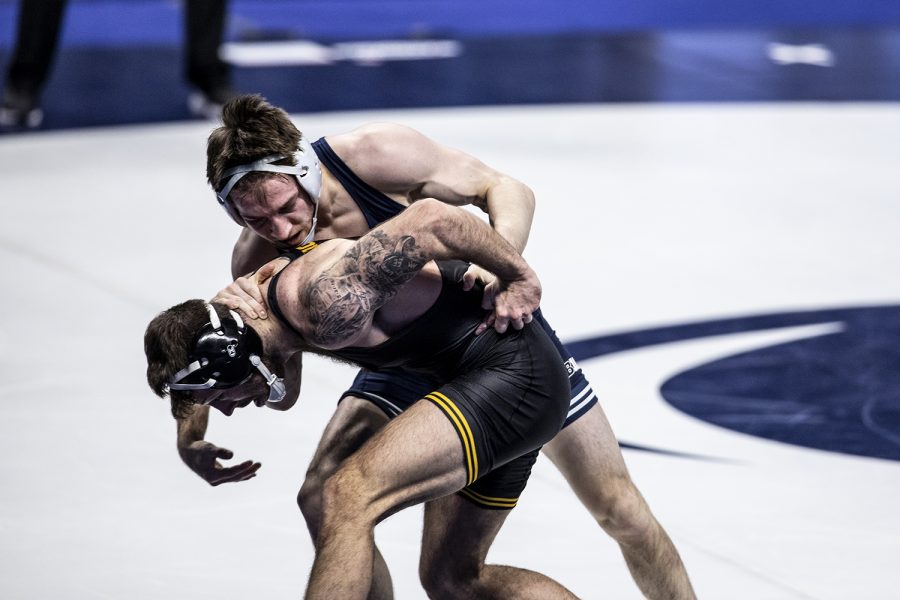 Iowa’s Michael Kemerer attempts to escape against Penn State’s Carter Starocci during the finals of the Big Ten Wrestling Tournament at the Bryce Jordan Center in State College, PA on Sunday, March 8, 2021. Kemerer won the match by decision 7-2. This is Kemerer’s first Big Ten Title.

Point/Counterpoint | Will Iowa wrestling win another national championship in 2021-22?

With the 2020-21 NCAA Division I Wrestling Championship now in its pocket, Iowa wrestling has reignited its dormant dynasty.

Until the 2020-21 NCAA Championships, the Hawkeyes had not claimed a team title since 2010 — quite a drought for a program that has won 24 national championships over the last 46 years.

Given that, I expect Hawkeye head coach Tom Brands to bottle up the magic Iowa had in 2020-21 and use it to win a second-straight national title in 2021-22.

With all of Iowa’s 2020-21 lineup expected to return in 2021-22, there’s no reason to believe the Hawkeyes won’t repeat as national champions.

Kemerer and Eierman had defeated Lee and Starocci at the 2020-21 Big Ten Championships just two weeks prior.

Had Kemerer and Eierman won their NCAA Championship finals matches against Starocci and Lee, Penn State would’ve finished about 27 points away from first place with just two national champions to its name.

If Iowa wins close matches against foes like Lee and Starocci in 2021-22, it should have no problem claiming another NCAA championship crown.

The 2021-22 college wrestling season will be unlike anything the sport has seen before. The NCAA’s decision to grant all of its 2020-21 winter sports athletes an unconditional extra year of eligibility will allow all of 2020-21’s seniors to return next winter.

So, rosters will be larger and, perhaps, older than ever before.

The NCAA’s decision also allows the Hawkeyes to bring every wrestler from their 2020-21 national championship team back for another wrestling season.

Although the Hawkeyes will likely be the odds-on favorite to win an NCAA title again next season, there are certainly some worthy challengers that stand in their way.

In 2021-22, it will be nearly impossible for Iowa to overlook Penn State. The Nittany Lions have won eight of the last 10 NCAA Championships, and four of their wrestlers won individual national titles in 2020-21.

In 2020-21, six wrestlers in Penn State’s lineup were freshman — the most of any top-placing team at the NCAA Championships.

Highly coveted high school recruits like 125-pound Robert Howard and 149-pound Beau Bartlett cracked the Nittany Lions’ starting lineup as true freshmen last season, and they will only get better as their careers continue.

Additionally, Penn State has emerged as an early favorite to land this season’s 165-pound NCAA Division I Wrestling Champion Shane Griffith. Griffith will likely transfer from Stanford before next season as the institution elected to cut its wrestling program at the end of the 2020-21 academic year.

With some improvement at their less established weights and the potential addition of Griffith, the Nittany Lions — who finished just 15 points behind the first-place Hawkeyes at the 2020-21 NCAA Championships — could challenge Iowa in 2021-22.