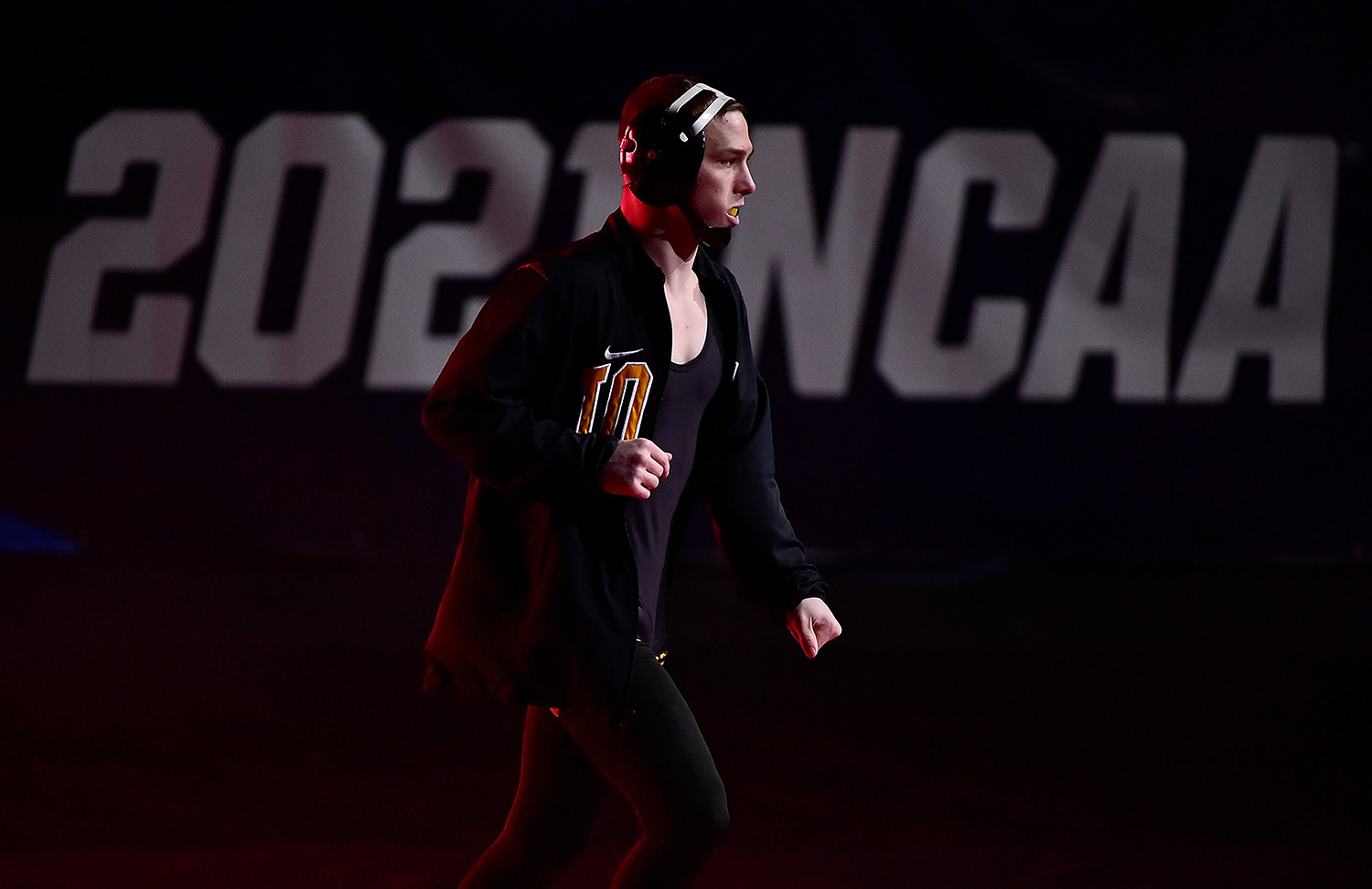 Eight days after tearing the ACL in his left knee, Spencer Lee did what he didn’t have the opportunity to do last year — win a national title.

Spencer Lee isn’t a fan of excuses. But if the Iowa wrestling program’s 125-pounder used one over the weekend, nobody could have blamed him.

Eight days before Lee defeated Arizona State’s Brandon Courtney on Saturday to win his third consecutive NCAA championship, the senior tore the ACL in his left knee. Lee wrestled five matches in a three-day span on one functional leg.

“I didn’t want to tell anyone because F excuses,” Lee said after his final match when he revealed what he had to go through to win. “Excuses are for wusses. That was a tough tournament for me. I could barely wrestle. I could barely shoot. I can’t sprawl. I believed in my coaching staff and everyone that believed in me and here I am so here you guys go.”

Though it was clear he had some type of injury when wrestling in St. Louis Thursday through Saturday with braces on each leg, his dominant stance was not lost at the Enterprise Center.

With that considered — actually even without that considered — Lee dominated on the mat in St. Louis, outscoring his opponents, 59-8, and winning his final match, 7-0, against Courtney right before Iowa was presented with the 2021 NCAA Champions trophy.

The trophy presentation, and his third individual title, were over a year in the making for Lee.

When Lee joined the Iowa wrestling program, one of his goals was becoming a four-time individual national champion. But while Lee was on his way to a third title in March 2020, COVID-19, at the time, made that goal unattainable.

On March 12 of last year, exactly one week before the 2020 NCAA Championships were supposed to start, Lee and the Hawkeyes learned while practicing in the wrestling room in Iowa City that the championships were canceled. Director of wrestling operations Moriah Marinelli walked into the room to hand coach Tom Brands a memo saying sports were off for the foreseeable future — a day after the NBA suspended its season.

The Hawkeyes would have to wait another year before winning the program’s 24th title and their first since 2010. And Lee’s hopes of becoming the program’s first four-time champ seemed crushed. He couldn’t win four if he didn’t have the opportunity to compete for four.

Upon hearing the news of the canceled 2020 championships, Lee’s first thoughts were not about himself losing the opportunity to win an individual title, but rather about being concerned for the seniors who would not get the chance to experience winning a national championship.

After the Hawkeyes won the national championship Saturday, Lee said he was emotional because of those seniors that didn’t get a chance to win the year before.

“When Spencer committed to Iowa, he told me he wanted two things,” Larry Lee, Spencer’s dad, said in February. “He wanted to win four national titles, and he wanted to make sure Iowa was back on top of the wrestling world. He wanted them to win a team title. Those were his two goals when he picked Iowa.

The NCAA granted all winter sports athletes an additional year of eligibility in October, no matter how much they competed this winter season. That gave Lee the opportunity to win what would be a coveted fourth national championship.

But first, he had to win his third. 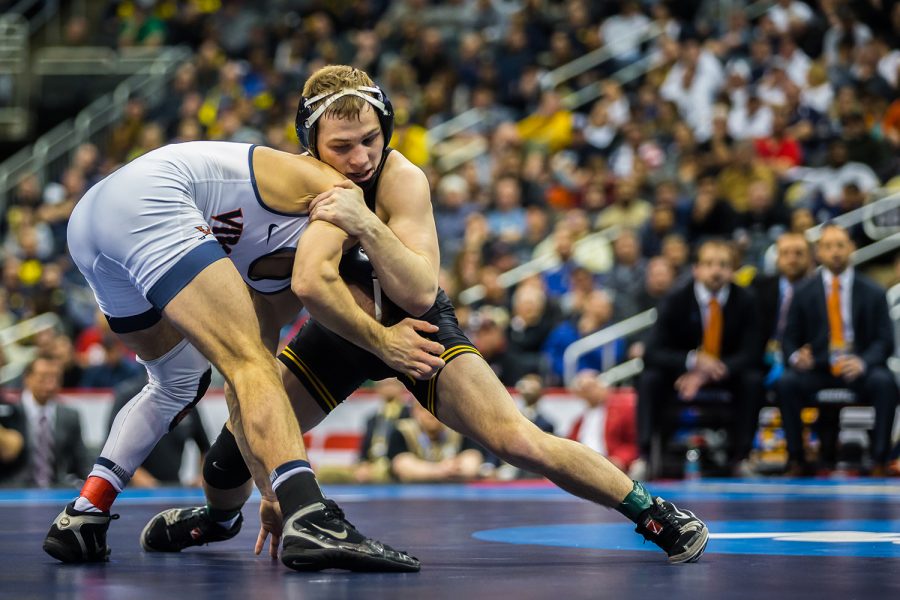 Before being named a three-time champion Saturday night, Iowa clinched its national championship that afternoon in the medal round. Iowa finished with 129 points — 15.5 points higher than second-place Penn State.

The Hawkeyes had a wrestler qualify for each of the 10 weight classes for the 2021 NCAA Championships and finished with seven All-Americans. Lee was Iowa’s only individual champion at this year’s tournament, and his seven-point margin of victory in the finals was the largest of any finals match.

Iowa’s medical staff was shocked that he could do anything on the mat.

Brands, elated to see his team win the program’s 24th national championship and his fourth as Iowa coach, acknowledged Lee’s significance to the team.

“You can never overstate his importance,” Brands said. “It’s certainly as a spark plug, as an ignitor, but it’s way, way more than that.”

This isn’t the first time Lee won a national championship with an ACL tear. Lee tore his right ACL in high school, then in 2019 he re-injured it in the second period of his national finals match, which he also won via shutout.

Lee’s devotion to helping make Iowa the team that it is now came before his first match in a Hawkeye singlet.

The Murrysville, Pennsylvania, native could have gone to his home state university, Penn State, where he knew many of the wrestlers. But Lee chose Iowa not because it was the easy choice, but because he believed it was the right one. Lee’s father said the University of Iowa remained the best place for his son to win four NCAA titles and an Olympic gold medal.

It wasn’t just Lee by himself in his mission to bring Iowa a national championship.

From last season’s cancellation until now, the Hawkeyes have been ready for the chance to raise the national championship trophy.

Lee has been preparing ever since the cancellation, staying ready for whenever a season would take place amid the pandemic. And he has known for most of his life that he wanted to be an outstanding wrestler.

As he was returning from his final football game in sixth grade, Lee prepared to tell his dad the three sports he wanted to play moving forward.

“Three?” Larry Lee thought to himself.

For a kid who said he loved wrestling at around 8 or 9 years old and had Olympic aspirations by age 10, Larry Lee says he was caught off guard by his son’s comment — at least initially.

“I was really shocked,” Larry Lee said. “I was like, three sports? All right, this is a kid that said he’s always wanted to focus on wrestling. ‘Are you sure? What three sports are they going to be?’ He said ‘freestyle, Greco, and folkstyle.’ So, I just laughed and said ‘OK.’ And that’s exactly what he did.”

Now as a four-time All-American and three-time national champion for the Hawkeyes, the word to best describe Lee is “dominance.”

Why? Let’s start with his performance on the mat. After going 18-0 in the 2019-20 season, the 125-pounder won the Dan Hodge Trophy, the wrestling equivalent of the Heisman Trophy.

Spencer Lee just won his third NCAA wrestling championship at Iowa, and he says he did it with no ACLs 😳 pic.twitter.com/OVIBtfibCf

Lee was presented with the trophy on Jan. 5 at Kinnick Stadium in front of family, coaches, and media at the McCord Indoor Club Level while the field outside was covered in snow. Still, after the championships were canceled the previous spring, accepting the trophy, which honors the top collegiate wrestler in the country, still didn’t feel right to Lee.

“As you all know, the NCAA Tournament is the pinnacle of wrestling,” Lee said that day. “You don’t really feel like your season is finished unless you win that. I’m not going to say I didn’t deserve the Hodge Trophy, but I’m also the only one that won the Hodge that didn’t win a national title. Think about that, right? I mean, I’m hoping to win it next year, win the national title, earn it this time in my mind.”

It appears after dominating the 2021 season that Lee will be awarded with another Hodge Trophy.

Lee, a sport and recreation management major, has developed a good relationship with the university, especially with UI President Bruce Harreld. That unusual friendship began after Larry Lee emailed Harreld during Spencer Lee’s freshman season requesting he having a car near Hillcrest Hall to avoid getting frostbite on the way to practice at Carver-Hawkeye Arena.

After winning his first national championship in March 2018, Lee met Harreld at the Old Capitol for about 30 minutes and made a connection with him. That led to a skit-interview with Harreld about his mindset on his wrestling success, a video which featured the pair conversing on a CAMBUS and at Bread Garden Market in downtown Iowa City.

Harreld announced his retirement in October, and the UI is in the process of appointing his successor, but Lee said he would win a national team championship for Harreld before he left. Mission accomplished.

Lee energized the Hawkeyes in 2021 to be NCAA champions by attempting to use every second to his advantage.

At the team’s first dual of the season against Nebraska, it took a mere 81 seconds for Lee to pin his opponent, Liam Cronin.

It took Lee longer to pin his other three opponents in the regular season, but a fall is a fall, and they were all in the first period. In all his regular season matches, Lee didn’t allow a single point. Somehow, he improved even from his Hodge Trophy season.

The last match Lee lost collegiately was in the 2019 Big Ten Championships against Sebastian Rivera, who was with Northwestern at the time. Lee entered the third period of that match up 3-0 but gave up four consecutive points to Rivera before forcing the match into sudden victory with riding time. Rivera won by a takedown with 18 seconds left.

Since then, Lee has won 35 consecutive matches — including two Big Ten titles — by heading into every match to score points.

In those 35 matches, Lee has earned 10 falls, 13 technical falls, and six major decisions — and let’s not forget the time Minnesota forfeited against Lee in 2020 when the wrestler who was supposed to face him was hurt.

Lee’s outstanding performance — the way his teammates see it — is science fiction.

“He’s very unique,” teammate and 165-pounder Alex Marinelli said of Lee, who he also described as easygoing and a video game fan. “We call him Yoda because he can do things with his opponent that is just inhuman, and he just kind of uses the force and turns guys and pins them and [technical fall] them within the first period.”

When Lee won his first national championship in Cleveland in March 2018, he pointed to and made eye contact with his parents after the referee raised his hand. He said to his parents afterward that he made the gesture because he would not have been there without them and the sacrifices they made for him to get to that stage.

Even with no left ACL, Lee is still focused on competing at the Olympic Trials on April 2-3 in another step to achieving another one of his goals — winning Olympic gold.

Then after that, Lee will be back in a Hawkeye singlet next season, chasing the goal that’s stood in front of him as soon as he made it to Iowa City: winning a fourth national championship.

“I go out there and wrestle my hardest and I score points for seven minutes or more if needed,” Lee said. “I won three [titles], awesome. Good for me. We won the team title, awesome. That’s what we came here to do. This is what I wanted and this is what I’ve been training for my whole life.

“Now we worry about what’s next. That’s all that matters.”