Being located in a former art museum poses challenges for the team in its unusual architecture, but Petkewec said she is personally grateful for the abundant space. Located in the southernmost half of the old UI Museum of Art, the usable rooms are built around a large, hollow square space near the building’s south entrance.

Though the 50-by-50 echoey cavity is now empty, it once served as the home to Jackson Pollock’s Mural. A faint white waterline over a foot above the floor marks where the flood waters stood for several weeks when much of the UI campus flooded in 2008.

The Old Museum of Art was once called “the last remaining casualty of the flood” by former Facilities Management Director Don Guckert. When the building filled with water, it permanently displaced over 14,000 individual works of art that would no longer be insured if they remained in a high-flood-risk area.

Because the building itself remained largely undamaged, however, it needed to be used for a different purpose. The costume department moved into the space in 2017; staff offices for the Stanley Museum of Art and theatre classrooms occupy the north half of the theater building.

“The costumes had been in the basement of the Theatre Building and had been flooded out, so they had to put us somewhere,” Petkewec said. “Like the things that had been in Hancher, all of that got moved out, then they had to figure out where to put us and our friends from the museum, and so we all ended up in this building together because it couldn’t be used as a museum again.”

Now, instead of art, the costume department stores over 29,000 individual costume pieces in its storage space, valued at over $1 million, according to the department’s last full inventory count in 2018. In the room’s center, rows of floor-to-ceiling double-decker racks are burdened with hangers full of tightly packed clothes. Each section is labeled in the event of another flood so that racks can be quickly evacuated and later reassembled in the same order as before. Surrounding the perimeter of the space are rows and rows of shoes, organized by type and size. 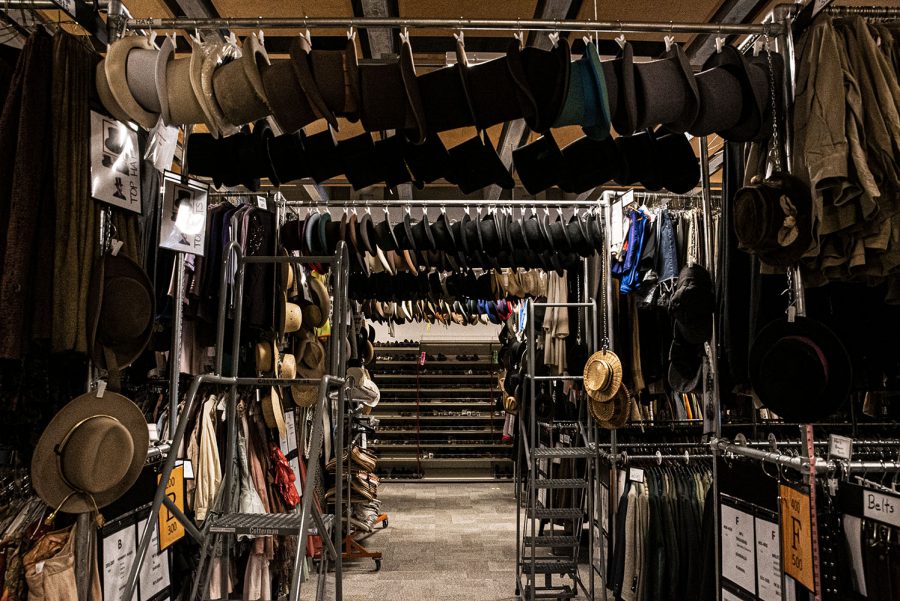 Gallery|9 Photos
Tate Hildyard
A row of hats is seen in the University of Iowa Costume Shop in the Old Museum of Art on Thursday, January 7th, 2021. Because of pandemic regulations, "The People Before the Park" will be streamed digitally as opposed to playing for live audiences.

Everything is so well organized, Petkewec can immediately tell when something is out of place. While walking through “the hall of hats,” the shop manager quickly identified two that had been hung incorrectly.

Because the shop is a nonprofit entity of the state, all costumes within are considered state property and cannot be given away, thrown out, or sold, unless they are donated to another nonprofit or considered a “dead” garment that is damaged beyond repair. Petkewec estimated the stock increases by 100 pieces each season.