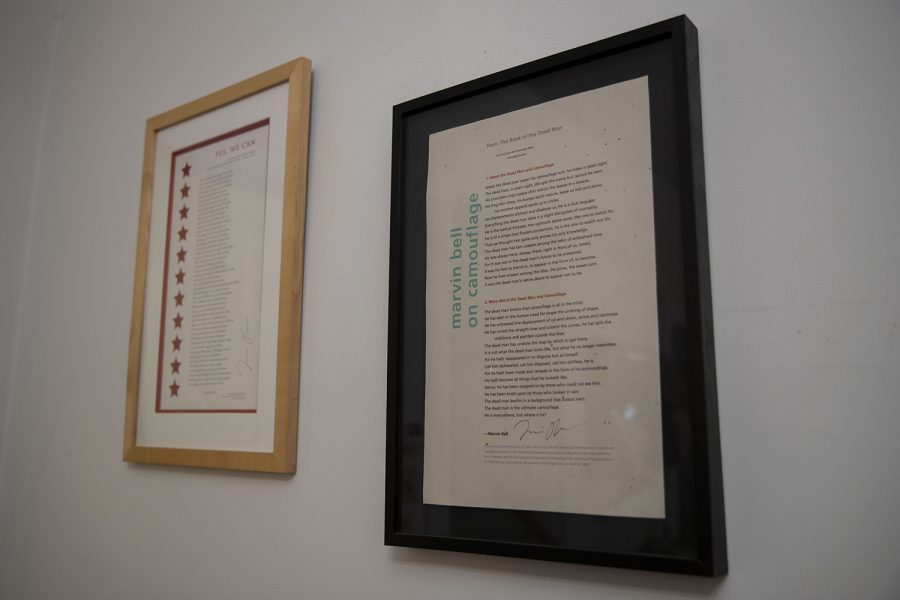 Frames of Marvin Bell’s poetry are seen on Saturday, Jan. 30, 2021 at the Bell family’s house in Iowa City. Around the living room, the Bell family decorated the space with gifts, prints by Marvin, artwork from friends, trinkets from their travels, and framed poetry by Marvin.

“The espresso machine lets go the steam someone may write in the mirror. It is an impulse that survives disaster. The guns fail when surrounded by writing.” – Marvin Bell, “Writers in a Cafe.”

The International Writing Program director took a sabbatical leave in Santa Fe, New Mexico, a few years after meeting Bell at the Middlebury Bread Loaf Writers’ Conference in 1978. Bell would call every morning at 8:30 to chat about life, poetry, and upcoming works.

“We just fell into the habit of talking on the phone every day, and that led to more and more things together,” Merrill said. “When I came here [Iowa City] in 2000, one of the things that excited me was knowing that I would be in Marvin’s town.”

Marvin Bell and me taking a break from a poetry workshop to spend a day in Yellowstone a long time ago. pic.twitter.com/XzIoFHQzRX

Phone calls turned into lunches where the two would joke, banter, and most importantly, Merrill noted, listen to each other. They collaborated for the first time in 2007 on a book to celebrate the 40th anniversary of the International Writing Program, the beginning of a series of collaborations between the two thereafter, including After the Fact: Scripts & Postscripts.

Executive Director of the Iowa City UNESCO City of Literature John Kenyon said Bell touched the lives of others wherever he went, whether that was dedicating his poetry to the city, reading his work at fundraisers, or taking the time to make meaningful conversation with everyone he met.

While away in the summertime, Marvin and Dorothy let former students and friends — many of them writers themselves — act as “housekeepers.” That generosity allowed many of their guests to spend time working on their novels in the Bells’ Iowa City home. 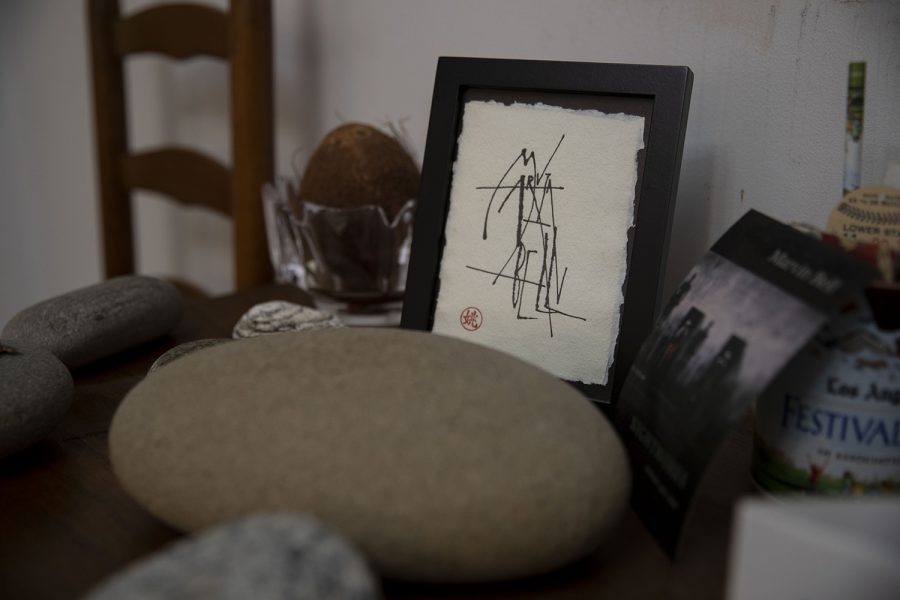 Gallery|20 Photos
Hannah Kinson
An art print is seen behind stones from the Northwest where the Bells would spend their summers on Saturday, Jan. 30, 2021 at the Bell family's house in Iowa City. The family revisited stories together in memory of Marvin Bell, who was the first Poet Laureate of Iowa and longtime Iowa Writers’ Workshop professor at the university.

Many of Bell’s former students remember him as much more than a teacher. He was a mentor and for some, a father figure who cared deeply for his students. His former student Juan Felipe Herrera, who was named the 21st U.S. Poet Laureate in 2015, often tells the story of how he made the decision to pawn his beloved guitar one day when he desperately needed money. Marvin took it upon himself to buy the guitar himself and return it to him.

At the Zoom reading in November, Herrera said he still believes Bell was the person who brought him into the workshop to this day.

When he wasn’t teaching, Bell was promoting the work of his students, said Wiegers. The deep connection Bell made with each one of his students allowed him to advocate for them in a way many other teachers could not, he said.

“He promoted the work of poets who I wouldn’t have expected him to, who were writing differently than he was or had a different approach … and I think probably because he knew them personally, in the same way that he knew me,” Wiegers said.