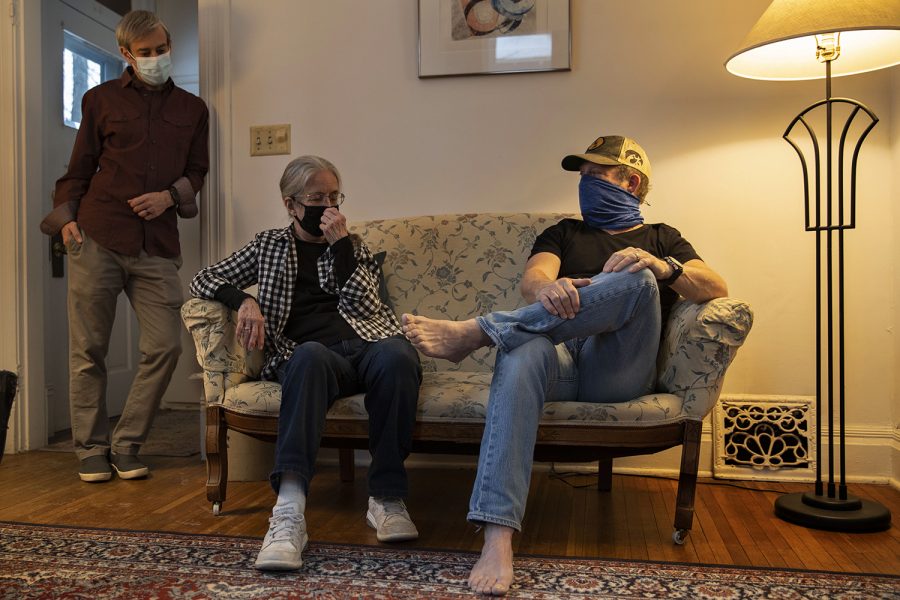 (From left to right) Jason, Dorothy, and Nathan Bell speak with The Daily Iowan in an interview on Saturday, Jan. 30, 2021 at the Bell family’s house in Iowa City. The family revisited stories together in memory of Marvin Bell, who was the first Poet Laureate of Iowa and longtime Iowa Writers’ Workshop professor at the university. “He was kind and he was loving and he was affectionate,” said Dorothy Bell. “And these two are just like that. And also, they’re so super competent, they can handle anything that life throws at them. That’s the way Marvin was, that’s the way they are. They’re helping me get through this, because I couldn’t do it without them.”

“You will be green again, and again and again.” – Marvin Bell, “Mars Being Red”

Nathan Bell remembers growing up in a household full of laughter. Sitting around the dinner table, he, Jason, and Marvin would all crack as many jokes as they could, trying to make Dorothy laugh. When he remembers his father, he remembers him laughing.

“I think of him as laughing and I always have,” Nathan said.

The 61-year-old folk singer shares the memory of Bell’s sense of humor with all who met the poet. Michael Wiegers, editor of the Copper Canyon Press — which published Marvin’s “Dead Man” poetry collections — said the poet’s natural sense of play was evident in everything he did. He distinctly remembers Bell’s laugh from when the two of them and Dorothy would spend time at the Bell’s small summer home on a bluff in Port Townsend, Washington, which overlooked the Port Townsend Bay.

“He had such a boyish laugh, a giggle almost, that he would break out in,” he said.

When at book signings for collections of his celebrated “Dead Man” poems, Marvin stamped each book with a little dancing skeleton alongside his signature, Wiegers recalled. The signings would be long affairs, he said, because Marvin would take the time to have a thoughtful conversation with each person in line.

Even as he neared the end of his life, Nathan said his father remained remarkably composed, doing what he could to continue to bring joy into their home. When he got his father’s survivor’s information, he saw that Bell had drawn a caricature of himself, the same one he drew to end most of his letters written to his son. The caricature smiled up at him, holding a pennant that read, “It’s okay.”

“He just wanted people to be happy,” Nathan said.