Iowa forward Luka Garza returns to the bench during a menÕs basketball game between Iowa and Iowa State at Carver-Hawkeye Arena on Friday, Dec. 11, 2020. Garza finished with a game-high 34 points.

March Madness in December: No. 1 Gonzaga, No. 3 Iowa meet in potential game of the year

The Hawkeyes and Bulldogs clash Saturday at 11 a.m. on CBS in a top-three regular season showdown that could be a preview of things to come.

Shortly after Iowa’s blowout Dec. 13 victory over Northern Illinois, the Hawkeye men’s basketball Twitter account sent out the final score, along with a caption: “And now we set our sights on Gonzaga.”

But in reality, sights have been set on this game since it was officially scheduled on Oct. 19, even when it wasn’t the team’s top focus.

“Playing this game is something everybody on the team has looked forward to,” Iowa guard Connor McCaffery said. “Now that it’s here, we’re going to be locked in.”

For a nonconference matchup in December, Saturday’s game in Sioux Falls, South Dakota, at the fan-less Sanford Pentagon has all the intrigue as it could.

Gonzaga is No. 1 and Iowa is No. 3 in the Associated Press poll.

The Hawkeyes have the nation’s best player in Luka Garza, and a loaded roster featuring seven players with starting experience. Corey Kispert was a preseason All-American for the Zags, and Jalen Suggs is a likely lottery pick in next year’s NBA draft.

The matchup may be the premier game of the regular season across college basketball.

And the winner will likely stay, or emerge, as the No. 1 team in the country.

“When you make a decision to play college basketball, you hope for opportunities like this on this kind of stage,” Iowa head coach Fran McCaffery said. “And that’s what we have. So I’m happy for the guys. And I think they’re mature and smart enough to recognize the challenge before us.”

“This is what you dream about as a kid working out,” Garza said. “It’s what I’ve worked toward my whole career.”

This is a dream matchup for Garza, and it’s one the Hawkeyes have worked to be a part of. Iowa’s No. 5 preseason ranking was its highest in 65 years.

The Hawkeyes are 6-0 this season, and in this week’s poll, the Hawkeyes received a first-place vote for the first time since 2015. The last time Iowa was involved in a top-three showdown was in 1987, when the No. 1 Hawkeyes defeated the No. 3 Hoosiers at Carver-Hawkeye Arena.

McCaffery took over a flat Hawkeye program 11 years ago and has since built it back up to prominence.

Gonzaga’s run as one of the premier programs in college basketball goes back decades. The Zags have reached No. 1 in the nation in five of the last nine seasons, including each of the last three.

The Zags were the top-ranked team in the country heading into the season, and have stayed there through three weeks of play. Mark Few, Gonzaga’s 22-year head coach with a record of 602-124, has already led his team against two top-15 opponents this season in Kansas and West Virginia.

And there could have been another.

Gonzaga has only played three games this season. The Zags were forced to pause activities through Dec. 14 and cancel five games, including their Dec. 5 matchup with No. 2 Baylor, because of positive COVID-19 tests within their program.

The Hawkeyes will be the first opponent the Zags see on the floor in more than two weeks.

“They would be a handful in a normal situation,” Few said Monday on his radio show. “But we’re basically coming off a layoff where we haven’t done anything… Then oh by the way, you have to game plan for the best offense in college basketball right now.”

Iowa and Gonzaga share high rankings in the KenPom efficiency metrics. That ranking system has Iowa as the top offense in the country, with Gonzaga at No. 2.

“They have shooters and slashers, they have so many good players, are a veteran bunch, and lose nothing when they go to the bench,” Fran McCaffery said. “They share it, they play it fast and move it. There’s a reason why they’re ranked No. 1.”

Garza leads all of men’s college basketball with 29.2 points per game and a 69.1 shooting percentage from the field.

Gonzaga also poses two of the top scoring threats in the country in Drew Timme, Garza’s matchup in the post, with 23.3 points per game, and Kispert with 22.3.

“Both teams push the ball, both teams have shooters, and both teams score on the inside,” Garza said. “Both teams are really aggressive offensively. They’re just looking to attack. You definitely see similarities.”

Slowing down these two top offenses will be a challenge for both teams.

“If you want to keep teams out of the 100s, transition is the first thing you have to stop,” Connor McCaffery said. “There are games where I don’t think we’ve played well on offense and we scored 95. It comes from playing fast and having a good game plan. If we can slow them down in transition, that will be key.”

On the Gonzaga side, Iowa is equipped with Wieskamp, C.J. Fredrick, and Jordan Bohannon as sharpshooters on the perimeter, but the game plan all comes down to attempting to defend Garza.

In the past, opposing teams have stuck as many as five players in the paint in an effort to slow the center down, or they attack him with varying double teams and try to get the ball out of his hands.

Even with that attention, whether it’s in the paint or on the perimeter, Garza, a senior, has scored at will for most of the past two seasons.

“It’s great for college basketball that he came back,” Few said. “He’s having an extraordinary type of year so far with the numbers he’s posting, where he’s scoring. The last couple games he’s been pickin’ and poppin’ threes. And those things looked automatic.”

So far this season, the Hawkeyes defeated No. 16 North Carolina by 13 points at Carver-Hawkeye Arena in the ACC/Big Ten Challenge, and have blown every other team they have played out by more than 20 points.

Iowa’s players believe the team is among the elites in college basketball this season.

Saturday’s game isn’t a win-or-go-home game, and it isn’t even a conference game. But it’s an opportunity for the Hawkeyes to make a statement that they are a top-tier team in college basketball, that Iowa is in the same class as a team like Gonzaga.

On Bohannon’s “The Standpoint” podcast episode released this week, the show’s guest and former Duke basketball player and current ESPN analyst Jay Bilas said, with no hesitation, that Iowa is a Final Four-caliber team. Gonzaga has been that for most of the last decade.

Saturday’s matchup is a March Madness preview in December. And the No. 1 spot in the country is on the line.

“They have the same goals and plans that we have,” Bohannon said. “So there’s a lot of similarities between the both of us. I think it’s definitely going to be a sneak peek of what a Final Four, National Championship game could like like between us two. Hopefully we play up to our potential.

“At the end of the day we think we’re the best team in the country. And we want to go out there and show it.” 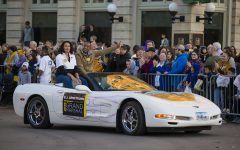 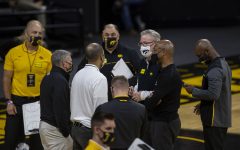 Hawkeye history: Looking back at the Iowa men's basketball team's previous matchups with No. 1 teams 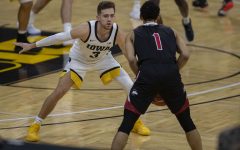