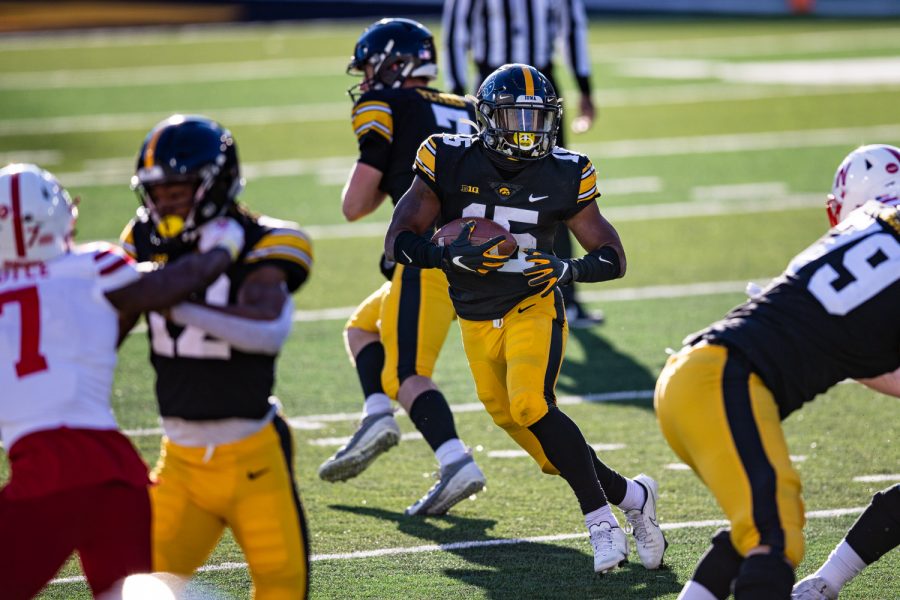 Iowa running back Tyler Goodson carries the ball during a football game between Iowa and Nebraska at Kinnick Stadium on Friday, Nov. 27, 2020. The Hawkeyes defeated the Cornhuskers, 26-20.

Iowa’s backfield has dual weapons of speed and strength in the form of the team’s two dynamic running backs.

It’s a relationship of balance.

Tyler Goodson and Mekhi Sargent are a productive running back combination for Iowa again this season.

Goodson is the shifty speed back, Sargent provides the power.

It’s something that Maurice Goodson, Tyler’s father, has seen.

“They’re jelling and meshing together to become a strong unit,” Maurice said. “They have strong chemistry and camaraderie. They’re one unit.

“They’re one band, one sound, and they’re after the same goal.”

Goodson and Sargent have complemented each other exquisitely in the Hawkeye backfield this season. Although Goodson has more than twice as many carries as Sargent this year, Sargent has one more touchdown.

“We’re like a one-two punch,” Goodson said. “Mekhi, he’s a great runner, he’s very smart, he has a lot of power to him. He’s tremendously strong and I think that puts fear in teams and individual defenders coming down and trying to fit the run. When I go in there, if I can lower my shoulder I will. But knowing that Mekhi has put that fear into a defender allows me to know that defender’s not going to come as hard if I have a chance to break the run.”

While Goodson is the primary back in most situations, in the red zone, Sargent shines. Thirteen of Sargent’s 63 rushes have come inside of the opponent’s 20 yard-line and seven of those runs have resulted in touchdowns.

In Iowa’s game against Nebraska on Nov. 27, after Sargent scored on a 2-yard run, Hawkeye radio broadcaster Ed Podolak called Sargent a “tremendous player inside the 10-yard line.”

It took some time for the Hawkeyes to start running the ball effectively enough to win games, though.

Before the season began, much of the conversation around Iowa was about new starting quarterback Spencer Petras and how he would fare in his first season as the starter. When the season started, he had the ball in his hands a lot, throwing the ball maybe a little more than Iowa fans expected.

But the emergence of a solid, reliable running game has helped the Hawkeyes to a current five-game winning streak and vaulted them into the national rankings, sitting at No. 16 in the latest College Football Playoff rankings.

In those two games, Goodson and Sargent only carried the ball 44 times combined.

After the Northwestern game, in which Petras threw 50 passes and Iowa only attempted 23 rushes — 17 of those by either Goodson or Sargent — head coach Kirk Ferentz stressed the need for more balance on offense.

“If you look historically at those kinds of numbers, it means the outcome wasn’t good,” Ferentz said in his post-game press conference after the loss to Northwestern. “We don’t want to play that way. [We’re] looking for a lot more balance than that.”

And beginning with the 49-7 win over Michigan State, the start of Iowa’s current five-game winning streak, the Hawkeyes did what Ferentz wanted — played with a more balanced offense.

Petras attempted 27 passes, and Goodson and Sargent combined for 23 rushing attempts—Ivory Kelly-Martin got in on the ground game too, among others — as Iowa rushed a total of 40 times.

It was the first time any Iowa rusher had more than 100 rushing yards this season, as Goodson finished with 113 on the day, averaging more than eight yards per carry.

Iowa ran the ball more than it passed in the next four games, leading to more scoring and easier completions for Petras in the passing game.

“[The running game] opens up the naked game, it opens up the play-action game, it’s huge,” Petras said after Iowa’s 41-21 win over Penn State in Week 5. “It slows the [pass] rush down, makes the linebackers late into their drops if they’re in zone coverage, so it’s very important. Helps our rhythm offensively, so it’s huge.”

In the process of finding offensive balance, the running back duo of Goodson and Sargent has become one of the most productive tandems in the conference, and in the country.

Goodson is second in the Big Ten in rushing yards (656), and Sargent is eight (381). Sargent is third in the conference in rushing touchdowns (seven), and Goodson is fourth (six).

Goodson came to Iowa in 2019 as a three-star recruit with offers from more than 10 Power 5 schools, including Big Ten teams Indiana, Michigan State, and Nebraska. Goodson, who was named the Gatorade Georgia Player of the Year as a high school senior, took over the starting role for Iowa’s last three regular-season games last season as well as the Hawkeyes’ bowl win over USC.

The sophomore has taken over the lead-back responsibilities for Iowa, taking handoffs, catching check-down passes from Petras on occasion, and even running the offense from time to time.

Goodson has taken some direct snaps out of the wildcat formation this season, although he has yet to throw a pass this year. Against Illinois, on one series, Goodson took five straight direct snaps.

Sargent, a senior, took a different path to the Hawkeye backfield.

After graduating from Key West High School, Sargent went to Iowa Western Community College, where he redshirted his first year, then put up 1,449 rushing yards and 14 touchdowns on the ground in 10 games. Sargent averaged over seven yards a run. Sargent was named NJCAA offensive co-Most Valuable Player, and then arrived at Iowa ahead of the 2018 season.

Sargent took the same path to the starting job at Iowa as Goodson did, except a year earlier.

Sargent backed up Ivory Kelly-Martin and Toren Young for the majority of 2018 but worked his way into the starting role in that season’s final four games. A starting job Sargent would keep until Goodson came along.

Even when the team wasn’t finding success early in 2020, Goodson and Sargent each found the end zone in one of the Hawkeyes’ losses. Sargent ran for a touchdown in the season-opener against Purdue, and Goodson scored on Northwestern the following week.

In the red zone, Sargent credits the team’s blocking ability for the rushing success. Last season, Goodson and Sargent only combined for nine rushing touchdowns all season.

“Just our willpower,” Sargent said while meeting with the media on Dec. 1. “It starts upfront with the O-line, I give credit to those guys. O-line, fullbacks, tight ends, wide receivers, everybody is doing their job outside of the running back position. After that, it’s us versus whoever’s up. It’s the willpower to do so.”

The rushing attack was on full display for the Hawkeyes in the win over Michigan State. Both Goodson and Sargent scored two touchdowns and ran for a combined 144 yards.

“It’s all about having a fresh mentality going into each and every week that we’ll be able to be successful in the run game,” Goodson said in his post-game press conference. “That’s just gotta be my mentality, the offensive line’s mentality, everybody that’s in the football game.”

Offensive lineman Cole Banwart said he views each running play as an opportunity for the linemen to prove themselves.

“Every time we get a run call, we kind of take that on our shoulders, thinking we’re doing things right,” Banwart said. “We’re trying to push forward because the more runs we get the better we’re looking and the more time we have the ball in our hands, the better off we’ll be.”

Against Penn State, one of Sargent’s two two-touchdown performances, he outgained Goodson on the ground 101 to 78.

Ferentz said the running back room as a whole has been supportive of each other, adding to their on-field success.

“It’s a great room,” Ferentz said. “[Running backs coach] Derrick Foster does a great job coaching those guys first and foremost. The whole group is just a very good group, they’re very unselfish, they pull for each other. The guys are just really positive, they work with each other, they help each other. That’s what you hope your whole football team does. If anybody wants to model their behavior, that’s really a good thing for our football team.”

Kelly-Martin is focused on leading the younger guys and showing them how to be successful as Hawkeyes.

“I’m just trying to make myself as useful as I can on the field,” Kelly-Martin said earlier this season. “I’m trying to do as much as I can off the field as well, whether that’s leadership, making sure I’m leading by example.”

Last season, Foster described Kelly-Martin as an extra assistant coach in the backfield and commended his attitude for redshirting for most of 2019.

Both Sargent and Kelly-Martin are upperclassmen and have helped Goodson along, as the sophomore has more of a workload than in his freshman year.

Goodson’s father Maurice, who has been instrumental in his son’s development as a football player, said that the relationship between his son and Sargent is ‘awesome.’

Goodson and his counterpart in the backfield are leading Iowa’s offense during the team’s five-game winning streak.

And they’re doing it together.

“Tyler is a great athlete,” Sargent said. “He comes in, works hard, and competes. He just makes the whole running back room better because all of us are striving to be great. He’s very smart and he’s very competitive.

“Throughout the course of [Tyler’s] time here, we’ve done a good job of coaching each other up, it’s not going to always come from Coach Foster. I feel like us being out there as athletes and players, it’s important for us to tell each other what we see or if Tyler’s in getting a rep, I’m going to tell him what I saw as opposed to what he saw if the play goes wrong. That way, we just help each other and progress into the next play. That’s been the strategy and I feel like it’s been a really great one.” 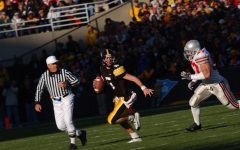 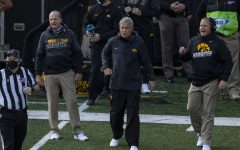 Around the Big Ten Week 8: Where to watch the Iowa-Wisconsin football game. 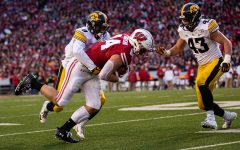