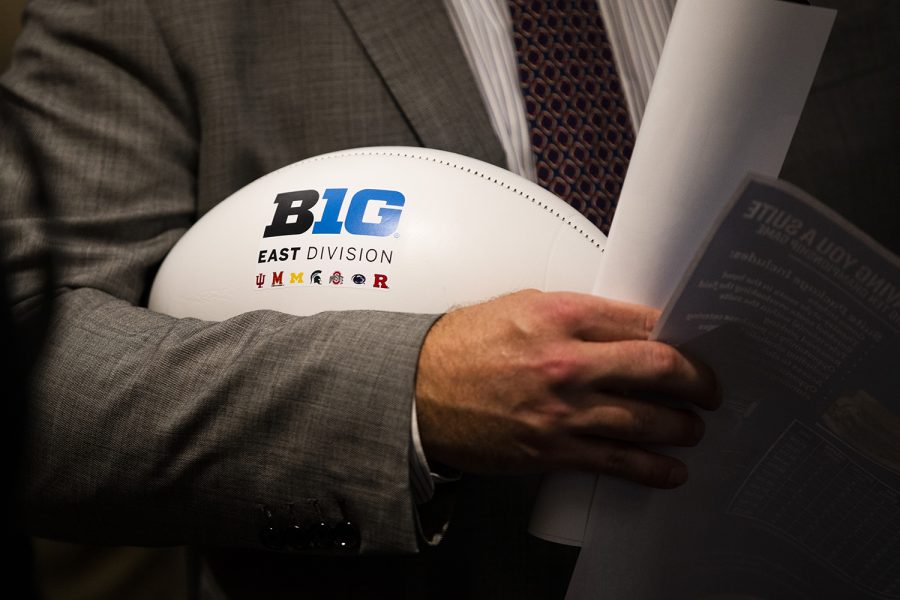 A football is seen during the second day of Big Ten Football Media Days in Chicago, Ill., on Friday, July 19, 2019.

Point/Counterpoint: What team is the Big Ten’s second-best?

RELATED: Point/Counterpoint: Which Hawkeye is due for a breakout season in 2020?

When the Penn State Nittany Lions fell to the Indianan Hoosiers on Saturday afternoon, the team I believed to be the Big Ten Conference’s second-best got knocked down a peg.

For a team playing a limited, nine-game season aiming for a College Football Playoff berth, the Nittany Lions’ loss to Indiana was embarrassing and disappointing.

After Ohio State wiped the floor with Nebraska, their status as the Big Ten’s best team was cemented. So, the question remains, what team is second best in the Big Ten with Penn State losing that denomination?

To me, Michigan is the clear choice.

This year’s shortened Big Ten season is the epitome of a race to the finish line, and every game matters — that’s why Wisconsin can’t be the Big Ten’s second-best team. Graham Mertz’s positive COVID-19 test sidelines him for at least three games, per conference protocol.

With Jack Coan out due to injury and third-string quarterback Chase Wolf also testing positive for COVID-19, the Badgers will be turning to their fourth-string QB Danny Vanden Boom. While Mertz is out, Wisconsin will have to defeat two of the Big Ten’s most surprising teams in a three-week stretch — Purdue and Michigan. I don’t think Vanden Boom will be good enough to keep the Badgers afloat while he is at the helm.

So, with Wisconsin seemingly out of the picture, Michigan is the emergent team poised to be the Big Ten’s second best.

In a trophy game for the Little Brown Jug against a ranked Minnesota team on Saturday, Michigan rolled past the Golden Gophers, 49-24. The Wolverines’ breakout performance can be attributed to the efforts of quarterback Joe Milton. Milton threw for 225 yards and a touchdown, and ran for an additional 52 yards and one score.

When it seemed like the rest of the Big Ten faltered over the weekend, Michigan rose to the occasion, and that’s why it’s time to start believing in the Wolverines.

Although Wisconsin opened its season with a win against a lowly Illinois squad, the Badgers showed they have the tools to compete with the best in the Big Ten Conference.

Freshman Graham Mertz put on a show against the Illini, throwing for 248 yards and five touchdowns on 20-21 passing. It was the kind of debut that builds confidence for a freshman, and Mertz could end up being the catalyst that turns Wisconsin into a top-tier team this year. And while Mertz did test positive for COVID-19 Sunday, he will only be unavailable for three games, at most.

The Badgers shared the wealth on the ground too. Three players rushed for 30 yards or more as Wisconsin gashed Illinois for 182 yards on the ground.

Despite a solid rushing attack, Wisconsin’s offense could look different this season than it has in years past. Mertz’s performance showed that the Badgers could lean on a more pass-heavy approach going forward, adding an interesting wrinkle to a normally benign Wisconsin offense.

The Badgers also looked good defensively on Friday night, holding the Fighting Illini to just over 200 yards of total offense.

The Badgers will play Michigan and Indiana for their crossover games — which may prove tougher than pundits originally predicted.

However, after Iowa and Minnesota both started the season in disappointing fashion, it appears the Badgers could stroll to a Big Ten West title, and a rematch with the Ohio State Buckeyes in the Big Ten Championship Game in Indianapolis, Indiana, in December.