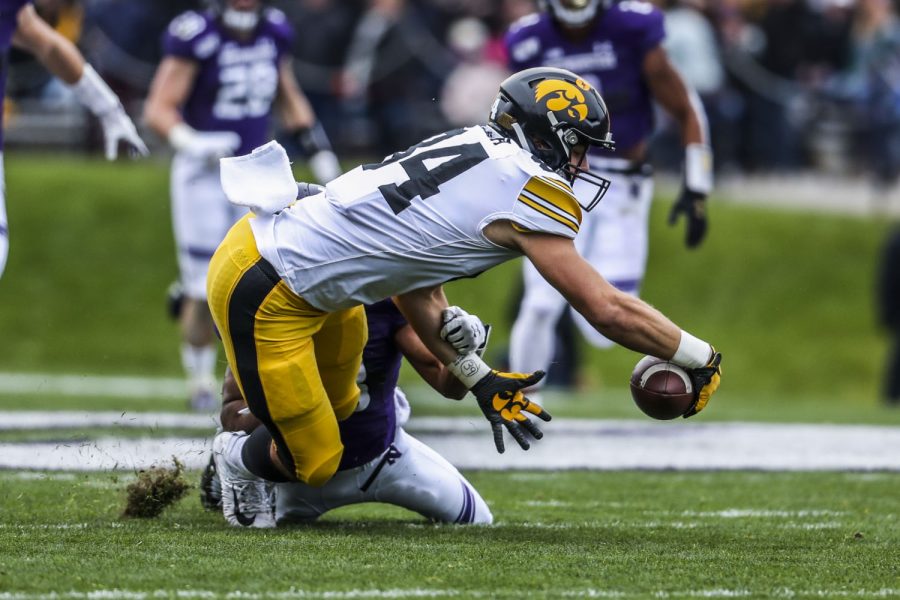 Iowa tight end Sam LaPorta dives after losing his grip on the ball during the Iowa vs. Northwestern football game at Ryan Field on Saturday, October 26, 2019. The Hawkeyes defeated the Wildcats 20-0. The pass was later ruled incomplete.

Point/Counterpoint: Which Hawkeye is due for a breakout season in 2020?

Two DI staffers debate which Hawkeye will become a breakout star in 2020.

A native of Highland, Illinois, Sam LaPorta not only looks the part of Iowa football’s next great tight end, he is the Hawkeyes’ heir to the tight-end throne.

LaPorta is listed at 6 feet, 4 inches tall and 249 pounds — not dissimilar to Iowa tight ends past.

Physical prowess aside, LaPorta also proved he is more than capable of contributing on the field. He was one of just eight true freshmen to take the field for Iowa in 2019. He participated in 12 of Iowa’s 13 games, missing one due to injury.

While LaPorta only corralled 15 passes for 188 yards in total last season, a late-season surge seems to suggest that bigger things truly are coming in 2020.

LaPorta remarkably earned two starts, despite being listed behind veterans Nate Wieting and Shaun Beyer on the depth chart.

At Northwestern’s Ryan Field on Oct. 26, LaPorta caught two passes, one of which was good for 41 yards. Against Nebraska on Nov. 29, LaPorta’s late 22-yard connection with now-alum quarterback Nate Stanley set kicker Keith Duncan up for a game-winning field goal.

Most impressively, LaPorta’s best performance of the year came on the biggest stage the Hawkeyes played on in 2019. LaPorta hauled in six passes for 44 yards in Iowa’s 49-24 route of the University of Southern California in the Holiday Bowl.

LaPorta was named to the John Mackey Award preseason Watch List ahead of his upcoming 2020 campaign.

Drawing the interest of Nick Saban and the Alabama Crimson Tide is a pretty good sign for a college football prospect.

That’s what defensive tackle Daviyon Nixon did in his lone year dominating at Iowa Western. But the three-star recruit stuck with the Hawkeyes, the school he committed to out of high school, however he could not play immediately because of his grades.

Nixon took a redshirt year at Iowa in 2018. The Kenosha, Wisconsin, native was a key rotational player on the Hawkeye defensive line in 2019. Heading into his junior season, Nixon is set for a breakout year.

Iowa lost both of its starting defensive tackles from last season after Cedrick Lattimore and Brady Reiff graduated. Nixon, senior Austin Schulte, and graduate transfer Jack Heflin are expected to take the majority of snaps on the interior of Iowa’s defensive line in 2020.

Despite being 6 feet, 3 inches and 305 pounds, Nixon is very explosive off the line of scrimmage. He’s capable of using a quick burst to blow by an opposing offensive lineman, or use his strength to set up a good bull rush.

Nixon appeared in all of Iowa’s 13 games last season and compiled three sacks and 5.5 tackles for loss. In Iowa’s shutout victory over Northwestern, Nixon dominated and tallied two sacks.

Defensive tackle should be a position of strength for the Hawkeyes in 2020, even with the key losses from last season, and especially with the addition of Heflin — Northern Illinois’ defensive player of the year in 2019. But a breakout season from Nixon will be the highlight from this positional group throughout the upcoming season.

Nixon is a potential star, and with an increased workload this season, he could remove “potential” from that description.