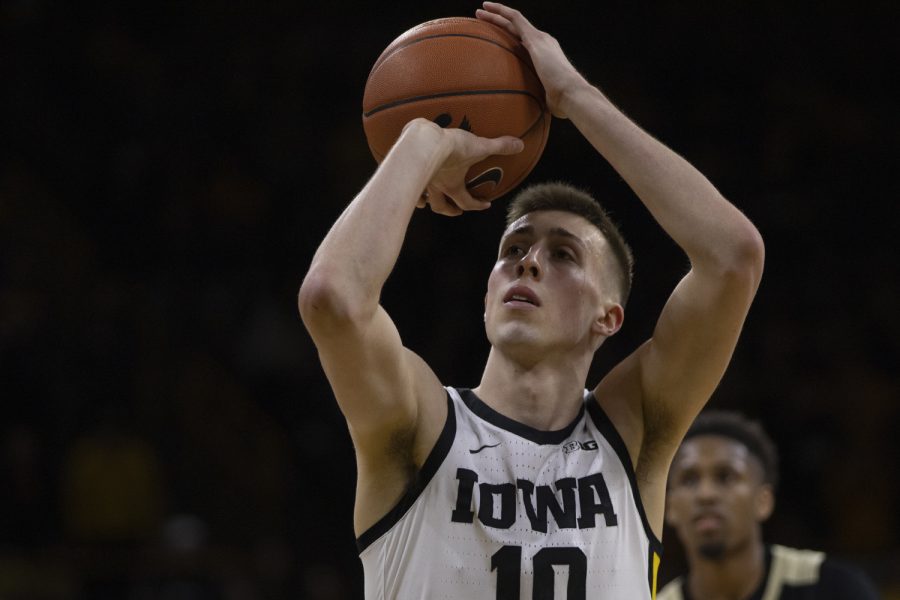 Iowa guard Joe Wieskamp prepares for a free throw during a men’s basketball game between Iowa and Purdue at Carver Hawkeye Arena on Tuesday, March 3, 2020. The Hawkeyes were defeated by the Boilermakers, 77-68.

Point/Counterpoint: Who will be Iowa basketball’s second scoring option in 2020?

Luka Garza is going to be Iowa’s top scorer this season. Duh. As for who comes in at No. 2? There are several good candidates.

Jordan Bohannon is as healthy as he’s been in years and going into last season, Joe Wieskamp was thought to be the top scoring option for Iowa, before Garza displayed game after game that he is the best player in men’s college basketball.

But I’m going with C.J. Fredrick.

As a redshirt freshman last season, the Cincinnati, Ohio, native ranked third on the team with 10.2 points per game, but led the Big Ten with a 46.2 3-point field goal percentage.

Fredrick did miss six full games with injuries, and in July had a surgery on his right foot. A fully healthy Fredrick should see an even greater workload this season.

In his first season of playing time with the Hawkeyes, Fredrick attempted only 7.2 shots per game. Even with the incredible depth Iowa has this season, I’d expect that number to be closer to double-digits.

Opposing teams are going to defend Garza with multiple players, which should benefit Iowa’s trio of sharpshooters. Wieskamp is still the priority on the perimeter for opposing teams, which should leave Fredrick with a good number of uncontested shots.

This isn’t necessarily good for my argument, but Fredrick, Bohannon, and Wieskamp are all solid choices here. The fact that there are so many options in this category speaks to how fun this Hawkeye team will be to watch.

But again, I’ll say Fredrick. This quote from last season continues to stay with me.

“It’s going to be a pain in the ass to see [Fredrick] the next four years,” Illinois coach Brad Underwood said last season.

Considered a contender for multiple national player of the year honors, there should be no doubt that Luka Garza will be Iowa men’s basketball’s leading scorer this year.

So, the question remains, who will be the Robin to Garza’s Batman?

The answer is simple — the same guy that proved to be an excellent second scoring option to Garza in 2020.

Forward Joe Wieskamp was one of just three Hawkeyes that produced a double-digit points per game figure in 2020. C.J. Fredrick managed 10.2 points per game, while Garza recorded 23.9.

Wieskamp remarkably averaged 14 points per game in what amounted to be a poor shooting season for him from beyond the arc. Wieskamp made just 34.7 percent of his three-point attempts in 2019-20 after draining 42.4 percent of such attempts in 2018-19.

In 2020-21, Wieskamp will likely see less attention from opposing defenses as scoring threats like Jordan Bohannon, Jack Nunge, and Patrick McCaffery will all be returning from their respective 2019 redshirt seasons.

Last year, Wieskamp was Iowa’s only legitimate scoring threat outside of Garza — especially while Frederick was sidelined for six games with injuries.

Now, with more options to spread the ball around to, Iowa’s offense should provide more easy buckets for a talented scorer like Wieskamp.

The Muscatine, Iowa, native is actually flying under the radar somewhat coming into this season as most of the preseason storylines surrounding the Iowa basketball team pertain to players coming back from injury and Garza’s return to school for his senior season.

Without the weight of individual expectations and extra defenders on his shoulders, I expect Wieskamp to be the Hawkeyes’ second-highest scorer in 2020.