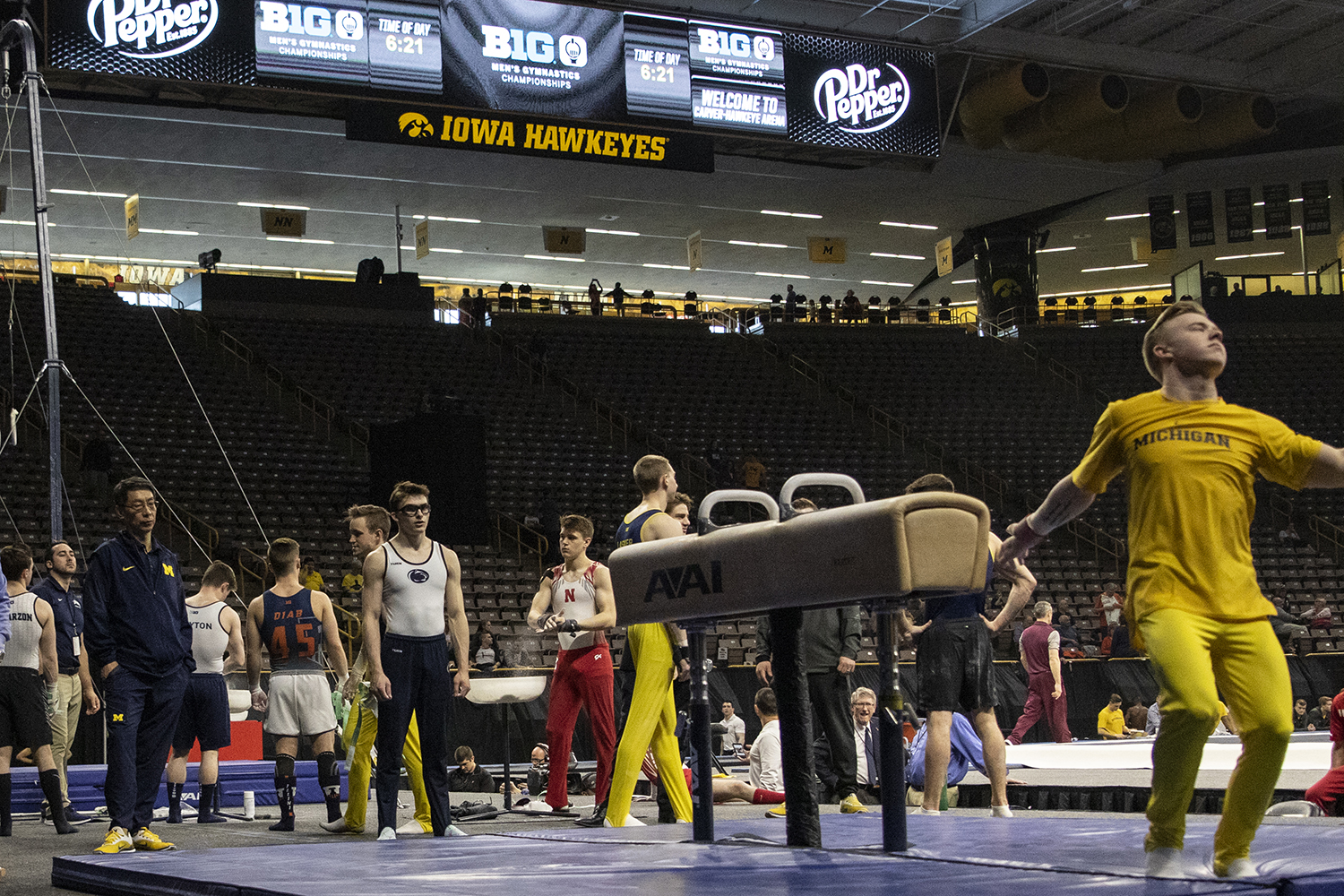 Athletes warm up during day two of the Big Ten Men’s Gymnastics Championships in Carver-Hawkeye Arena on April 6, 2019. Gymnasts competed in individual competitions.

There will be 12 NCAA men’s gymnastics teams after the 2020-21 academic year, prompting alternative solutions from those who care about the sport.

It is no secret that NCAA men’s gymnastics has been struggling for a long time, but the struggle for its existence is now more real than ever.

Looking beyond the 2020-21 academic year, there will be only 12 teams, with Iowa, William & Mary, and Minnesota all discontinuing their programs because of financial struggles caused by the pandemic.

Despite the feeling of shock and disappointment after Iowa cut its program, there’s hope from coaches and athletes that club teams will be the way of the future at the collegiate level, ensuring the Olympic dream is kept alive.

Iowa was the first domino to fall. Its announcement came on Aug. 21. The week after that decision, all the Big Ten head coaches in the sport joined in on a conference call and expressed fear about their own teams getting the axe, Iowa head men’s gymnastics coach JD Reive said.

“I really hope that they survive it through this next year,” Reive said regarding NCAA men’s gymnastics. “But right now, I’m not obviously in a whole optimistic period. I don’t know how much longer we have. I think it’s only going to be a couple years if we make it through this year.”

Two days after knee replacement surgery, Minnesota men’s gymnastics head coach Mike Burns was being interviewed by The Daily Iowan, which was before he found out his sport was being discontinued at his own institution on Sept. 10.

After returning from a call with his school’s administration, Burns found out during a meeting with the College Gymnastics Association Executive Committee on Aug. 21 that the men’s gymnastics team at Iowa was being cut.

“I was like, ‘You gotta be kidding me,” said Burns, who was an assistant coach at Iowa from 1980-91. “Obviously, [it] hijacked our agenda for the meeting and kind of put us on pretty high alert.”

Burns is the president of the College Gymnastics Association whose mission statement is “To raise the profile of the sport of NCAA Men’s Gymnastics by setting the standard for collegiate sports organizations and providing additional opportunities at the college level.”

His association is trying to keep NCAA gymnastics alive, but that’s becoming difficult with no revenue coming into many collegiate athletic departments.

On Sept. 14, the College Gymnastics Association released a post about its “STRONGER TOGETHER CAMPAIGN,” described as a nationwide fundraising program to help college men’s gymnastics survive.

Only hours after Minnesota announced its own men’s gymnastics program was being cut, Burns said in his second interview with The Daily Iowan that it’s up to each team to help themselves out to a certain extent.

“There’s probably two priorities,” Burns said in his first of two interviews. “Money is one and the philosophy of providing for student-athletes at the collegiate is the second one. I think that aspect of college sports is really a critical one.

“There’s an awful lot of student-athletes at the college level that don’t get the notoriety or publicity, maybe because they are doing a lot of great things and then they’re moving on to great careers outside of the sport,” Burns said. “I think any way you can salvage and save those opportunities I think you need to take a look at that really closely.”

The complicated scoring in men’s gymnastics is also of concern because it makes it hard for TV viewers to follow.

John Roethlisberger, a multiple-time NCAA champion and a three-time USA Olympian who now works as a TV commentator, said men’s gymnastics is the hardest sport to follow, understand, and tell who’s winning, even more so than women’s gymnastics. In 2018, the women’s finals of the U.S. Gymnastics Championships had over three times as many viewers as the men’s competition, according to Sports Business Daily.

Roethlisberger believes people want to know the score in real time and what needs to happen in the next turn for a team to take or retain the lead.

“As someone who’s been around gymnastics my whole entire life, I can watch a meet and don’t have any idea,” Roethlisberger said. “I’m guessing and I’m speculating, and I can come pretty close. But if it’s hard for me, how about just the layman who watches gymnastics once every four years? They’re not going to know.”

The meets also take too long, Roethlisberger said. He said he would shorten all events to three-up, three-count. This means that three people from each team would go up for each event and all their scores would count for the meet.

Roethlisberger would also make changes to how the teams are structured.

He said he would downsize the gymnasts on teams to 12 and use a club program as the junior varsity program. Many programs have more than 20 on their roster.

“I honestly would go as far as cutting the entire budget, other than the coach and maybe three scholarships,” Roethlisberger said. “And then you fundraise all of your travel and all your uniforms and all your equipment. And maybe the university has discretionary income in a year.”

The athletic department then could help subsidize the program, Roethlisberger said.

Iowa’s athletics department said that a $20 million endowment to the men’s gymnastics program would generate an $800,000 operating budget, which would keep the program afloat.

If something isn’t done soon to save men’s gymnastics, the sport could change drastically in future years.

Jason Woodnick was named vice president for men’s gymnastics at USA Gymnastics in February. Complications from the pandemic have impacted his work.

He said USA Gymnastics and the USA Olympic Committee are proposing ideas to athletics departments across the nation on how to save the sport at their institutions.

“So if NCAA programs are gone, or are going, that changes our entire focus, our entire structure and where does that new pipeline come from and how we can develop it,” said Woodnick, who’s participated in many conversations about contingency plans should the current model fold.

He said USA Gymnastics just finalized its four-year plan, which he thinks will lead to international success.

“I believe that the programs will be there,” Woodnick said. “I believe that some of them may be in a different capacity than they’re in now, but I believe they’re going to be there and I still believe that we will have male gymnasts going to these programs and then making it to the National team and World Championships team and Olympic teams.

“I don’t see this as like the downfall of men’s gymnastics so that is not what I see here,” Woodnick said.

Some prominent figures in the world of gymnastics believe a transition from varsity-based NCAA programs to college-affiliated club teams is a major problem.

Roethlisberger contends that the effects of such a change would be felt at the 2028 Olympic Games.

Scott Barclay is one of the premier men’s gymnastics club coaches in the NCAA, having worked as the head coach of the Arizona State program since the school dropped it from the NCAA level in 1993. His program is one of nine gymACT programs, which makes it stand out from NAIGC programs because it has a coach, facility, funding, and the athletes, Barclay said.

Under his program, Arizona State is devoid of the typical benefits of an NCAA program except an ad hoc facility to host a meet.

In terms of the Olympics, Barclay said he thinks if more men’s gymnastics teams go to a club-level model that the USA Olympics team would lag for a couple quadrenniums.

“Like I say, I think whenever this stuff happens, somebody comes in and they take advantage of the opportunity to produce something and figure a way to do it,” Barclay said. “I mean, that’s the American way. So, even though I think we might lag for a little bit, I think we’ll come back.”

Reive said that he’s interested in starting a gymACT program at Iowa but doesn’t know yet if he’ll have funding for it. His wife owns Eyas Gymnastics, which is a community program for recreational and competitive gymnastics that operates out of the Iowa Field House.

Eyas Gymnastics was started, in part, as a contingency plan, Reive said. Should Iowa’s men’s gymnastics team ever fold, Eyas Gymnastics could serve as a safety valve for athletes to fall back on and utilize to train.

“The NCAA does create a significant amount of restrictions,” Reive said. “And with the limiting opportunities on our side, it was just compounding gymACT programs to have as many kids as you want. There’s ASU as an example but they’ve got 60 kids on their gymACT program. They’ve got two full squads. So, it’s pretty wild and would be exciting to have that here too.”

It’s clear that there will be some changes to collegiate men’s gymnastics within the next several years.

The College Gymnastics Association is trying to do virtual gymnastics meets, on which Burns said the group has made a lot of progress. The NCAA currently doesn’t allow virtual meets, according to a March 2004 interpretation that said an event must be held on the same day at the same place to satisfy the requirements for conference championship competition and/or sports sponsorship.

Under this format, teams would compete in their own facilities and livestream the meet on screens, and judges could judge from home. Burns gave an example of how much money Minnesota could save, such as how it might spend between $16,000 to $17,000 on a trip to Penn State.

Programs have been saved before. In 2002, Minnesota was going to cut men’s gymnastics, along with men’s and women’s golf before a fundraising program saved them, according to the Star Tribune. Michigan was going to discontinue men’s gymnastics in the ‘90s, but was postponed after intense lobbying from the team, coaches, and supporters, according to a 1994 article in the Michigan Daily.

Title IX, which prohibits discrimination based on sex in education activities that receive federal financial assistance, plays a role once athletics departments need a solution to overcome their budget deficits.

The NCAA website indicates there are no exclusions or exceptions allowed.

“Under Title IX there are no sport exclusions or exceptions. Individual participation opportunities (number of student-athletes participating rather than number of sports) in all men’s and women’s sports are counted in determining whether an institution meets Title IX participation standards.”

William & Mary’s interim Athletic Director Jeremy Martin said he welcomed unexplored and viable options for the seven sports the university will be cutting after this year, according to a Richmond Times-Dispatch article published Friday.

As for the NCAA Championship in men’s gymnastics, there’s no set minimum for how many NCAA teams there has to be for that to take place, Burns said. He said it could survive with the current 12 teams.

In an email to The Daily Iowan, Greg Johnson, Associate Director of Communications for the NCAA, said, “The National Collegiate Men’s Gymnastics Championships will continue as scheduled. If any additional details occur, we will share with our membership and the public.”

Barclay said that gymACT will likely be the future of men’s gymnastics if the NCAA doesn’t stand up.

Though it appears men’s gymnastics could soon look different in America, there is optimism from one of Iowa’s own.

“I have hope for the future of the sport that it will somehow grow,” redshirt freshman Reuven Anderson said. “Especially through those gymACT programs. I also really enjoyed my time competing and I hope we get to go again and if not I just really loved my experience competing for Iowa and my time being a Hawkeye.” 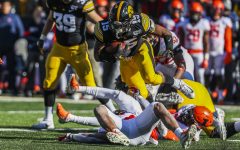 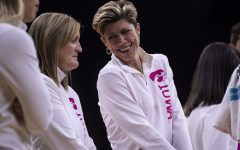 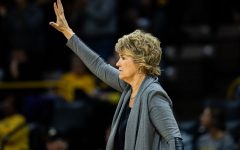