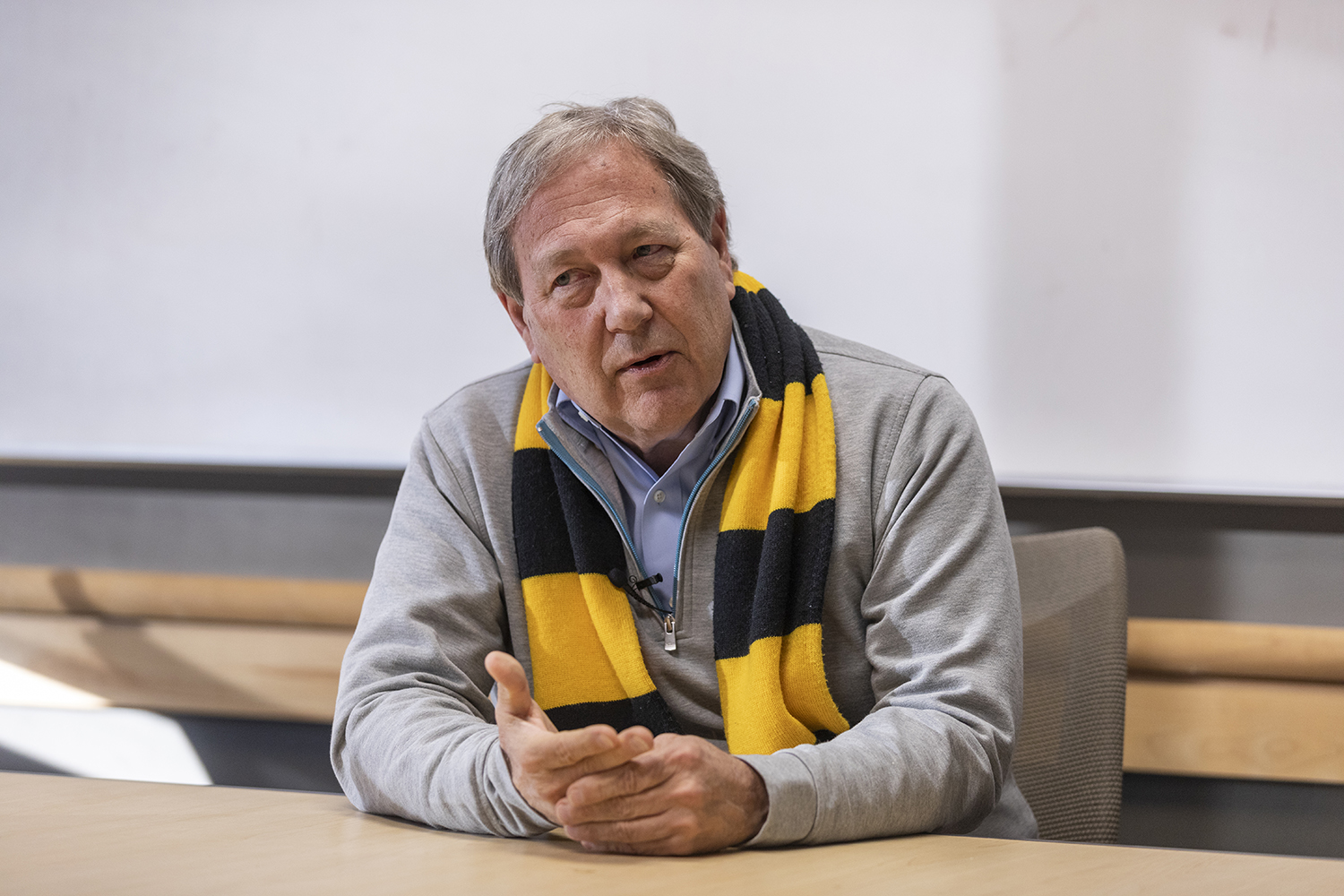 University of Iowa President Bruce Harreld talks with members of the Daily Iowan during an interview at the Adler Journalism Building on Thursday, Feb. 13, 2020. President Harreld has been the president at the university since November 2, 2015. (Ryan Adams)

University of Iowa President Bruce Harreld talks with members of the Daily Iowan during an interview at the Adler Journalism Building on Thursday, Feb. 13, 2020. President Harreld has been the president at the university since November 2, 2015.

The UI leader told The Daily Iowan he will retire when a new university president is found, though he expects the search to last at least one to two years.

Bruce Harreld has steered the University of Iowa campus through a pandemic, faced falling state appropriations, and brokered the institution’s first public-private partnership to bring in billions in revenue. He has faced backlash from even before his tenure, beginning with a widely condemned search process that brought him to campus in 2015, and continued through his handling of COVID-19 on campus.

Now, Harreld is at the beginning of the end of his time at the helm, announcing that he will retire once his successor is chosen.

The 21st UI president’s background as a businessman and the 2015 search that propelled him to this position came under fire from some campus community members who felt his non-academic background would make him unqualified for the position.

Harreld said he is hoping to give the state Board of Regents ample time to find the next president given the ongoing pandemic and financial strife on campus, creating a smoother transition than the one that brought him to Iowa City. Harreld told The Daily Iowan on Tuesday he expects the search for his successor to take nine to 18 months.

After leaving the UI, Harreld said he plans to retire and won’t be moving on to another job.

“I have commitments to family and other folks that I need to live up to while I still can. I’ll turn 70 later this year, so I’m at the twilight end,” he said. “I have some other personal commitments I need to live up to, but there’s not another job. I’m not going anyplace, and that’s part of the luxury of this, to do it this way.”

He said he began working with the regents during the summer to start finding a new campus leader, hoping to eliminate the need for naming an interim president after his retirement.

“Then COVID-19 came around,” Harreld said. “And I started talking to other people in the industry, saying ‘What’s happening with searches at the presidential level?’ And most people said it was taking a lot longer.”

He went on to say the pandemic could stretch the timeline of the regents’ search.

Said Harreld: “I think I started saying with the board, maybe we should just start sooner rather than later. Nothing’s changed, other than that COVID-19 may have changed the mobility in the market for presidential searches.”

Michael Richards, president of the Board of Regents — which governs Iowa’s three public universities — said the search for Harreld’s replacement will begin at a special regents meeting Oct. 5.

Richards told the DI that the regents did not ask Harreld to retire, and were somewhat caught off guard by his decision.

“It was a little bit of a surprise to us, in a heartfelt way,” Richards said. “He’s worked very hard and made a lot of significant changes at the university and improvements. I believe that he had been thinking about doing this, according to just talking with him, maybe next summer, but then he felt because of the COVID deal it might take a little longer than anticipated.”

In 2019, Harreld told the DI he wanted to keep the job beyond the end date outlined in his original contract, Nov. 2, 2020. Months later, the regents extended Harreld’s contract through the end of 2023.

Harreld receives an annual salary of $590,000, though he asked the regents in July to approve a temporary 50 percent pay cut in response to the pandemic-related financial challenges the UI faces.

Harreld said he will stay in his role as long as it takes to find a new leader — through the end of his contract in 2023 and longer if necessary — a decision that is ultimately up to the Board of Regents.

The regents appointed Harreld president in September 2015, nine months after previous President Sally Mason announced her intent to retire in January of that year. Harreld said there is not a “specific timeline” to find his own successor.

We can search the country, the world, for a great leader that fits us,” he said. “If that takes a little longer, we have the time.”

Harreld has faced protests this semester from students and faculty about reopening the university as local COVID-19 cases spiked. His retirement announcement also comes during a time of nationwide reckoning with systemic racism marked by a summer of Black Lives Matter demonstrations in Iowa City.

On the coronavirus front, those calling for the UI to move all classes online marched to Harreld’s residence in August. He did not appear while they chanted “Bruce, resign or go online” outside his home.

Harreld said his decision to announce his retirement now has nothing to do with current issues on campus.

“I think at the end of the day somebody will try to spin this and put some conspiracy behind it, but it’s just not the case,” he said.

Concerns over the head Hawkeye’s leadership have been prevalent among students and faculty since he first took the job in 2015.

In September that year, the DI reported that Harreld’s public forum after the regents announced his appointment was so contentious that shared governance organizations released a statement denouncing it.

“Many constituents were embarrassed by these comments and felt they were not characteristic of the UI community as a whole,” the statement said.

Some at the UI also said there were better people for the job. An informal 2015 survey conducted by the UI chapter of the American Association of University Professors found 1.8 percent of faculty and 2.8 percent of other respondents said they thought Harreld was qualified for the position.

Focus on diversity in the next search will be up to the established search committee, Richards said.

“It really depends, at least in part, on the applicants,” said the regents head. “I know the board will ask the search committee to make strong considerations for diversity, equity, and inclusion.”

Before coming to the UI, Harreld was a member of the faculty at Harvard Business School from 2008 to 2014. Most of his previous experience was in the corporate world, where he worked as an executive for Kraft Foods, Boston Market, and IBM.

The UI was added to the AAUP sanction list in 2016 for not following shared-governance practices during the presidential search, as reported by the DI at the time. The 21-member selection committee, which included some shared-governance members, was disbanded after the semifinalists for the position were announced.

Harreld said the conversation in the search for the next UI leader should start with the campus community. He told the DI on Tuesday he has confidence in the two leaders who will be named co-chairs of the presidential search committee.

“I think the first thing that needs to happen is the board needs to let the university run this process and define what they are looking for,” he said. “Now, the board should have input in that, that’s understandable. The first draft of that should be at the university level.”

Board of Regents Spokesperson Josh Lehman did not name the co-chairs, writing in an email to the DI that the names of all of the search committee members will be publicly announced at the same time.

Richards specified that although Harreld will remain president during the search process, he will not have input as to who is chosen as his replacement.

“I’ve had that discussion with him and he will not participate in any manner in the selection of the new president,” Richards said.

The required experience in higher education a university leader should have is expected to be a main conversation in the selection process, Harreld said. 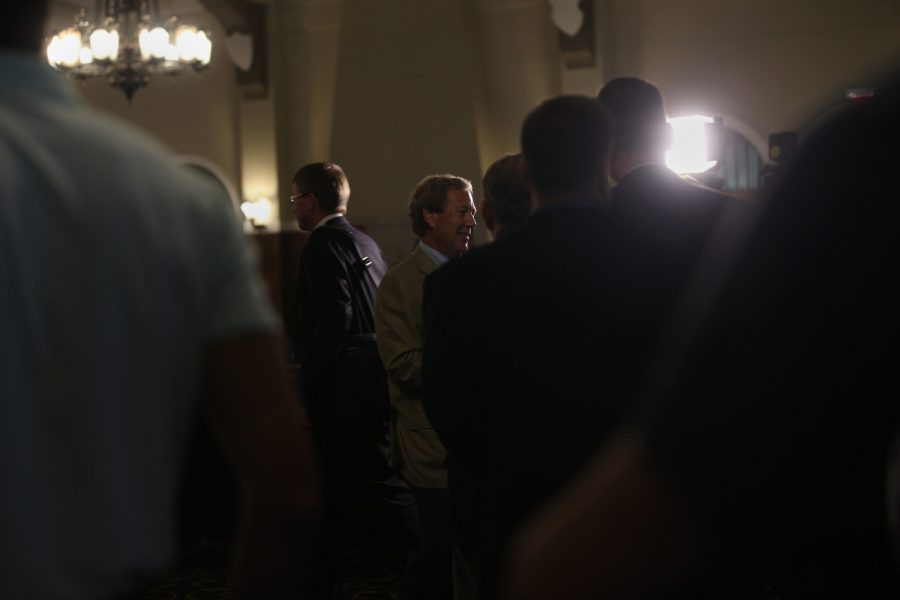 Gallery|24 Photos
Margaret Kispert
The newly appointed UI President Bruce Harreld talks to people of the community after a regents meeting in the IMU on Sept. 3, 2015. Harreld is the 21st president of the University of Iowa.

According to a study from the American Council on Education, 15 percent of university presidents in 2016 came from outside of academic backgrounds. In the face of declining state support, universities across the country have turned to those from non-academic and business backgrounds to lead in the new financial landscape.

“I think embedded in that will be a core issue that I certainly got embedded in,” Harreld said. “I think the country is still going through it, which is this issue of how much academic experience. Do you need to have a career that’s been dedicated in the academy, a career that’s moved back and forth, or something that’s totally different?”

Richards said it will be up to the selection committee to decide which candidates to consider, and what kind of backgrounds those candidates have.

Harreld’s tenure has been marked by continued disinvestment from the Iowa Legislature. The president called the state a “mediocre partner” in funding.

According to documents from the Iowa Legislative Services, tuition surpassed state appropriations as a funding source at the three regents’ institutions in 2011. Since then, the share of revenue coming from tuition has increased, and the share coming from the state has continued to decrease.

“We’re fighting a battle up against a number of institutions that are much better funded than we are and that takes a toll,” Harreld said. “Currently, the way we are operating right now is more expensive than it is normally.”

With shrinking support from the state, Harreld oversaw the UI’s pursuit to establish a public-private partnership in 2019 in an effort to bring in new revenue for the university.

The UI struck a deal with ENGIE, a French energy conglomerate, and investment firm Meridiam to run and maintain the UI’s facilities system. ENGIE paid $1.165 billion to the university as an upfront payment for the system, which was used to create a new endowment fund.

From that endowment, which is expected to grow to roughly $3 billion, the UI expects to allocate $15 million a year to support the strategic plan.

That deal is among the accomplishments Harreld touts from his tenure, though he told the DI that it is not up to him to determine what his legacy at the UI will be.

“I’ve dramatically improved relationships with the state and the Board of Regents, despite what I said about funding,” he said. “I think the billion-dollar P3, I think the change in the resource allocation process that puts a lot of that responsibility in the hands of the colleges rather than trying to do it at the top of the university centrally. I think that comes with another point which is we are a lot smarter today about how we allocate resources.”

Harreld also confirmed that current searches for other permanent UI leaders will continue.

Several high-ranking administrators have left the UI in the past year and have an interim in the position, including:

“That’s the other nice thing about this,” Harreld said of his long retirement process. “Everything will stay on track, nothing is going to be put on hold.”

Harreld said his announcement of his intent to retire now will allow for more stability at the university.

“I think we now have the luxury of not doing it in a rushed fashion and we can have a permanence of our strategic plan. We need to update it, we can continue that, and we don’t need to start from scratch,” the outgoing president said. “We can move it forward.”