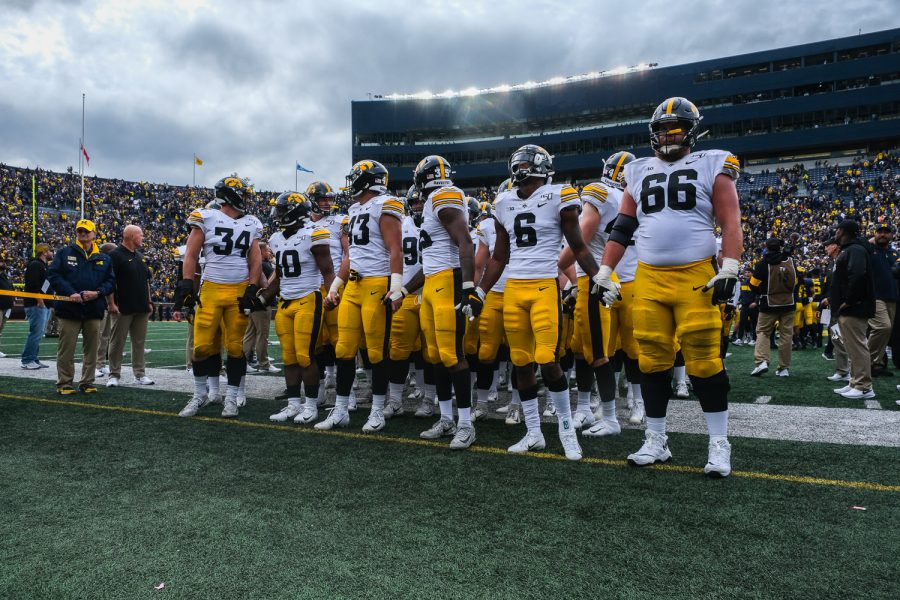 Iowa players prepare to leave the field following a football game between Iowa and Michigan at the Michigan Stadium in Ann Arbor, Michigan on Saturday, October 5, 2019. The Wolverines defeated the Hawkeyes 10-3.

Point/Counterpoint: What will Iowa’s record be this regular season?

The Iowa football team has an eight-game regular season schedule to play this fall. Two DI staffers debate how many of those games will be Hawkeye victories.

Iowa’s offense should be a lot of fun to watch this season.

A dynamic in Tyler Goodson, Brandon Smith , and Ihmir Smith-Marsette among the big-play receivers out wide, a potential breakout candidate in tight-end Sam LaPorta, and an experienced offensive line give Hawkeye fans reason to believe the team will give Keith Duncan plenty of opportunities to kick extra points in 2020.

But it all comes down to quarterback play.

Spencer Petras enters his first season as Iowa’s top quarterback after the departure of three-year starter Nate Stanley. Petras hasn’t had the opportunities to prepare this offseason that a first-year starter would typically have because of COVID-19.

“[It] dawned on me that this whole thing may favor teams with great genetics or experienced quarterbacks, and we don’t necessarily have either,” Ferentz said Sept. 17. “And really smart coaches.”

Ferentz has had high praise for Petras dating back to December, when he said the San Rafael, California, native looked like a quarterback who could start in the Big Ten. But I need to actually see him on the field before my expectations for Iowa get too high.

This team definitely has potential. The offense could be among the conference’s best, the defense is replacing several key pieces, but Chauncey Golston, Djimon Colbert, and Matt Hankins (among others) are still there to lead Phil Parker’s defense. And of course, Duncan has already cemented himself as one of the conference’s best kickers in recent memory.

At this point, despite empty stadiums practically nullifying any home-field advantage, I’d probably pick Iowa to lose back-to-back road contests at Minnesota (Nov. 14) and at Penn State (Nov. 21). The regular-season finale on Dec. 12 against Wisconsin is another game where I’d favor Iowa’s opponent.

These predictions could change, but I think the Hawkeyes come up short against three Big Ten teams that won 10 or more games last season, and all have experienced starting quarterbacks coming back.

In what will be a Big Ten football season unlike any other, predicting a team’s win-loss record a month before the season begins is certainly difficult.

So, after a great deal of consideration, I have decided that my official win-loss prediction for Iowa in 2020 is 7-1.

For the Hawkeyes, a potentially Rondale Moore-less Purdue team to open up the year should serve as an easy win. The same goes for the Hawkeyes’ second and third matchups against Northwestern and Michigan State at Kinnick Stadium.

Minnesota could pose a significant threat to Iowa on the road on Nov. 14. However, the status of the Gophers’ star receiver Rashod Bateman is still in question. It’s also unclear if Minnesota’s 11-2 record last season was an aberration or not. So, chalk this up as another victory for the Hawkeyes.

Nov. 21 will likely mark the Hawkeyes’ first and only loss of the regular season. Penn State has been the thorn in Iowa’s side for years. The Hawkeyes have dropped six-straight games to the Nittany Lions.

The following week, Iowa fans will get some reprieve as the Hawkeyes take on Nebraska. Recently, no matter how the games have gone, the Hawkeyes have always managed to top the Cornhuskers. Expect more of the same in 2020.

Iowa’s next opponent, Illinois, was also on the up-and-up last year, posting a 6-7 record and appearing in a bowl. That said, it’s unclear if the Illini will compete at a high level again in 2020 or if they will return to their recent subpar form.

Lastly, I anticipate that Iowa will cap off the regular season with a win at home against Wisconsin. The Badgers have to replace running back Johnathan Taylor this year. That should give Iowa a punchers’ chance to vanquish Wisconsin in 2020.