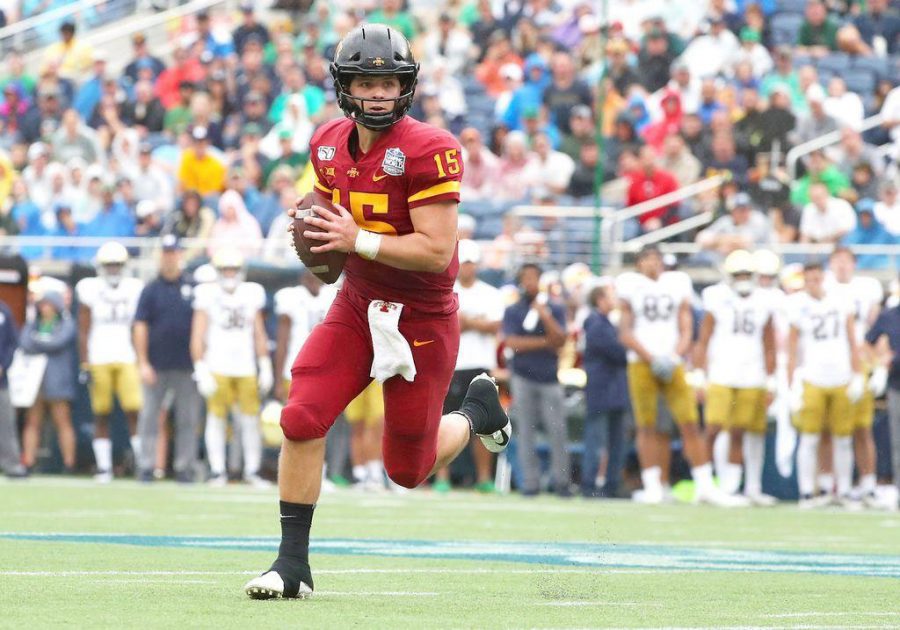 Iowa State Cyclones quarterback Brock Purdy (15) runs out of the pocket against the Notre Dame Fighting Irish during the first half at Camping World Stadium.

Point/Counterpoint: Can Iowa State bounce back?

The Cyclone football team faced high expectations coming into the 2020 season, but suffered an ugly loss to Louisiana to open its season.

Yes, Iowa State gave up two touchdowns on special teams. No, quarterback Brock Purdy did not play particularly well. The tackling by the Cyclone defense was at times, to put it lightly, quite poor.

The entire performance from Iowa State to open its 2020 season could most accurately be described as sloppy.

But is that really unexpected?

Over the last several years Iowa State has not performed well in season openers. And the past offseason has had unprecedented challenges. Schedules shifted, protocols changed, and for large parts of the summer the team likely wasn’t even sure it was going to take the field this fall.

Starting the season off smoothly was probably wishful thinking.

The team’s 31-14 loss at home to Louisiana is bad. It’s an embarrassing start to the season. But it does not mean the season is over.

I’m not saying Iowa State is the sleeper to win the Big 12, or to make national headlines, that some thought it was. I think the conference is still Oklahoma’s to lose, and I’d place considerable bets that the team isn’t in the College Football Playoff consideration at the end of the season. But I do think the Cyclones are a much better team than their performance on Saturday would indicate.

While he takes his fair share of jabs from Hawkeye fans, Purdy is one of the top quarterbacks in the Big 12. His poor performances against the Ragin’ Cajuns was full of inaccurate passes and questionable decision-making. That performance doesn’t have to linger, though.

The Cyclones have a nine-game conference schedule ahead of them (at least as of now). There are still plenty of opportunities to prove what the team can do.

Iowa State definitely can bounce back from its ugly loss. Will it? That remains to be seen.

No, Iowa State can’t bounce back after it’s embarrassing loss to Louisiana

College football is officially back as two of the Power Five conferences hit the gridiron over the weekend. Also returning last weekend was the Iowa State Cyclones’ inability to win a football game during the second weekend of September.

For the last five years, the Cyclones have made a tradition out of losing on the second Saturday in September, and they just renewed the ritual for the sixth straight year on Sept. 12. Although, this year the Cyclones were vanquished by the Louisiana Ragin’ Cajuns, not the Iowa Hawkeyes.

While the Ragin’ Cajuns did finish second in the Sun Belt Conference last year, they are still not considered to be in the same stratosphere as the Cyclones. So, Louisiana’s 31-14 victory over Iowa State came as a shock to many.

A team from outside of the Power Five conferences marched into Jack Trice Stadium and punished the 23rd-ranked Cyclones. For reference, the last time the Ragin’ Cajuns defeated an AP Top 25 team was in 1996 when they upset Texas A&M.

By the game’s end, the shock and devastation were evident throughout the Cyclones’ roster. Iowa State looked demoralized.

Some pundits predicted that starting quarterback Brock Purdy would be a dark horse candidate for The Heisman Trophy this season. Others speculated that Iowa State would finish the season ranked inside the top 10 in the country, perhaps even making a run at the College Football Playoff.

After one week of action, all that hype has ceased for the Cyclones after one of the most devastating losses of the 2020 college football season.