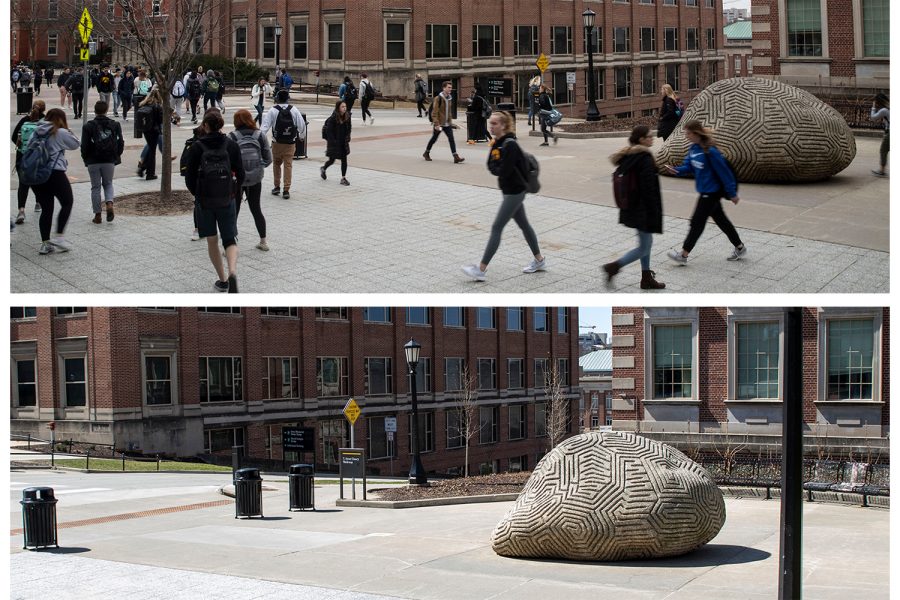 In this diptych, the T. Anne Clery Walkway is seen on March 11 and March 30, 2020. The first photo was taken on the last day of regularly scheduled classes and the second on the first day of online classes. Classes have been moved online for the remainder of the semester due to coronavirus .

Empty University of Iowa campus, Iowa City ‘eerie’ for those in town

As spring returns, Hawkeyes aren’t coming back with the new season, leaving the University of Iowa community to adjust to a quiet, less vibrant campus and city.

Seniors Adam Goedken and Kyle Apple strolled leisurely down the T. Anne Cleary walkway on the University of Iowa’s first Monday after spring break. The skies were a clear blue with few clouds in sight as the sun sparkled over the UI campus on March 30, warming Iowa City temperatures to around 60 degrees.

Normally, the annual return of warmth after a cold Midwest winter pushes many of the more than 30,000 enrolled Hawkeyes outside to embrace the spring weather. Students take turns on such days soaking up rays on the Pentacrest, lounging in hammocks tied to the trees or sprawled out on the grassy lawn to study.

This Monday afternoon, the UI campus structures stood largely void of people as students began the first day of online instruction for the remainder of the semester because of the UI’s steps to contain the spread of COVID-19.

“This is basically like my last walk around campus and then I’m probably moving back home,” said Goedken, of Independence, Iowa.

There was no crowd of pedestrians waiting to cross the streets that break up the walkway. Few Pentacrest loungers relaxed between classes at the heart of campus. No steady stream of students rushed into the Burge dining hall to fill up on food before heading to another class.

On a typical day with this weather, the Tippie College of Business students said they’d likely be outside — Apple added, “with the weather, probably Joe’s Place,” a bar on Iowa Avenue which features rooftop seating with a fireplace.

But the places across Iowa City and campus are only a fraction of what the two Hawkeyes were missing.

“The hardest part probably is not knowing when you’re going to get to say goodbye to your friends who are at home right now,” Apple said. “I’m staying on campus [to attend law school], so all my underclassman friends, I’ll see them again in the fall, but for my friends who are graduating and moving across the country for jobs, I don’t know if I’ll see them again for another couple of years, and that’s probably the hardest part.” 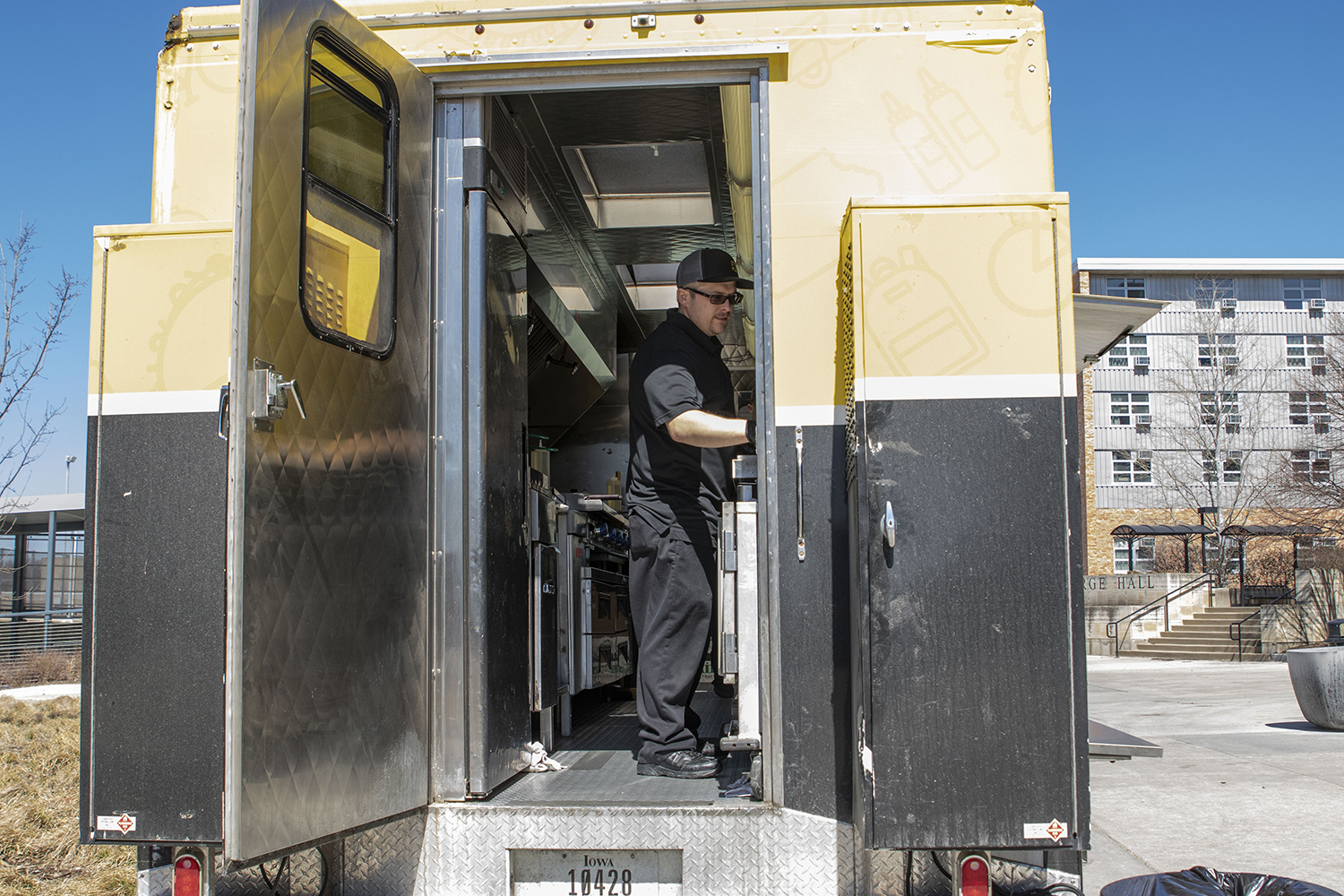 Street Hawk cook Ben Cremer works in the Street Hawk truck on Monday, March 30, 2020. Campus was empty as students began their first day of online classes. Cremer said they served not even 10 people that afternoon, when they’d typically serve between 200 and 300.

As the seniors absorbed the sights and silence of a mostly empty campus, Street Hawk cook Ben Cremer worked inside the UI’s food truck. The savory aroma of burgers, pulled pork sandwiches, and other items wafted between residence halls and buildings from its spot parked on the walkway.

By 1 p.m., Cremer said the truck had only served just over a handful of customers. It’d typically serve between 200 and 300 people on a given day. Its Monday through Friday operational hours are now 11 a.m.- 2 p.m., when the cooks would normally take orders until 3 p.m.

Rock music blared over the food truck’s speakers, as usual, but to a nonexistent crowd. Cremer said it’s eerie to see so few people out and about on a normally bustling campus, but he considered himself lucky to still have a job at this point.

“It makes the days drag a little bit,” he said of the campus atmosphere. “… Summers aren’t even like this.” 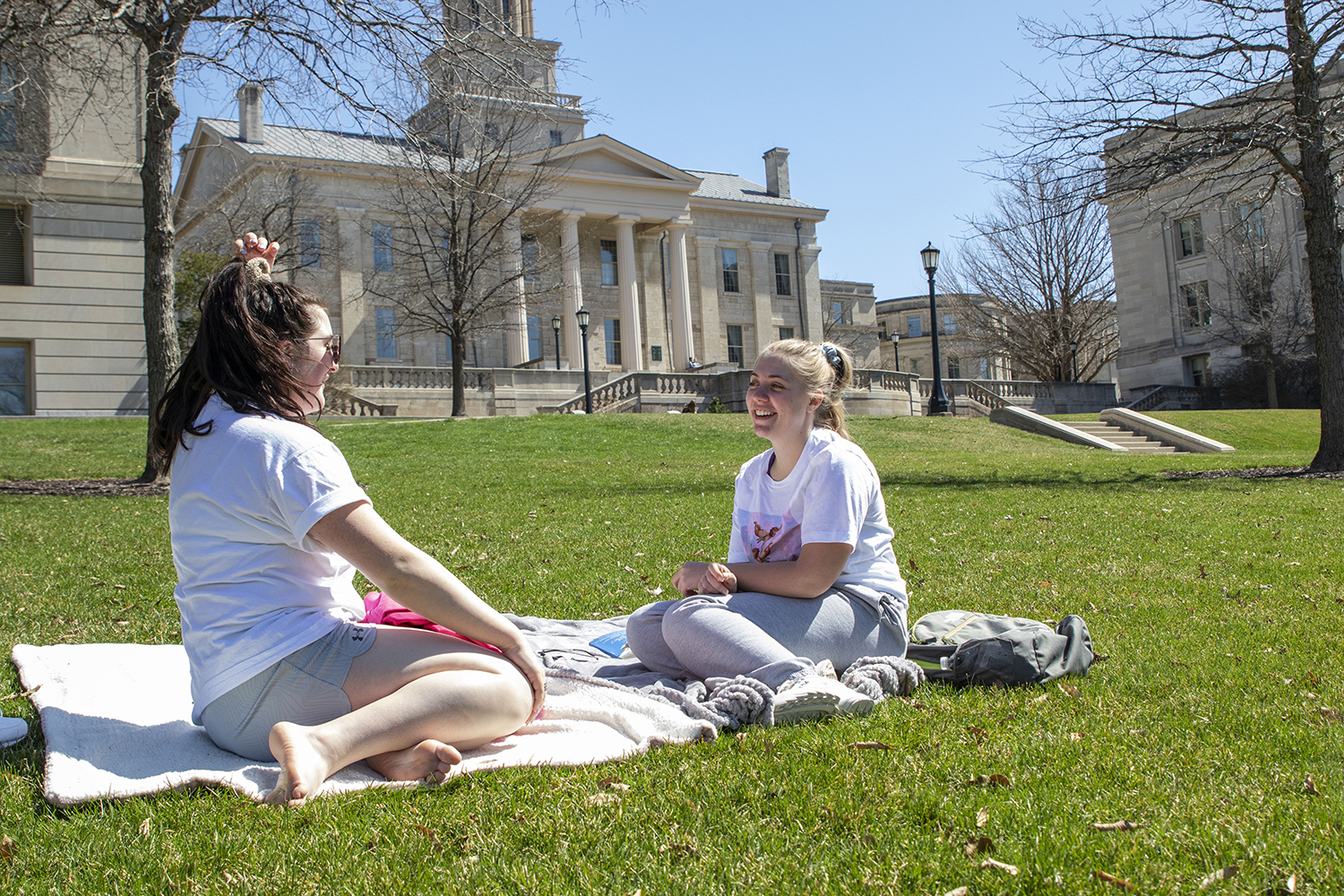 While Cremer waited for customers as he worked at the food truck, UI third-year students Bailey Fitzgibbon and Holly Dannen, communications majors from the Des Moines area, sat on the Pentacrest lawn on top of blankets — Fitzgibbon with Dunkin’ iced coffee and Dannen with a book, both with backpacks nearby.

Fitzgibbon would normally spend Mondays working at the IMU Java House location, while Dannen would typically be working on her online classes to free up her availability later in the week. The two roommates now found themselves with time to spare.

“It’s reassuring when you see a couple of people out walking just because I feel like every time I look outside, it’s barren — like, there’s no one out,” Fitzgibbon said of the normally vibrant campus falling dormant.

Many of their friends had returned to their respective homes and the two canceled their spring-break plans to travel to Portland, Oregon because of the risk associated with traveling as COVID-19 spreads across the U.S.

For Dannen, who’s graduating in May, the abrupt closures also meant the disappointment of a canceled commencement ceremony. The change also meant she had no opportunity to soak in the final moments of the last year of her undergraduate career while knowing those moments would be her last.

“I just had a lot of things that I didn’t think would be like the last time that I was doing them,” Dannen said. “I wish that I got to take those moments in more and appreciate them before they were gone, but it was just kind of randomly like, ‘Oh, now it’s over.’ And so I didn’t have time to be sentimental about graduating, I guess. It’ll all hit me at once, I’m sure.” 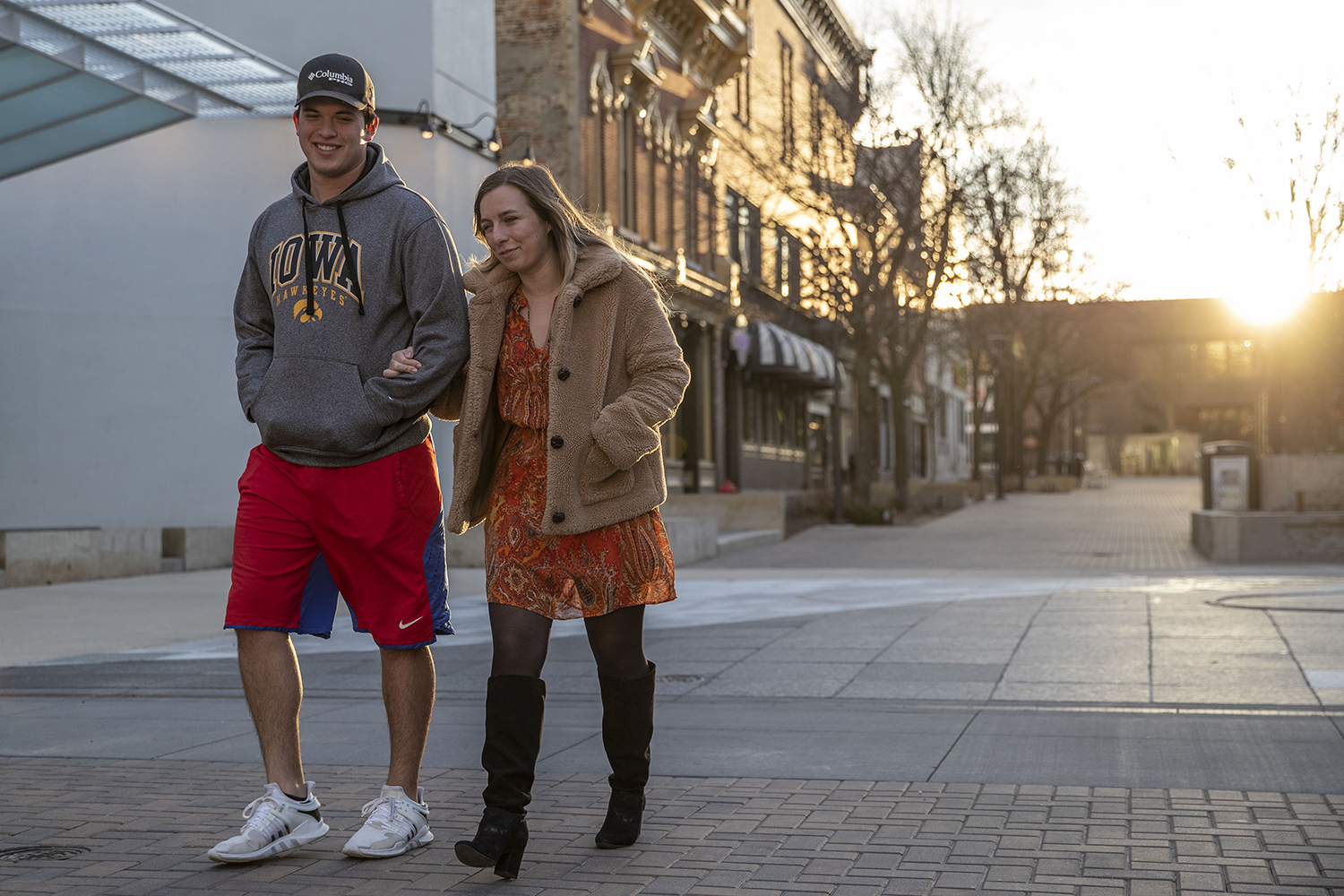 UI senior Matthew Whittle and first-year law student Bryony Whitaker walk downtown on Saturday, April 4, 2020. Downtown was quiet during the first weekend after spring break as classes have been moved online and the bars closed due to the coronavirus.

The weekends now come and go in Iowa City with no fanfare.

Parking spots — which are usually hard to come by in the busy Downtown District — are now plentiful along the city streets. The doors remain shuttered with the occasional delivery driver bobbing swiftly in and out of local restaurants to take food to hungry, cooped up customers.

The Pedestrian Mall, normally bracing around 7 p.m. on a Saturday for UI students to pack its many bars come nighttime, would go for minutes without any foot traffic. The latest chart-topping tunes weren’t playing from any establishment. No alcohol-infused chattering of Hawkeyes spilled out like static from the bars and onto the brick-laden downtown area.

UI senior Matthew Whittle, who was walking on the Ped Mall alongside Whitaker on April 4, said after that they’d “probably come down here just for the bar scene or something like that, just hang out for a while.”

Whittle said he’s lucked out so far with his plans after graduation to work at Lincoln Financial in Omaha, Nebraska remaining stable, though he anticipates not being able to immediately meet his team.

Although Whitaker has campus to return to for the remaining years studying law, as an international student, she’s uncertain when she’ll be able to see her family again.

State Board of Regents President Mike Richards has vowed that Iowa’s three public university campuses will be operating normally again come August, but Whitaker wasn’t so sure.

“I don’t know when we’re going to be coming back to campus because I think realistically September is a very early end goal in the grand scheme of things — we’ve still got to think about public health,” she said. “But I think everyone will just be thankful to see each other and finally be able to make some contact with other human beings.”