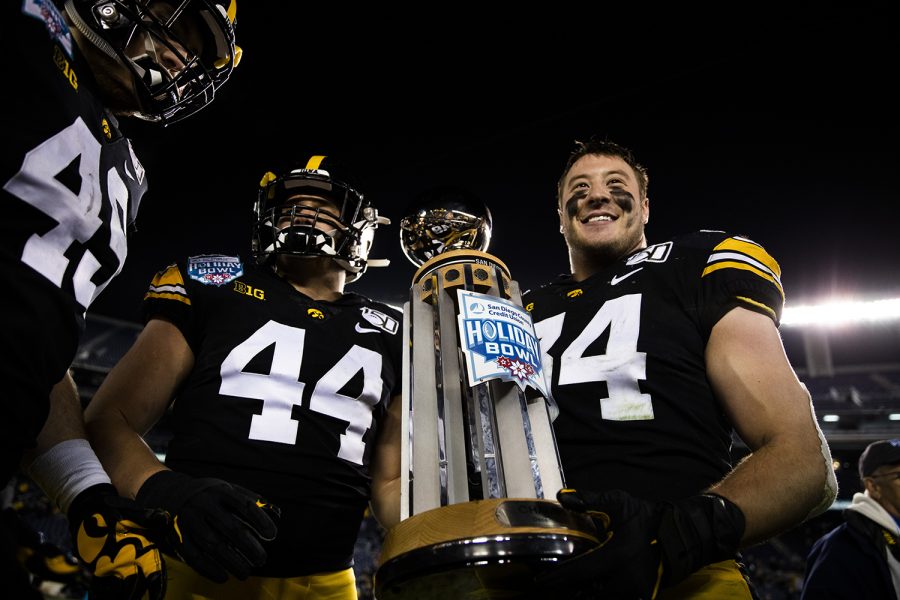 Iowa linebackers Seth Benson (left) and Kristian Welch holds the trophy after the Holiday Bowl game between Iowa and USC at SDCCU Stadium on Friday, December 27, 2019. The Hawkeyes defeated the Trojans 49-24.

The COVID-19 pandemic that has shut down both college and professional sports across the United States hit athletic programs at the University of Iowa particularly hard.

The Big Ten will re-evaluate organized team activities April 6, but this comes after many seasons have already come to a forced conclusion.

Due to cancelations and postponements, the championship-favorite Hawkeye wrestling team didn’t get a chance to compete for an NCAA title. A pair of promising basketball teams didn’t get to compete in their respective tournaments. Iowa track and field’s indoor season was halted at the NCAA Indoor Championships, and the hot start to the Hawkeye baseball and softball seasons could not carry forward.

These sports and others were hit by coronavirus during a high point for Iowa athletics. Despite the early and unsatisfactory ending to several seasons, the Hawkeyes offered several memorable moments over the past academic year.

In a game that took over six hours due to multiple weather delays, Iowa came out on top to win its fifth game in a row against Iowa State.

With under two minutes remaining, the Cyclones forced a punt, and it looked like they would have a chance for a game-winning drive. Instead, Deshaunte Jones muffed the punt for Iowa State, Devonte Young recovered for Iowa, and the Hawkeyes came out on top in an instant classic.

Iowa State ended their chances against Iowa with this muffed punt pic.twitter.com/qctUaUfE3u

The Hawkeyes were ranked inside the top 10 all season long and, after their success in the Big Ten, defeated Duke in the NCAA Tournament to advance to the Elite Eight.

For the second time in program history, Iowa soccer earned an at-large bid into the NCAA Tournament. It was the first appearance in the tournament for the Hawkeyes under David DiIanni.

Leading up to its NCAA Tournament appearance, Iowa soccer’s season included highlights such as a 1-0 upset victory over No. 14 North Carolina State and a win against Ohio State with seven seconds remaining in double overtime.

Kinnick Stadium is not kind to visiting top-10 teams. Minnesota found that out last season.

The Golden Gophers came into Iowa City undefeated and ranked No. 7 in the nation. A 13-0 lead at the end of the first quarter and clutch defense at the end of the game propelled the Hawkeyes to victory. The fans proceeded to storm the field, and Iowa used this as the start of a four-game win streak to conclude the season.

Senior Riley Mylenek finished his final cross country season for the Hawkeyes on a high note.

He became the first Iowa athlete to compete at back-to-back NCAA Cross Country Championships since Jeff Thode in 2010-11. Mylenek improved his finish by 56 spots this time around, coming in 85th place in the 10,000 meters (31:51.8).

Mylenek finished the season as Iowa’s top runner, posting the best time for the Hawkeyes 11 meets in a row.

The highlight of Duncan’s All-American season came against Nebraska on Black Friday. With the game tied at 24 with only seconds remaining in the game, Duncan sent a 48-yard field goal right through the uprights in Lincoln to defeat the Cornhuskers and send the Hawkeyes into bowl season with a victory.

In a road loss to Michigan, Luka Garza made it evident that he was the best player on the court. Garza went for 44 points, the third-most in a single game in program history.

The 44 points was the most by a visiting player in Crisler Center history and the second-highest scoring output by any player in the Arena’s history.

Jordan Bohannon made his final appearance of the 2019-20 season a memorable one. In his last game before undergoing season-ending hip surgery, Bohannon and the Hawkeyes blew out Iowa State at Hilton Coliseum, 84-68.

After the final buzzer, Bohannon took off his shoes and wrote, “To ISU, Thanks for the Memz.” He added his initials and his jersey No. 3 before leaving the shoes on the court.

After the deaths of Hayden Fry and Bump Elliott in December of 2019, the Iowa football team honored the Hawkeye legends in its Holiday Bowl matchup against USC. Iowa took the Tigerhawk logo of its helmets to honor Fry and wore a patch on its helmet to honor Elliott.

The Hawkeyes blew out the Trojans 49-24 behind three touchdowns by receiver Ihmir Smith-Marsette and a dominant game on the defensive line by A.J. Epenesa.

To celebrate, Iowa did the hokey pokey in the locker room — a tradition Fry brought to Iowa City.

The Hawkeyes faced a 17-point deficit on the road against the Badgers but proved that no lead held against them was safe in a 85-78 comeback victory.

This was the third game in a row Iowa won after trailing by double-digits after previously coming back by 14 points against Indiana and 15 against Minnesota.

Women’s basketball head coach Lisa Bluder has had plenty of highlights in her time with the Hawkeyes. Winning her 200th game against a Big Ten opponent is up there for being one of the best.

She joined Rutgers’ Vivian Stringer as the only Big Ten women’s basketball coaches to pass that milestone.

Megan Gustafson returned to Carver-Hawkeye Arena to see jersey put up in the rafters once and for all.

Gustafson’s 2,804 points stand as a program record for Iowa.

Iowa wrestling had plenty of high points in the regular season — such as setting the points record at the Midlands Championships or finishing the dual season undefeated — but the most notable among them was its victory over Penn State.

The Hawkeyes proved they were the best in the nation with the 19-17 victory.

Iowa won six of 10 bouts, including Michael Kemerer’s upset of No. 1 Mark Hall, which, along with the Carver-Hawkeye Arena crowd, gave the Hawkeyes the momentum to come from behind and win the dual. Tony Cassioppi’s victory at 285 put the Hawkeyes ahead and clinched a victory over the rival Nittany Lions.

Relay teams took down the Hawkeye records in the 400 and 800-free relays. Kelsey Drake also broke her own school record in the 200-fly.

Millie Sansome broke teammate Hannah Burvill’s Hawkeye record in the 100-back and then proceeded to move past her own mark in the 200-back.

The Hawkeyes ended the 2019-20 season with an undefeated record at home after a victory on Senior Night. This is the second season in a row the women’s basketball team has gone undefeated at home.

Iowa’s win pushed its winning streak at Carver-Hawkeye Arena to 36 games, the second longest streak in the nation.

Over four years, Iowa’s seniors went 62-7 on their home court.

The Big Ten Indoor Championships proved to be successful for Iowa track and field.

Wayne Lawrence won gold in the 200 and 400 meters and as a member of the 4×400 relay team to help push the men’s team to a second-place finish. Jaylan McConico continued his run of dominance in the 60-meter hurdles to also win gold, and thrower Laulauga Tausaga won her fourth career Big Ten Championship — but her first indoors — in the weight throw.

Lawrence and Tausaga were named the outstanding athletes of the meet for their performances. Tausaga was later named the Regional Female Field Athlete of the Year, making her the first female in program history to earn regional honors in back-to-back years.

After a walk-off home run by Austin Martin against No. 20 North Carolina and a victory over No. 14 Duke in Minnesota, the Iowa baseball team returned home to defeat Grand View. The victory was No. 900 in head coach Rick Heller’s career.

Kathleen Doyle winning Big Ten Player of the Year honors was the highlight of the women’s basketball season.

Garza also earned the Big Ten Player of the Year honor for the Hawkeyes. He is the first player to earn that award for men’s basketball in 52 years. The junior averaged 23.9 points per game on 54.2 percent shooting, while also hauling in 9.8 rebounds a contest.

Garza also earned AP first-team All-American honors and was named national player of the year by a variety of outlets, including ESPN, to become the first men’s player for Iowa to earn that distinction.

Iowa wrestling completed its climb back to the top of the Big Ten with a dominant performance at the Big Ten Championships. Nine Hawkeyes placed in the top five at the conference tournament.

This was the 36th team title in program history and Iowa’s first outright title since 2010.

Coming off of an upset of No. 16 Cornell, the Iowa men’s tennis team earned its highest ranking in program history.

The Hawkeyes came in at No. 20 in this ITA poll after starting the season with a 12-2 record, including a 10-1 mark at home.