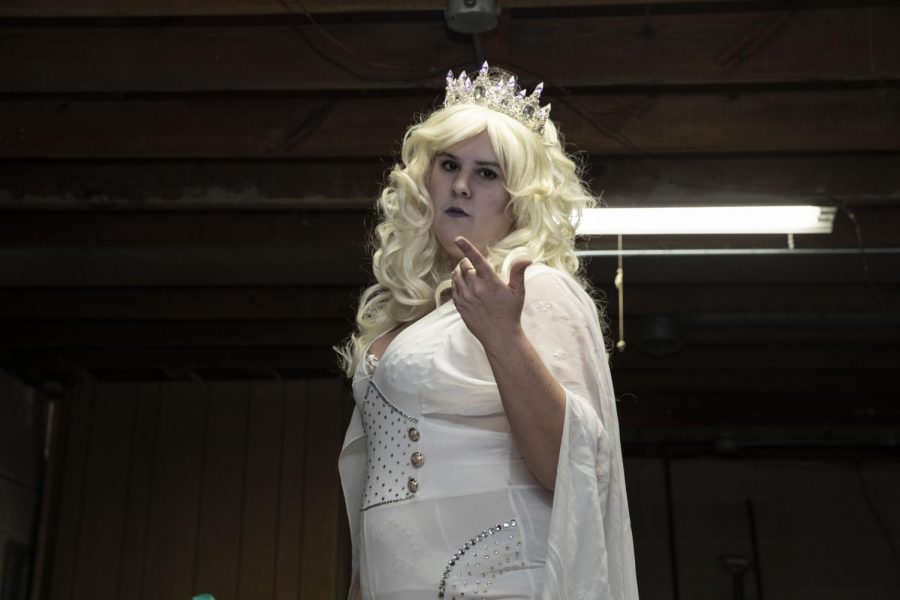 A new generation of burlesque: Rebellion Burlesque approaches performing with a political twist

Inside a small apartment, a group of women from Rebellion Burlesque crowded around each other, throwing friendly banter.

Once their plans were finalized, one woman dumped an Ulta box of makeup on the floor; the dancers scavenged through the mess to claim any products. In the background of the commotion, a cat slept peacefully in a play house.

Angela Weaver, known as Delia Belladonna during her performances, was the first dancer to workshop her piece. Donning a pink wig, purple lipstick, and fake eyelashes, she dressed in a costume consisting of a red and black corset. The ensemble was complemented by matching gloves and a feathery scarf.

While she strutted around the small space, Weaver was unapologetically risqué, using the burlesque to amuse her audience.

Burlesque is a genre of a performance where an artist intends to make their audience laugh by caricaturing serious subject matters, often through strip-teasing. Unlike stripping, burlesque is more comedic in tone.

Rebellion Burlesque is an Iowa City-based burlesque troupe that formed in 2017. Their mission is based in fusing entertainment, sex appeal, and activism.

While often displaying light-hearted acts, Rebellion Burlesque is currently working to define what burlesque looks like in Iowa City. The group invites dancers of all backgrounds to perform with them.

Rebellion Burlesque recently started their “calendar girl” series, where they’ll have a show each month that interludes several forms of social justice. These topics range from black history, to sex trafficking, to mental health awareness. Their next performance on March 21 will focus on climate change awareness, where they’ll gather donations to use for a charity fighting against the Australian wildfires.

Weaver said she enjoyed watching burlesque performances for a long time, but it took a push from a friend before she made her stage début. Around that time, she was recovering from battling breast cancer.

At first, Weaver didn’t want to be involved in burlesque — she suffered from stage fright. However, her co-worker strongly encouraged her to try out Rebellion Burlesque, showing Weaver the song, “It’s Good To Be Alive” by Imelda May, in which May takes on the appearance of the Bride of Frankenstein.

Weaver strongly identified with the classical horror icon while she underwent cancer treatment, so she infused both the song and the character’s aesthetic into her burlesque persona. 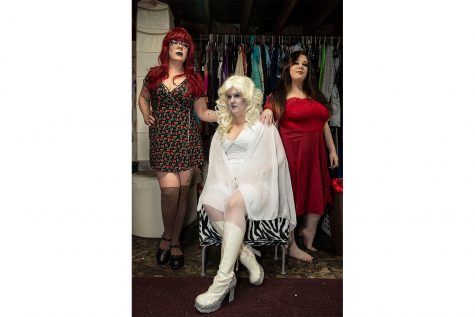 (From left) Angela Weaver, Cierra Laughlin, and Carmen Capriquaria pose for a portrait in their home in Coralville on Sunday, Feb. 23, 2020.

Another reason Weaver was drawn to Rebellion Burlesque was their acceptance of plus-sized performers.

“It’s really empowering to see different women get up there,” she said. “My lady friends here, we put a lot of time and work into it, but it’s really cool to see how it’s grown.”

Strong relationships between the women are prevalent within Rebellion Burlesque. The other dancers shout and cheer for Weaver while she takes her top off during the workshop, which is often done in their performance venues.

Weaver’s younger sister had ovarian cancer around the same time she was diagnosed with breast cancer. However, her sister died a few years later from the disease. Looking back on the event, Weaver said burlesque reminds her of what it means to be alive.

Shortly after Weaver finished workshopping, Carmen Capriquaria, one of the original founders, put on cheetah print lingerie, which she paired with a black parka and circular glasses that embody Elton John’s style.

Katie Goodale
Carmen poses for a portrait in a home in Coralville on Sunday, Feb. 23, 2020.

Showing off her legs, she handed out sunglasses to her audience while the song “Bennie and the Jets” played in her home. Nearby, a sign hung on her wall that states, “Keep your standards high, and your heels higher.”

Capriquaria was also encouraged to try out burlesque by her roommate, but said she initially felt an aversion to the idea, not caring for the style of classical burlesque, which is the most common genre.

Classical burlesque has elements of Victorian England aesthetics, placing more emphasis on comedy and teasing the audience, according to Capriquaria. With the introduction of Neo-Burlesque, Capriquaria said burlesque now has a wider variety of genres, allowing performers to add more choreography to their individual acts. Among these include “nerdlesque” and “gorelesque,” which uses cosplay and horror elements respectively.

After learning more about the different styles, she decided to do more research, concluding that doing burlesque would help hone all of her skills.

Capriquaria left the aforementioned troupes on her own terms. Later on, her roommate at the time pushed her to form her own group, eventually becoming Rebellion Burlesque. Since then, her perception of burlesque has radically changed — she now views it as a means to leverage social justice.

“I was looking for more of a purpose in my life,” Capriquaria said. “I love to perform, but I don’t think that performing is my ultimate passion in life. I really enjoyed the ability to use it as a platform to uplift awareness for lots of different causes and marginalized communities.”

RELATED: The Heartland Bombshells Burlesque Troupe: A Night of 1000 Britneys

Melinda Jean Myers, a University of Iowa assistant professor in contemporary dance,   previously put on her own burlesque show while attending the New York University Tisch School of Arts. Myers said she felt drawn to burlesque being “deeply based in the body.”

“I appreciate that burlesque is body positive,” Myers said. “When people are practicing, there’s this cultural knowing that it takes vulnerability and empowerment to have your body  be seen that way. I think burlesque is an invitation to be brave. It’s empowering and exciting where you’re sharing this type of work with a community.”

For their productions, Capriquaria said Rebellion Burlesque largely makes decisions as a team. The group is currently working to incorporate more theatrical elements, such as backdrops and props, into their shows. During rehearsals, the dancers will have a “kitten,” who acts as their stage manager.

Onstage, the performers become different people. Dancers create their own names and personalities.

Calling herself “the queen of Goodwill,” performer Cierra Laughlin’s talents lie in transforming the dancers into their personas.

Laughlin first experienced burlesque at the Mill, where she watched a performance by the Heartland Bombshells. There, she noticed how Capriquaria had a similar body shape as her. After talking with the performers after the show, Laughlin steadily worked her way from helping with retail merchandise for Rebellion Burlesque to becoming a performer.

Going by the name Arya Ready on stage, Laughlin said she uses a more light-hearted approach towards her burlesque performances, such as her “pigs in a blanket” routine where she’ll dress up as a croissant and Capriquaria will dress as a pig. 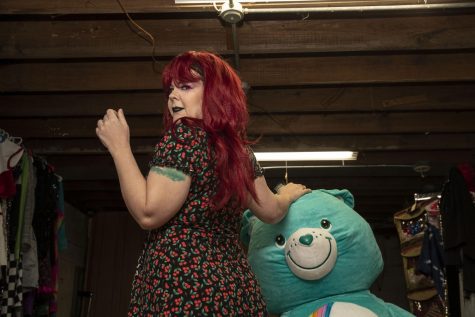 Katie Goodale Angela Weaver poses for a portrait in a home in Coralville on Sunday, Feb. 23, 2020.

Capriquaria said media depiction of burlesque tends to be inaccurate, especially in regards to the film Burlesque, starring Cher and Christina Aguilera. This is largely because the movie doesn’t discuss burlesque’s place in history.

“It’s not easily believed that it would have such an impact on history in general because of its nature of sexuality, and the fact that we still don’t believe women are deserving of owning their own bodies,” Capriquaria said.

All three of the dancers encouraged other women to attend their workshops, which can help them the fundamentals of burlesque. They also emphasized that no one is obligated to perform with them.

“It is important to have somebody else there with you,” Weaver said. “Before you even get on stage for that first time, you’ve bonded with these other people that are already doing it.”

With her dancers still around her, Capriquaria concluded her performance by “dying” as the song neared its end, exposing her chest in the process.

After she opened her eyes, her community burst into cheers.