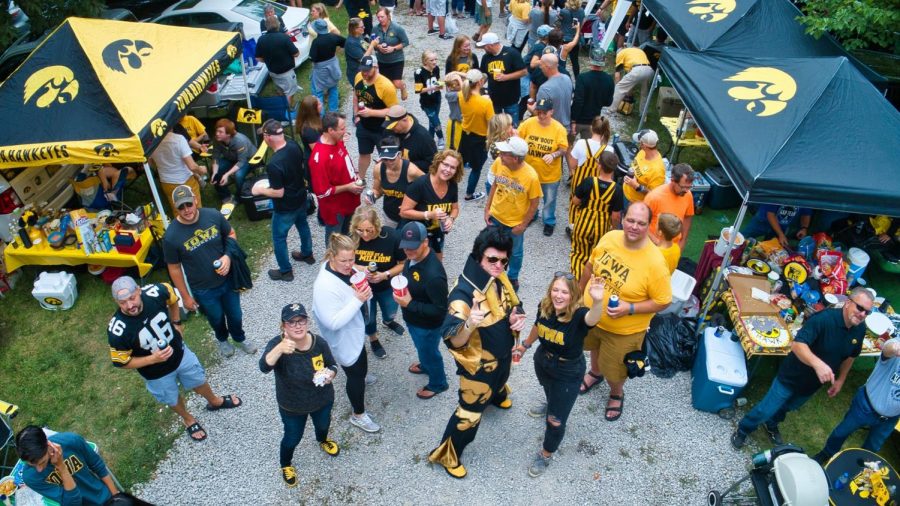 Greg Suckow, known as Hawkeye Elvis, tailgates with friends he met through Twitter.

Twitter has become an outlet for Iowa football’s biggest fans and its biggest critics alike, changing the way players approach the sport.

Tailgating has always been a pivotal experience on Hawkeye football Saturdays. But for some, this old tradition has taken a more modern twist.

Greg Suckow — better known as Hawkeye Elvis — regularly tailgates in the Melrose neighborhood on Iowa football game days. He can often be found there decked out in the iconic costume made by his mother in 2010, which he first wore at a game close to Halloween in Kinnick Stadium.

He has gathered quite the cult following since his emergence, most notably on social media where he has amassed well over 6,500 followers on Twitter in the last few years. What he did not expect was finding some of his greatest tailgating memories through the account.

“Everybody I tailgate with at my spot on Melrose, I met them all through Twitter,” he said. “I got to be friends with them through Twitter. They would follow me, and we’d eventually meet in person and just hit it off.”

Mapping it out in his head, Suckow rattles off the neighbors of his weekly tailgate, along with their Twitter handle: MamaHawk and ‘Katie Jo’ ­— who have a combined 4,236 followers on Twitter — typically tailgate right across the street, while ICHawkeye — adding in 1,186 followers — parks right next to him.

Twitter is flipping the entire idea of football fandom on its head, and the epicenter of all of it is in Iowa City.

Every year, a data-analytics research firm releases statistics concerning social media. In 2017, it found that of all tweets concerning television in a given week, approximately one-third of them occur on Sundays during the NFL season. A study in a prior year found that 50 percent of all tweets about television concern sports. Sports fans have invaded the space online.

There are hundreds, if not thousands, of anonymous, Iowa-centric accounts littering Twitter, but only a handful of them have amassed a significant following. Popular, anonymous accounts — earning a niche by making jokes about Hawkeye football — have gathered massive amounts of followers. Along with the group of Melrose tailgaters, accounts known anonymously as Hawkize, PlannedSickDays, and Irrational Hawkeye have also blown up. Those three have a combined follower count of over 33,400.

Irrational Hawkeye’s account first popped up in March of 2013, and it has been active ever since. But a shout out from PlannedSickDays — who has had a gigantic following for many years — earned IrrationalHawkeye a wider fan base.

“I was playing around with Twitter and had my own account for personal things, and was tweeting stuff more about the Hawkeyes,” said Irrational Hawkeye, who preferred to be identified with his handle. “But I realized that people who probably follow me didn’t really care [about that]. As I was looking around, I realized there was a community of whack-jobs like me out there.”

The makeup of a football fanatic has completely changed in the last decade, with those ‘whack-jobs’ hanging up the jersey and putting away the face paint in favor of a phone and a Twitter password. Some of the biggest Hawkeye fans are on Twitter these days, and their sheer tweet frequency and the amount of popularity they have certainly prove it.

This season, Hawkize, PlannedSickDays, and Irrational Hawkeye were at their peak in Iowa’s nationally televised matchup with Penn State on Oct. 12. Together, the accounts tweeted 158 times, garnering 4,047 total likes.

This enormous volume of ideas that floods the online sports world has led to some comical ramifications for the Iowa-centered accounts. Irrational Hawkeye’s antics toward Northwestern even warranted a blocking from Wildcat head coach Pat Fitzgerald.

“I don’t remember which [tweet] it was because I don’t really care, but I just find it amusing,” Irrational Hawkeye said. “The two I know for sure that block me are Fitzgerald and Dan Dakich, and I know I send a bunch of garbage at Dan Dakich.”

Poking fun at public figures like this is obviously a norm on social media. Occasionally, the recipient of the jokes will catch wind of them and simply press the block button.

But with college athletics specifically, criticizing student-athletes has become another matter altogether, and is almost becoming an epidemic many see as damaging.

Even in the Iowa fan base – which prides itself in its Midwestern values and being “Iowa Nice” – fans on Twitter display some ugly forms of football fandom. This season, quarterback Nate Stanley – even despite taking over the second spot in Iowa history in passing touchdowns – has taken a lot of hits from anonymous accounts.

“Obviously we get frustrated with the games and what’s going on, but some of the tweets I’ve seen directed at athletes, not only at Iowa but anywhere, go way out of bounds,” Irrational Hawkeye said. “I just don’t think there’s any need for that. But the reality is that these are the comments that people are making in their homes or in the bars, and they’ve been doing it as long as there have been sports. It’s just that now there’s an outlet for stupidity 24/7.”

This season’s criticism of Stanley, offensive coordinator Brian Ferentz, and the Hawkeye offense reached new heights after Iowa’s third loss of the season to Wisconsin last week. The team scored only six points through three quarters at Camp Randall Stadium, leading to a dip all the way down to No. 85 in total offense in the FBS.

Stanley still went 17-for-28 and threw two touchdowns, but evidently, many fans on Twitter expected a higher plateau for the three-year starter, who has taken a lot of hits on social media this season.

“People are entitled to their opinions,” Stanley said after the loss to Michigan. “I’ve said it before, but if you think you’re not going to get any negative feedback, you’re a little naïve…I’ve continued to get better at not even paying attention to a lot of that stuff. But it always seeps in a little bit.”

These negative ramifications of the use of Twitter has led to many programs barring student-athletes from holding Twitter accounts, and this has included the Hawkeye football program. But still, some college coaches completely release the reigns on their players, allowing them to Tweet in excess.

An extreme example of this came in 2015, when former Texas head coach Charlie Strong dealt with bickering among his players after the team got off to a 1-4 start.

Then-Longhorn safety Dylan Haines verbally criticized the work ethic of his freshmen teammates, who later took to Twitter to defend themselves and bite back. Freshman Charles Omenihu fired back on Haines in a tweet, suggesting that Haines should “think before you speak.” The tweet-off climaxed with freshman Kris Boyd retweeting a message indicating his desire to transfer from the program.

One of the only times head coach Kirk Ferentz has spoken about his no-Twitter policy came directly following the incident.

“I’ve just read so many of those things where a guy tweets something or puts it out there in public and then four hours later issues this nice, long, elaborate apology that somebody else wrote for them,” he said. “It’s usually pretty disingenuous. I’d hate to see one of our guys be in that situation, because usually the things that they blurt out are not becoming, and then usually the follow-ups are even less flattering.”

This long-standing policy exists to this day, as the usage of Twitter has only amplified. Notably, the Hawkeye men’s basketball team still allows its players to tweet during the season. Still, current Iowa football players see the value in shutting out the noise from the internet.

“We just want to focus on us and the voices inside this building, and not focus on what people are saying about us [on Twitter], good or bad,” sophomore defensive back Jack Koerner said.

More than just protecting the football mindset of these college athletes, it has become essential to make sure their mental health is in strong condition with handling criticism online. Just a few weeks ago, the Cleveland Browns’ Jermaine Whitehead was so thrown off by personal criticism, that he went on an expletive-heavy and derogatory rant that led to his release.

“It’s one thing to love the program and be a fanatic about it, but man, when you start attacking these guys personally, it just gets crazy,” Suckow said. “And I think that’s where Kirk’s really smart in keeping these guys off Twitter, not just for their ability to focus, but for their own mental health, so they don’t have to listen to people yapping at them.”

But the Hawkeye fan remains pure in a lot of ways on social media, still ragging on its rival Nebraska and discussing Iowa recruiting. On Nov. 2, Irrational Hawkeye brought that to the fore, keeping in mind the loss of the Cornhuskers to Purdue earlier that same day.

“We’re just like-minded people, and since we all live with two, three, and four screens in our worlds now, it’s pretty easy to sit there and watch a game, and like Nebraska today, just send out tweets about how happy you are that they’re losing again,” he said.