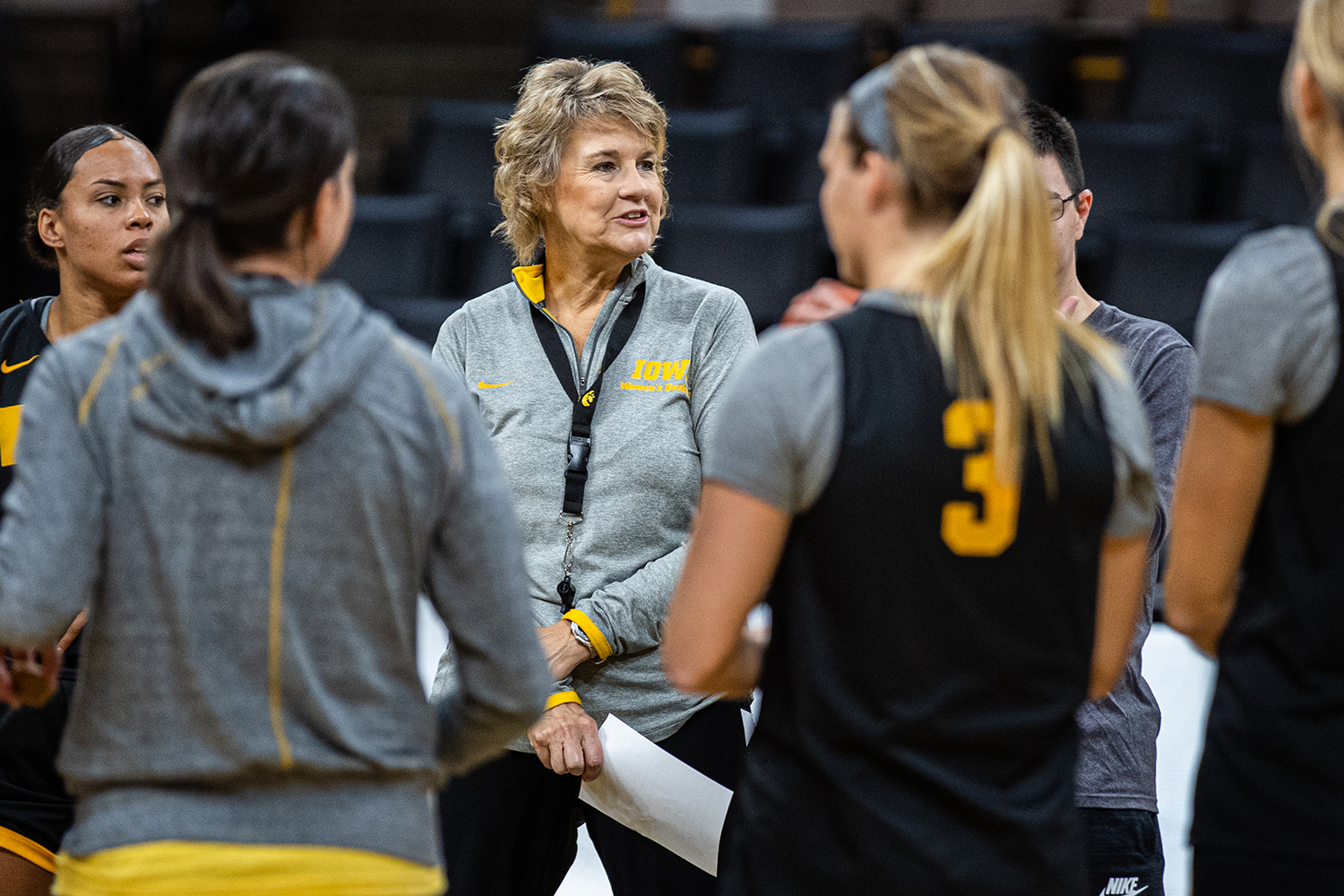 Lisa Bluder’s tenure as head coach for Iowa women’s basketball kicks off its 20th season tonight. Off the court, however, Bluder is far more than an X’s and O’s coach.

Iowa women’s basketball head coach Lisa Bluder’s mark on the University of Iowa Athletics Department is unquestionable; the wins, trophies, and accolades that have come to the Hawkeyes are to be expected from a tenacious leader who’s been at the helm for two decades.

From amassing more than 750 total wins to reaching the Elite Eight in the NCAA Tournament in 2019, Bluder has achieved nearly everything a coach could wish for during the course of her career. The 2019 Naismith Coach of the Year has also produced 16 professional basketball players, including most recently Megan Gustafson, who ended her career as the Hawkeyes’ all-time leading scorer and the 2019 espnW National Player of the Year.

But those accolades are not the main accomplishments for which she wishes to be remembered.

Rather, Bluder says, it’s the impact she’s had on the confidence and character of each of her players that means the most. It’s the path she has paved for female leaders in any aspect, not just sports. It’s the attitude she displays to the world — one of equal parts compassion and competition.

“That’s kind of why we do this,” Bluder said. “You hope that you make some small impact in these women’s lives.”

The Iowa women’s basketball team was one of the most successful in the nation in 2019. Strong veteran leadership from a trio of seniors brought confidence to the Hawkeyes. Off the clipboard, however, is where Bluder’s personal influence on the team can be seen.

“She cares about us and who we are,” junior Alexis Sevillian said. “Not just so focused or worried about basketball success — worried about our life and school, how we’re doing, ways that she can help us.” 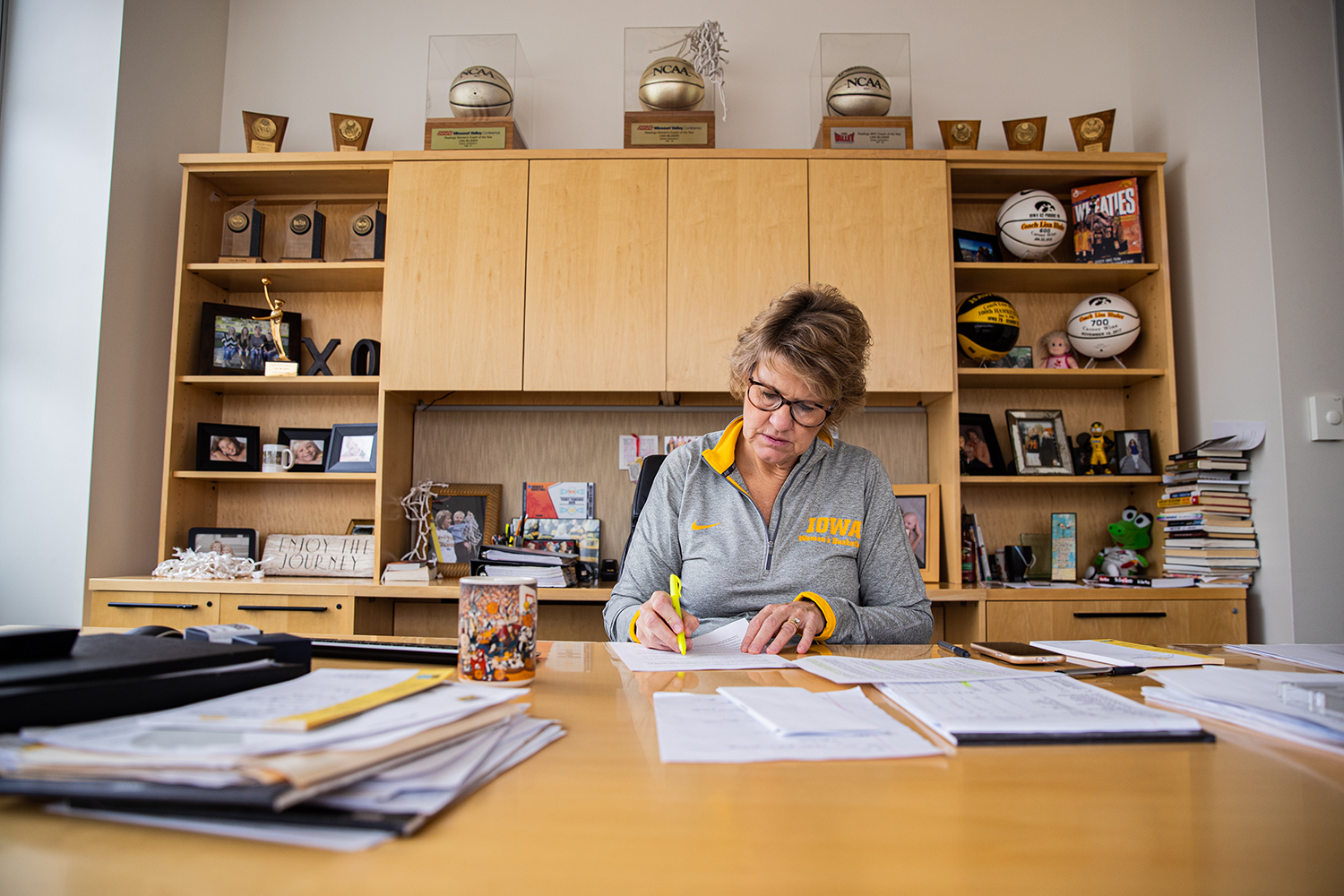 Bluder seemed to have immediate success since her head-coaching début at St. Ambrose University in 1984. The Wisconsin-born coach who grew up in Marion attributes her winning ways during this first stint to former Iowa head coach C. Vivian Stringer, who led the Hawkeyes for 12 seasons, during which she made nine NCAA Tournament appearances.

“When I was at St. Ambrose I would work her camps for her in the summer,” Bluder said. “That would bring me to this campus and so she’s always somebody that I looked up to.”

Her six seasons with the Fighting Bees earned her the same role with the Bulldogs of Drake University for the next decade. The turn of the millennium brought Bluder to Iowa City. Since taking over the Hawkeye program in 2000, she’s won the Big Ten tournament twice.

Now, Bluder looks to be an inspirational figure for the women who play on her team.

“The knowledge she instills in us is something that is so powerful,” Sevillian said. “Not just basketball-wise, because I think a lot of people get focused on that just because she is a coach, but about how women can impact the world, change the world; us and our generation, how we can change the world. Things that we can do and wanting us to succeed, wanting us to do great things in life.”

Senior Kathleen Doyle adds that Bluder’s influence on her is strengthened by the fact that she is the first female head coach for whom she’s ever played.

“The influence that she has on the community and how she’s so admired — it’s really cool to see a woman as a role model for what you can achieve,” Doyle said.

A number of Iowa women’s basketball players can recall moments in which their head coach offered more than just game plans.

“She’s kind of like a second mom; she has her own kids, but I kind of feel like we’re her second set of kids,” Doyle said. “She just genuinely wants you to become confident and independent on the court and off the court.”

Bluder agrees, and treats her team as her family. 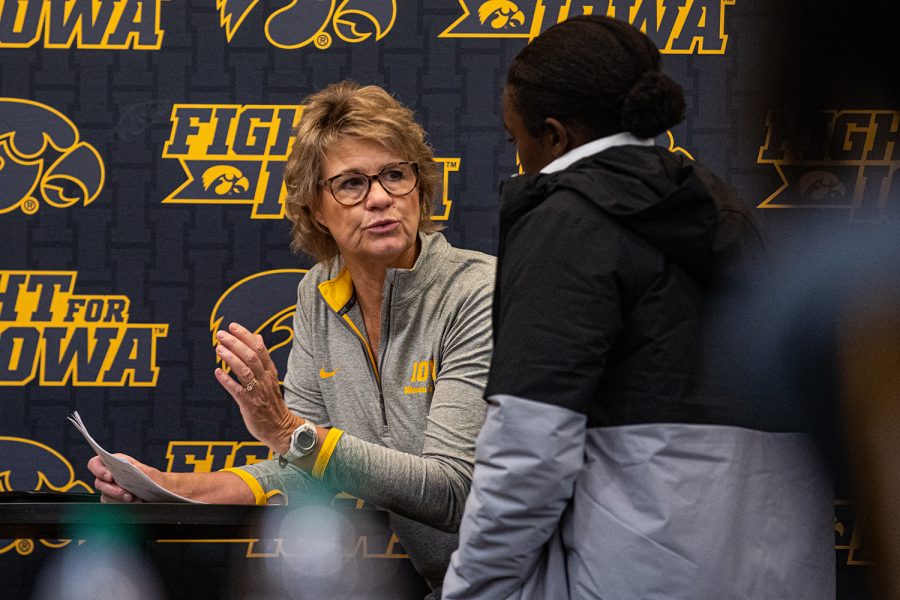 Perhaps nobody has been a better witness to the personal effect Bluder makes on players — both on and off the court — than assistant head coach Jenni Fitzgerald, who began working with Bluder 28 years ago at Drake. After being so close to the three-time Big Ten Women’s Basketball Coach of the Year for so long, Fitzgerald attested to Bluder’s mission: ensuring that everyone involved reaches their full potential.

“What makes Lisa super cool is that she helps each coach continue to grow in their roles and yet she also knows what we’re really good at and has us focus on that as well,” Fitzgerald said. “She’s really good at growing the people around her.” 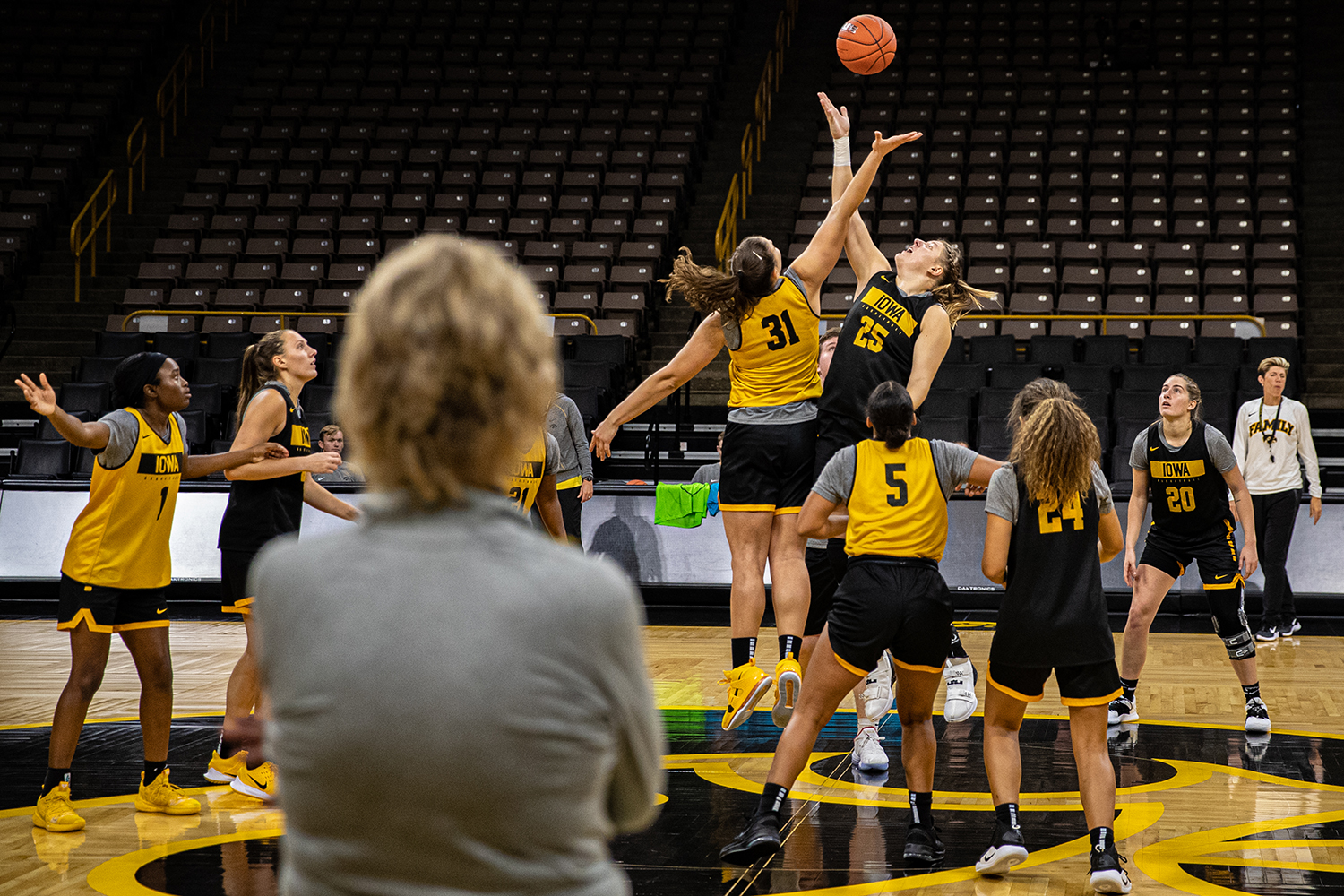 During practice, it’s clear exactly how Bluder accomplishes this. Anyone in Carver-Hawkeye Arena can feel the intensity and volume she brings onto the court; she dissects every detail of a drill until it’s executed without flaw. Arms crossed and whistle around her neck, she dictates directions to her defense and calls out different offensive attacks for the players.

Even after being a college head coach for more than three decades, Bluder’s attention to detail hasn’t changed.

“She hasn’t lost any of that enthusiasm or passion, and that’s what makes her so special,” Fitzgerald said.

In Bluder’s office, the ambiance couldn’t be more different. The natural light from the wall-sized windows complements the near silence of the workplace, save a few taps from the keyboard or a highlighter brushing against practice notes. Pictures of Bluder with her family and Iowa football Kid Captains splice the plaques she’s earned for hundreds of wins.

“It’s about being the best you can be, whatever that is; if that’s being in the NCAA tournament, whether that’s going to the Final Four, whether it’s being a mid-place in the Big Ten,” Bluder said. “It’s a new team, so how can this team be its best, and what is its best? I think that’s what you have to identify every year.”

One thing that must change for the coach of any college sport, though, is the roster. The NCAA women’s basketball’s 16th-winningest coach has grown a list of accomplished players, producing 22 different All-Big Ten honorees. All the turnover on the roster, though, doesn’t faze Bluder, but instead allows her to play to another one of her strengths: adaptation.

“I think that she just adapts to the team that she has that year. My freshman year we had Ally [Disterhoft] and Megan [Gustafson], so she adapted to both of their strengths, and then we had Megan and Hannah [Stewart] and Tania [Davis] the next two years,” senior Amanda Ollinger said. “Then this year, having a completely new-looking team, she’s just done a great job.”

Bluder knows how to win. She knows how to create champions. Her excursion into the 2019-20 season begins tonight at Carver-Hawkeye, where besides the scoreboard, she will focus on the mission she values the most: creating leaders.

“I think it’s a really crucial time in their development,” Bluder said. “And I’m hoping that all of us on our staff has some part to do with them progressing as strong women and good role models.”