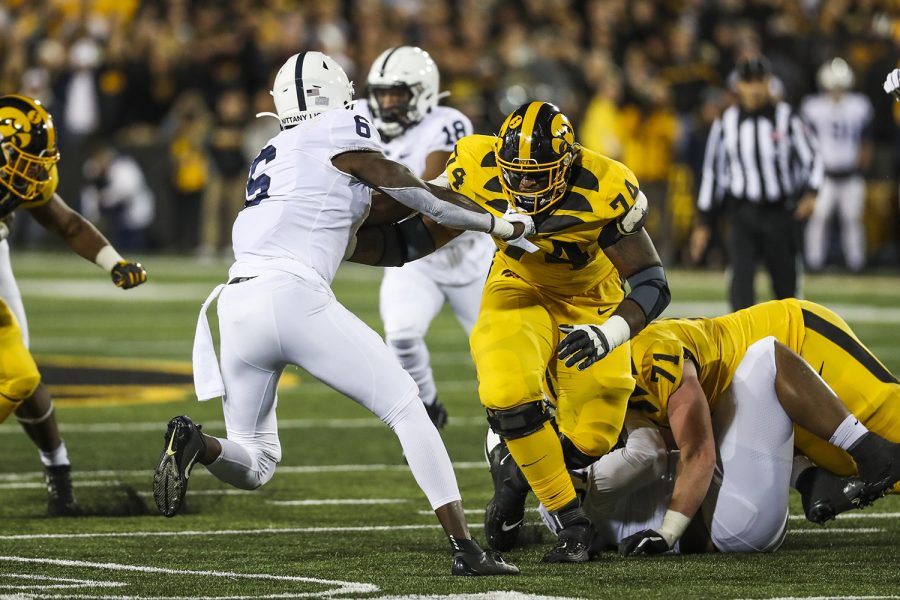 Before Tristan Wirfs became a star tackle on Iowa's offensive line, he found himself on the podium throughout his successful prep wrestling career.

Atop the 2017 heavyweight WaMaC Conference wrestling podium stood Aaron Costello, a wrestler who would go on to win the Class 3A state title and redshirt at Iowa later that year.

Beside him, one peg lower but nevertheless towering over him, stood another Iowa commit, one that would claim his own state title that year in Class 2A. To get there, though, was a success story in itself.

As Tristan Wirfs walked out in front of the Mount Vernon crowd as part of the 2016 homecoming court, his bio of many sports accolades was read over the loudspeaker.

After months of hearing rumors around town and never giving up hope, Aaron Truitt, Mount Vernon’s assistant wrestling coach and longtime teacher, coach, and mentor to Wirfs, went to confront him.

“Hey Tristan, they messed up your bio,” he recalled saying.

Wirfs laughed it off, but Truitt was serious. He made him a deal: finish out football season, and after it was over, they would sit down to talk about Wirfs’ future on the mat.

Wirfs was hesitant to wrestle from his freshman year. Mount Vernon needed a heavyweight, and Wirfs, being a big guy, was the ideal candidate. But he didn’t want to be shoved into the role.

So, Truitt and the rest of the coaching staff made him a deal, their first of his career. He would wrestle varsity in dual meets, and in weekend tournaments, he would have his pick between the JV and varsity squads.

It didn’t take long for Wirfs to stick with the big guys, but that freshman year proved to be a tough one. He went 10-27 at the varsity level.

“You can’t judge the experience off of your freshman season,” Truitt recalled telling Wirfs. “You have to wait until February 2017 when you’re a senior, the final chapter is written.”

In his junior year, he was one spot from standing on the podium at state, and that could have been it. Instead, Wirfs came on a visit to Iowa and talked to Landan and Levi Paulsen, two more of Iowa’s many offensive linemen that had wrestling success in high school.

“I’ve grown up knowing them through wrestling, so it’s really exciting seeing that whole offense and defense just evolve, and that wrestling’s kind of at the core of some of the talents that they have,” Costello said.

After visiting Iowa, Wirfs made his decision. 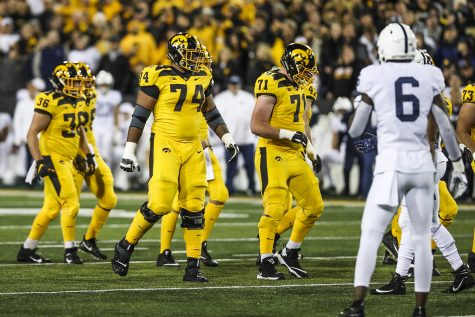 He wrote Truitt a letter and sent it before Mount Vernon’s annual fall chili cook-off that year.

“He basically said, ‘Hey, you told me three years ago when I was a freshman that February 2017 is when I’ll write the final chapter of my wrestling career. I’m going to see it through,’” Truitt recalled.

The importance of what he could accomplish wasn’t lost on Wirfs.

“And I think I said, ‘I want my name up on the wall’ in the wrestling room,” Wirfs said. “That’s where our state champs are; they’re painted on the wall. So, it [was] kind of just me telling them I’m holding up my end of the bargain.”

The first step was done. Wirfs then had to lose the weight he had put on for football and would eventually need the next fall at Iowa.

At the end of football season, he weighed 325 pounds, 40 pounds over the heavyweight limit. He made the cut in four-to-five weeks, but his commitment to wrestling showed the most after the U.S. Army All-American Bowl Game, which Wirfs was selected to play in.

After taking a few days off for school and recovery, Wirfs got back into the wrestling room and Truitt asked how much time he would need to get back down to weight.

“Who do we wrestle tomorrow? Do they have heavyweights?” Truitt recalled Wirfs asking.

From spending the night at his head coach’s house the first time he was cutting weight to help fight the temptation of getting up in the middle of the night to eat, to being all-in committed to helping the wrestling program succeed no matter what the personal cost, Wirfs’ work ethic has transferred from the wrestling mat to the football field with ease.

On Aug. 31, Iowa’s first football game of the season, offensive tackle Alaric Jackson went down with an injury. Wirfs moved from right tackle to the left side of the offensive line, something that he didn’t do much of in practice.

It worked out for the Hawkeyes, however, and they downed Miami (Ohio) 38-14 while the makeshift offensive line helped the running game to 213 yards and left Nate Stanley unprotected for a sack only once.

“[Wirfs] did a good job sliding in and then Levi [Paulsen] slid out to the tackle position and didn’t seem to be affected, either,” head coach Kirk Ferentz said. “That’s one benefit of having guys that have played. But not every player is capable of doing that, too. I’ll qualify it by saying that.”

Paired with Wirfs on the offensive line this year is center Tyler Linderbaum, who also stood on the same WaMaC conference podium as Wirfs and Costello after finishing third.

“It’s kind of a cool thing, just seeing three guys that you know coming into the Big Ten, living out their dreams of playing sports and all that,” Linderbaum said.

Linderbaum pinned Wirfs in his last meet before state, and that was the moment Wirfs’ mindset and the way he wrestled changed. After talking to Truitt and the other coaches, he started pushing the envelope in his matches and being more aggressive for a full seven minutes.

Wirfs beat his first two opponents in the state tournament in wide margins for heavyweight standards, but the night before the finals match, he came down with the flu.

“I woke up, and I took a lot of ibuprofen,” Wirfs said. “I was drinking like a bottle of honey because I had a sore throat. Then, I went out there and I think my adrenaline kicked in there before the match.”

Wirfs wrestled the opponent he lost to in his final match during his senior year, giving him a chance to show how far he had come.

“Even though it was a close match on the scoreboard, Tristan was in control pretty much the whole match and ended up getting a takedown with about a minute left, so I think 3-2 was the final score,” Truitt said. “It was an awesome ending, a storybook ending, and in my career, that’s definitely one of the highs.”

That wasn’t the last time Wirfs made a mark on Mount Vernon athletics. As a four-year letterwinner on the track team, he was the fourth Iowa male prep to win both the shot put and discus titles in back-to-back years and the first to win three-straight discus titles since the 1950s. His career-best throw of 66-3 1/4 in the shot put ranked sixth-best nationally and second-best all-time in the state of Iowa.

Being an all-around athlete has propelled Wirfs into his success on the football field thus far, helping him to a starting role in the final eight games of his freshman year and every game since.

“From track, it’s just explosiveness; you’ve got to be quick and explosive through the ranks,” Wirfs said. “And wrestling, people ask that a lot. I think the biggest thing is body control. It’s just being able to tell where you’re able to flip your hips and stuff like that, that kind of translates to football, so if you get in a weird position on a block to be able to stay on your feet.”