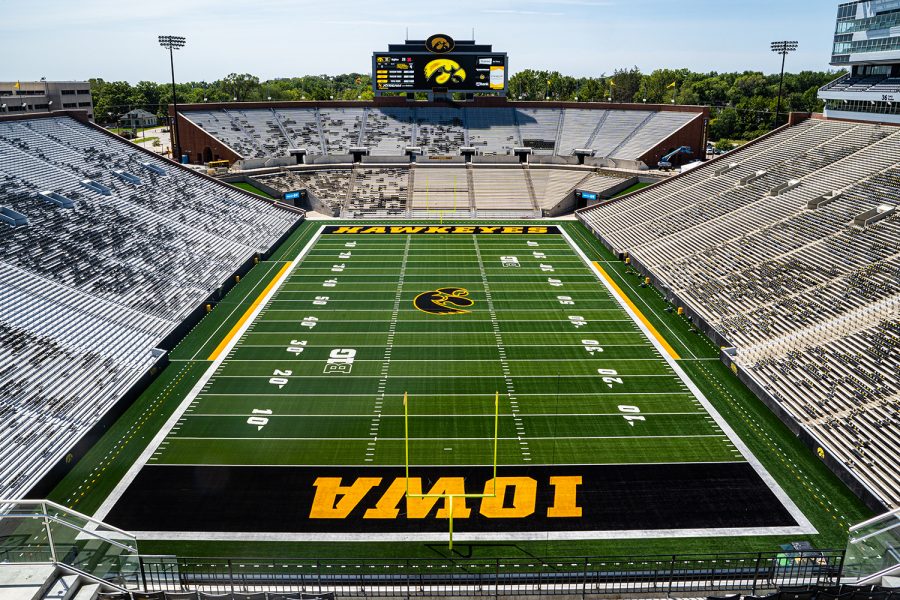 New Kinnick back in primetime

The nation will get its first look at the newly revamped Kinnick Stadium in Iowa’s matchup with Penn State this weekend.

The most iconic and anticipated moment of any Iowa football game: the Swarm. Started in 1979 by Hayden Fry, players inch out of the end zone and lock arms, all while taking the field to hordes of fans pounding the walls of the field to a steady beat. Generations have come and gone through the Hawkeye program — as have popular music genres for players and students — but AC/DC’s “Back in Black” still holds a special aura for the moment.

No one knew what else was missing until this year. Just last season, Hawkeye fans looked to the video board to watch the team meander through the tunnel, which was made of normal-looking plain concrete and stone slabs on the walls. It wasn’t until this year that the tone of the pregame ritual struck a wholly different chord, and that was thanks to some paint and a couple of neon signs.

These updates are only a portion of what has happened at Kinnick Stadium in the last several years. A new tunnel, an entirely new end zone in the stadium, a new jumbotron, and historic statues seek to enhance game day experiences for fans and players. With Saturday’s night matchup against Penn State being a primetime bout on ABC, it’s the first opportunity for the program to broadcast these changes to the nation.

Programs across the country have taken steps like these in the past several years to enhance in-game hype for players. The new tunnel in the south end zone is the clearest example of this, as it is truly reminiscent of an NFL-type atmosphere. Outside of Iowa, similar updates have become national phenomena; the Turnover Chain at Miami, for example, has been a popular item in the national media and has even become a recruiting tool in Miami.

Outsiders to the Hawkeye football program would believe that the new Iowa tunnel has a similar effect. But the new tunnel really doesn’t fit with the atmosphere, tradition, or tone of Iowa head coach Kirk Ferentz’s program.

“It definitely gets you into the mood,” defensive end Chauncey Golston said. “But if you need something like that to get you going, then I don’t think this is the program for you.”

There’s no question that the new tunnel is an update from the old version of it in the south end zone. While the tunnel is almost more fan-service than it is a player-focused hype tool, it has had a different effect on the program internally. The new renovations in the south tunnel were largely funded by Hawkeye football alumni, a gesture current players find meaningful.

“I think the biggest thing for me was that the money put into that renovation came from former Hawkeye players,” quarterback Nate Stanley said. “That’s what makes it so special, it’s just that extra respect for what we go through on a daily basis and knowing that those guys still care about us.”

The words that litter the tunnel make sense given the origin of the funds. Bright yellow lettering showing the words “Tough,” “Smart,” “Together,” and “Physical” line the hallway of the night-black walls.

Saturday’s game against Penn State is the first time this tunnel — and its added effect to the pregame festivities — will be displayed on primetime television. The same goes for the now-complete north end zone stands and Jumbotron, which were largely incomplete a year ago.

The north end zone renovations — part of the $89.9 million Kinnick Edge efforts first announced in 2016 — add much to the functionality of the gameday experience. The updates led to a 146 percent increase in restrooms in Kinnick Stadium, a 90 percent increase in concession availability, and a brand new club seating section.

Even though the players don’t believe the tunnel adds to their hype on game day, they do think the new north end zone will have an impact on primetime games in Kinnick. The new end zone actually moved the north-side stands closer to the field, and players believe that itself has a great effect on the noise level on the north side of Kinnick’s field.

“I definitely think it’s louder, especially on that side of the field on the north side,” Stanley said. “Especially with the Jumbotron up on top this year, it keeps the sound level up.”

Players realize the opportunity they have this weekend with Penn State. The new setup at Kinnick does nothing to tamper the environment that Hawkeye fans are used to, and several of the players believe that the environment has grown to new, interesting heights.

“When I do [score] in there, when I score in [the north end zone], it gets pretty loud,” wide receiver Ihmir Smith-Marsette said. “Hopefully, we do what we have to do this weekend and get that crowd going.”

Penn State’s players and staff are preparing for this climate in earnest. Nittany Lion head coach James Franklin may have described Iowa’s distinct home-field advantage best this week ahead of his team’s test on the road.

The last time Franklin led a team into Kinnick, Penn State took down Iowa in a night game on a last-second touchdown in 2017, but the environment will be different this time around.

Since then, Kinnick Stadium has become, in a lot of ways, unrecognizable. These stadium updates — paired with the new University of Iowa Stead Family Children’s Hospital built in 2017 right across the street — have brought the stadium into a new era.

But new elements of the stadium make sure to be a reminder of the program’s roots, as well. A relief of Hawkeye great Duke Slater — sculpted by J. Brett Grill and measuring 6.5-by-14 feet — now lies on the outer wall of the north side of the stadium along Evashevski Drive.

The relief depicts Slater. a tackle at Iowa from 1918-21, blocking for running back Gordon Locke in a 1921 matchup between Iowa and Knute Rockne-led Notre Dame. It also brings to life a famous photograph in Iowa football’s history. Slater went on to become a Hawkeye great, earning numerous All-American nods.

But Slater’s true challenges were off the field. An African American from Clinton, Iowa, Slater faced significant barriers to entry in the football landscape. Even while facing these challenges, Slater had a long and fruitful career professional football that spanned 10 years. He was also among the first group of African Americans elected into the College Football Hall of Fame in 1951.

“His life in football and beyond was defined by triumph and relentless breaking of boundaries,” the plaque next to the relief reads.

And so, when Iowa takes the field against Penn State this weekend, national fans of college football will be surprised to see a wholly new-looking Kinnick Stadium in primetime. New infrastructure and updates all signify the program progressing into a new era of football in Iowa’s home stadium. But the parts that make Kinnick so special — The Swarm, the tradition, the history — all survive in the greatest details of Iowa’s home field.