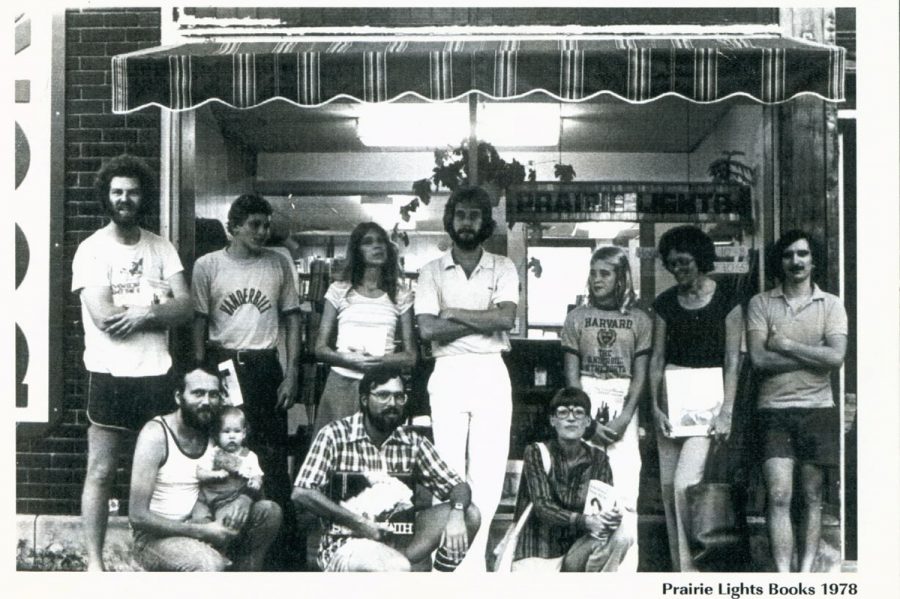 Readings, readers, and writers: A brief history of Prairie Lights

With a reading-based community and literary fame, Prairie Lights continues to serve Iowa City 41 years after its opening.

Bookshelves line the first floor of Prairie Lights, weighed down by several lifetimes’ worth of literature. Manning the help center desk in the far back of the bookstore, surrounded by old, boxy computers, is co-owner Jan Weismiller.

Donning bright-red eyeglasses and a warm smile, Weismiller reminisced on Prairie Lights’ fledgling years when former owner Jim Harris first opened the bookstore in 1978 on Linn Street. Weismiller said she never thought she would come to co-own a bookstore, but the unlikely turn of events happened more than 40 years ago, beginning when she was a 23-year-old recent University of Iowa graduate.

“I first went [to Prairie Lights] because a friend of mine had ordered a book for me as a graduation present,” Weismiller said. “The store was so small, and Jim barely had any employees. When he first asked me to work there, I said no. But he took me out for coffee and convinced me that it would be fun… Anybody who’s ever worked in a bookstore knows it’s extremely fun.”

Before Harris planted his literary roots in Iowa City, he was working in Seattle at — coincidentally — a bookstore. Harris opened Prairie Lights in 1978 and named it after the folk song by Canadian singer Gordon Lightfoot, which he said “embodies what the store is: a light on the prairie.”

“I loved it. I decided that this is what I wanted to do, but the question was where to do it,” Harris said. “Seattle didn’t need any more bookstores. I looked at some other college towns, but I was most familiar with Iowa because I graduated from here, and there was no bookstore in Iowa City at the time.”

In 1983, Prairie Lights moved from quiet Linn Street to bustling South Dubuque Street. Twenty-six years later, Harris determined his book store owning days were coming to a close. He sold the store to Weismiller and Jane Mead, the second co-owner.

Mead, who died this month, lived in California and worked as a poet.

Although Harris’ bookselling days are over, this hasn’t stopped his daily visits to Prairie Lights, where he can be seen enjoying the coffee shop, reading, or talking to fellow shoppers. Authors from around the world visit the bookstore along with Harris, eager to share their books with fellow readers.

“Often, in most cases, they are graduates from the Writers’ Workshop and are poets who have come to a lot of poetry readings that meant a great deal to them,” said Kathleen Johnson, the bookstore’s events coordinator. “They sat in the café writing their poetry, essays, or novels. When their books get published four years later, they want to be on the other side of the lectern. It’s really like a way of coming full circle for them.”

Readings were introduced at its old location, but the Prairie Lights Reading Series didn’t really take off until 1990, when publishers began sending their authors on book tours.

“Before 1990, readings weren’t a common thing,” Weissmiller said. “For the first 12 years, we rarely had readings. We only had the International Writing Program meetings on Sundays in the fall.”

In 1995, a partnership sparked between Harris and Iowa Public Radio. For nearly 18 years, Prairie Lights’ readings were broadcasted to Iowan’s keen ears.

Unfortunately, public interest began to drop in the following years and the show was canceled. To overcome this obstacle, the store began live streaming its readings and posting them to their website.

“I went to New York and I came up from the subway on Times Square and someone was yelling at me,” Weismiller said. “They kept saying, ‘Prairie Lights books — Iowa City, Iowa!’ They just recognized me because somebody had been visiting someone in Iowa City and had come in the store.”

The bookstore’s popularity could possibly be because of its connection to the International Writing program — or, as Johnson believes, because of Harris’ traveling and socializing. Several acclaimed literary figures have walked among the rows of bookshelves, including Margaret Atwood, the late Toni Morrison, Stephen King, and former President Barack Obama.

Regardless, part of Prairie Lights’ success can be attributed to the fact that the shops controls what kind of books to order.

“A lot of chain bookstores have different incentives and different reasons that they have to do different displays,” Johnson said. “We order what people will be interested in — at least we think we can.”

According to the Association of American Publishers, local bookstores are thriving, with chain bookstores being less of a threat than ever as hardback book sales spiked by 6.9 percent and paperbacks rose by 1.1 percent in 2018. Along with Prairie Lights, another local bookstore, Sidekick Coffee & Books, has opened in Iowa City

When Kindles and e-books first hit the market, Weismiller said, it was predicted that books would disappear in three years. Supposedly, half of all book sales would take place on the Kindle, she said. However, that prediction proved false.

“People like reading real books,” Weismiller said. “There’s a lot of studies done that say you process information a lot better if you’re actually touching the paper. You’re not tempted to skim as much.”

The Iowa City community plays a lead role in the history of Prairie Lights. Iowa City is rich with local art and touts its status as the world’s third City of Literature. Weismiller said Prairie Lights’ customers are excited to peruse between bookshelves and listen to readings.

“The readings are exciting because the audience is so good,” Weismiller said. “They ask good questions, and they’re really attentive, and I think in the store that happens to people — they talk to each other. I mean, they see each other in here, and they talk about books.”

The growing number of socially conscious college students is important to the store as well, Johnson said.

“It’s really important to a lot of people that they do not support things that treat people badly,” Johnson said. “And I think students are really starting to realize that it matters where they spend their money.”

With its supportive community, coffee shop, readings, and a litany of books, Weismiller and Johnson agreed that Prairie Lights is certainly a destination.