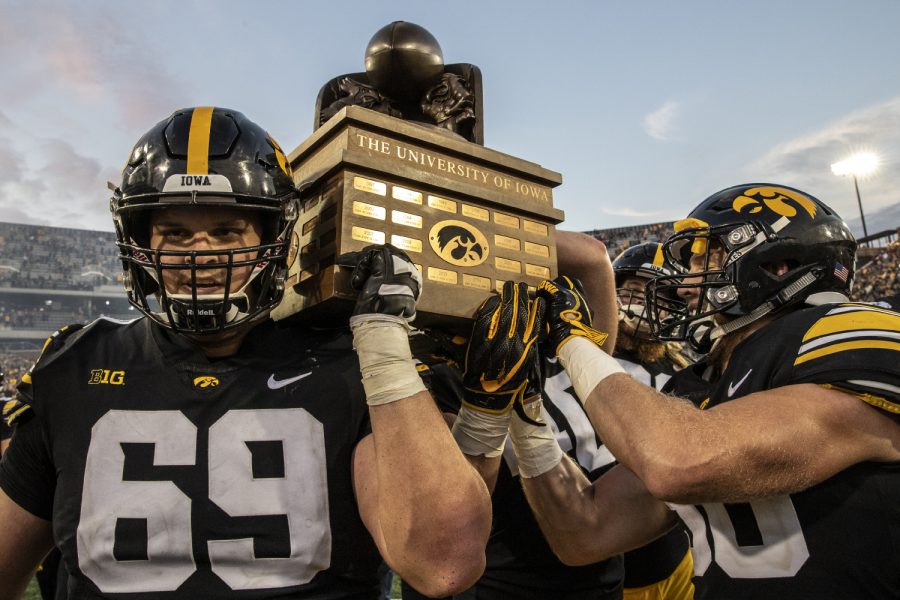 Iowa center Keegan Render and teammates carry the Cy-Hawk trophy off the field after Iowa's game against Iowa State at Kinnick Stadium on Saturday, September 8, 2018. The Hawkeyes defeated the cyclones 13-3.

Point-counterpoint: Debating the winner of this year’s CyHawk football game

The fact that ESPN’s College GameDay is headed to Ames for this weekend’s game might spell trouble for the Hawkeyes. They are 1-6 when playing where GameDay is being hustled. The only time that they’ve won on the show was back in 2009, when they upset No.4 Penn State in Happy Valley.

The show has never set up shop in Ames. Cyclone fans are guaranteed to be fired up for this game more than they’ve been in past seasons, especially since they’re eager to go 2-0 against in-state opponents.

Which brings up Northern Iowa. Hawkeye fans are all excited that it took the Cyclones three overtimes to knock off a ranked FCS team two weeks ago. Yet, what they’re overlooking is that the Cyclones did win that game and put up some impressive numbers.

Their passing game was on target. Brock Purdy completed 73 percent of his passes for 278 yards and 2 touchdowns. Wide receiver Deshaunte Jones had 14 receptions for 126 yards. Their defense also had its moments, as it totaled three sacks.

And though the running game is trying to replace David Montgomery, it still totaled a respectable 185 yards.

The game against Northern Iowa was far from pretty, but the Cyclones have had a bye week to reflect and recover. Their season is just as much in the mix as the Hawkeyes.

The Hawkeyes have not been in any games that have come down to the wire this season, but the Cyclones have. The line on the game is –2.5 on the Hawkeyes, so Las Vegas does expect this game to be close. Expect the Cyclones to come out on top in their second close game of the season at Jack Trice Stadium.

Ames, might become ground zero for the most potent mixture in the history of college football on Saturday. In Ames, Lee Corso, the Iowa Hawkeyes, and the Iowa State Cyclones will come together for one magical day. 2019’s iteration of the Cy-Hawk game might go down as the most highly anticipated sporting event to ever grace the gridirons of the Midwest.

On paper, the Hawkeyes and the Cyclones seem evenly matched. Sports books around the country reflect this notion. The favorite to win seems to vary from book to book. Whether the favorite listed is the Hawkeyes or the Cyclones, one thing remains constant: The margin of victory for the winning team is projected to be very thin.

The external factor that will have the greatest impact on the Cy-Hawk game is likely ESPN’s College GameDay. College GameDay is coming to Ames because the Hawkeyes are compelling, not because the Cyclones are 1-0. GameDay doesn’t show up for teams that barely beat Northern Iowa after three overtime periods. GameDay shows up for teams that have a shot to win the Big Ten, and the Hawkeyes will have a chance to do so this season.

Just before 11 a.m. Saturday Lee Corso will plop Herky’s head on his own. He will proclaim Hawkeye victory, and Ames will hear Hawkeye fans’ voices. The inflation Lee Corso gives the Hawkeyes and their fans will be too great for the deflated Cyclones to overcome. On Saturday, College GameDay will prove to be the X-factor that instigates a Hawkeye victory.