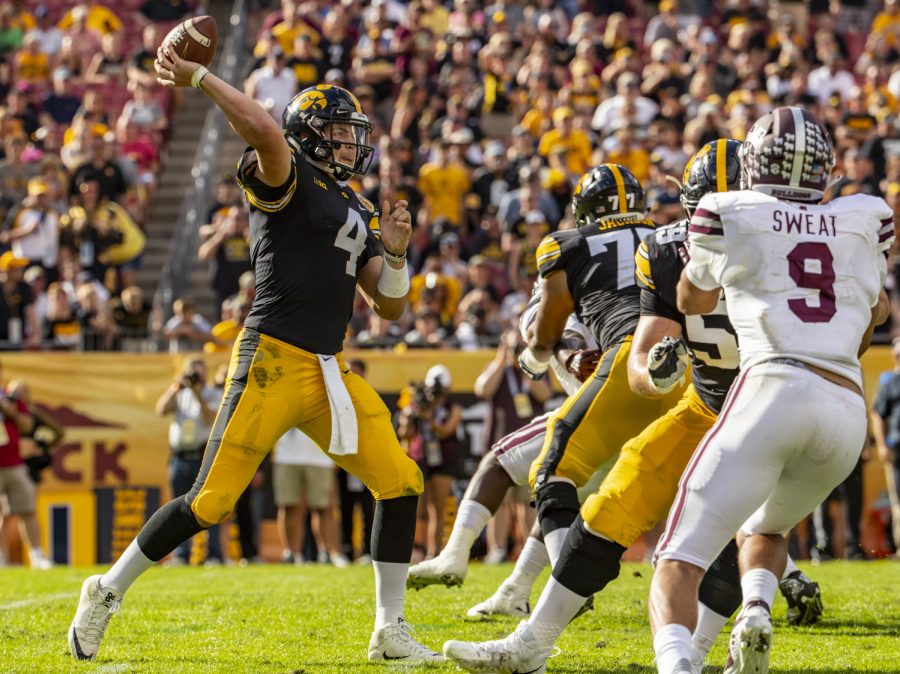 Iowa quarterback Nate Stanley throws a pass during the Outback Bowl game between Iowa and Mississippi State at Raymond James Stadium in Tampa, Florida on Tuesday, January 1, 2019. The Hawkeyes defeated the Bulldogs 27-22.

Hanging in the back of Iowa’s quarterbacks’ room is a picture of Chuck Long, one of the best quarterbacks to ever suit up for the Hawkeyes.

When looking at Stanley and Long play, there are quite a few similarities.

They both command their offenses. They both stand tall in the pocket. And they both throw a lot of touchdowns.

But Stanley is the Hawkeye quarterback on the cusp of history, chasing what Long has already accomplished. With 52 touchdown passes in the past two seasons, Stanley sits just 22 away from Long’s program record of 74 in a career.

As Stanley stood under the blue sky on a picture-perfect day for football wearing his black Hawkeye jersey with the patented gold pants, he pondered the chase for a piece of history that could become his in 2019.

With a 33-year-old record within striking distance, there are plenty of fans hoping Stanley will reach it. After all, he’s thrown 26 touchdowns in each of the past two seasons. It took Long four seasons to snag the record.

“I want him to break it, but he’s still got to play within himself,” Long told the DI. “You don’t want to get to the point where you’re so focused on that, that you start forcing the football and you don’t make good decisions. Those things will come. You just got to let that one come to you.”

Stanley hasn’t developed the bad habit of forcing things at Iowa. In his first season as a starter in 2017, he impressed with his decision-making ability, throwing only 6 interceptions. That mark increased to 10 in 2018, but he also upped his completion percentage from 55.8 to 59.3 percent in the two years.

Stanley’s chase for history has been a long time coming. In the third game of the 2016 season, Stanley finally got his chance to play in front of the Kinnick crowd.

When C.J. Beathard — who led Iowa to an undefeated regular season in 2015 — went down against North Dakota State, Stanley took command of the offense for part of a drive, going 2-for-2 for 45 yards, including a 37-yard strike to tight end George Kittle to set up the Hawkeyes’ final touchdown.

He won two bowl games in that stretch to capture Iowa’s first bowl victories since 2010 as well.

“He’s done a good job for two seasons for us. You hope all of your players are improving, and I think it’s really critical on any football team if your best guys aren’t improving or if they’re not playing their best, you’re not going to have a good football team, and Nate embraces that.”

Stanley has continued to develop on and off the field during his time in Iowa City.

It’s not unusual to find Stanley in Iowa’s facility watching film late at night. Sometimes, he brings a roommate to keep him company.

Whether he’s alone or with a friend, this is something Stanley has taken strides in and an important piece of a quarterback’s life that Stanley will need to continue if he’s going to capture the Big Ten West division title Iowa is chasing or shatter Long’s career touchdown mark.

“I always talk about the importance of preparation, but I think I didn’t understand that [as a freshman],” Stanley said. “In high school, I probably didn’t watch as much tape as I should have. People can rely on their athletic ability in high school and not have to worry about it as much. Then moving into college, I didn’t really understand the importance of it probably until the spring after my freshman year.”

His position coach has noticed the difference.

“His desire, his discipline, his determination to prepare on a daily basis and put the work in is really something,” Iowa quarterbacks coach Ken O’Keefe said. “That’s where he can help everybody else along. That preparation ultimately allows you to play with confidence on Saturday afternoons, and that’s what we’re after.”

Stanley’s teammates have played an important role in the numbers he has put up so far, and he’ll be the first to say so.

Hockenson and Fant heard their names called in the first round of the 2019 NFL Draft, while Easley signed with the Buffalo Bills as an undrafted free agent.

Nate Wieting and Shaun Beyer have taken up residence at tight end, and wide receivers Ihmir Smith-Marsette and Brandon Smith are set up for bigger roles.

If Stanley can navigate the new personnel in the huddle, he’ll put himself in a solid position to etch his name in the record books.

He’s confident in what the offense has to offer.

“We don’t think anybody’s just going to sit back and say, ‘Oh man, we lost [Fant and Hockenson], so we can’t move the ball,” Stanley said. “We expect ourselves to statistically improve every year. You’re really just excited for the guys that we have out on the field.”

As difficult as it can be to move on from a historic duo of pass catchers, this isn’t some façade Stanley puts up. He admitted he wouldn’t be within striking distance of Long’s touchdown record if it wasn’t for his teammates.

That humility is something some of the best Iowa quarterbacks have possessed, including the man Stanley continues to chase.

“[Long] was careful to avoid somehow being credited with doing more to generate a win than any of his teammates,” said Don Patterson, who was on the Hawkeye coaching staff when Long played and coached alongside Long from 1995-98. “He was always quick to give credit to his teammates and his coaches. That’s what smart quarterbacks do.”

Although he’s close to making a mark no other Iowa quarterback has made, Stanley isn’t focused on it. Instead, he’s driven to win a Big Ten West title in a year where the division is wide open.

At the end of the season, Stanley may not hold Iowa’s program record for most touchdown passes in a single season. But he could grab a Big Ten title. He’d settle for that. Or, if he’s once again capable of finding open targets and making good decisions as he has done in the past, he could have both.

“I’m hoping in the meantime on his way to fighting for a championship that he does break the touchdown record and put that one away,” Long said. “I’ve had that record long enough. It’s time for somebody else to have [it].”